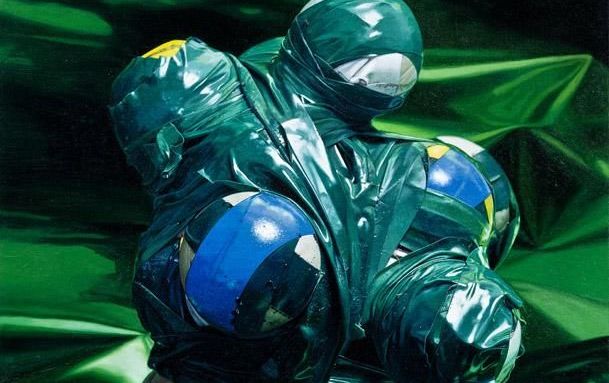 Josiah McElheny at Andrea Rosen, through June 30
An effective and engaging conceptualist, Josiah McElheny sometimes downplays his talents as a master craftsman. Some of the wood and mirror sculptures here are worn by performers who move through the gallery at various times and days during the course of the show, enabling visitors to see themselves reflected in the costumes. In the main space, wooden vitrines on tall metal stands hold elegant vessels made of blown and cut glass. The striped vessels appear almost as Op art sculptures as one moves around them, and their forms suggest abstracted female and male bodies.

Nicole Eisenman at Leo Keonig, through June 30
While it is no surprise that an artist with so profound a graphic sensibility would eventually turn to prints, the alacrity with which Nicole Eisenman has gained facility in such a wide range of mediums is amazing. Working with a number of skilled printmakers over the past two years, she turned her delirious eye, steeped in art history and pop culture in equal measure, to a variety of themes, heartbreak and humiliation not least among them.

Brent Green at Andrew Edlin, through June 23
Brent Green’s hand-drawn animated film installation combines the artist’s trademark mix of DIY craftiness and technological know-how. His latest piece, To Many Men Strange Fates Are Given, tells the story of the woman commissioned to sew a spacesuit for a Russian dog, but the plot becomes secondary to Green’s gee-whiz setup: his 3D animations are visible only when viewed through polarized lenses (either via pairs of hand-crafted eyeglasses or a rectangular screen in a steel frame), and the soundtrack-mostly Green’s own frantic, breathless narration with twangy background music-is piped in through carved wooden phonograph horns.

Picasso and Françoise Gilot at Gagosian Madison Ave., through June 30
This show, the fourth in the gallery’s John Richardson-curated Picasso series, contains some well-known but rarely exhibited paintings, sculptures, ceramics and prints by Picasso, as well as a selection of paintings and drawings by his muse and lover, Françoise Gilot. Gilot’s deep admiration for Braque must have kept Picasso on his toes, and it’s clear that both artists inspired each other long after their 10-year relationship ended.

Philippe Decrauzat at Elizabeth Dee, through June 23
A group of shaped canvases in acrylic by Lausanne-based Philippe Decrauzat set the small gallery abuzz. Four have wavy edges and undulating lines, creating an intensely optical effect, and the other four are narrow, vertical, monochromatic strips in various permutations of the diagonal. It is a most elegant installation, effectively conveying the artist’s intent to produce a “graphical sentence that ultimately makes a loop.” In the back, another loop flickers, in the 16-mm film Screen-o-Scope, showing light blinking through branches, excerpted from Kurasawa’s Rashomon.

Neil Gall at David Nolan, through June 2
The lumpy forms of taped-together ping-pong balls is an odd choice of muse, but the British artist Neil Gall’s take on these bound orbs is strangely compelling. The balls take center stage in several large, lush oil paintings, augmented with images of shattered glass or a mysterious viscous fluid dripping over the central form.

Addie Herder at Pavel Zoubok, through June 23
Addie Herder’s intimate, complex collages incorporate all manner of ephemera, from scraps of shiny foil and colored paper to toothpicks, matches and feathers. Herder, who died in 2009 after decades of peripatetic art-making in both New York and Paris, made mostly abstract constructions that look alternately like machinery diagrams, dollhouse rooms, cityscapes and game boards.