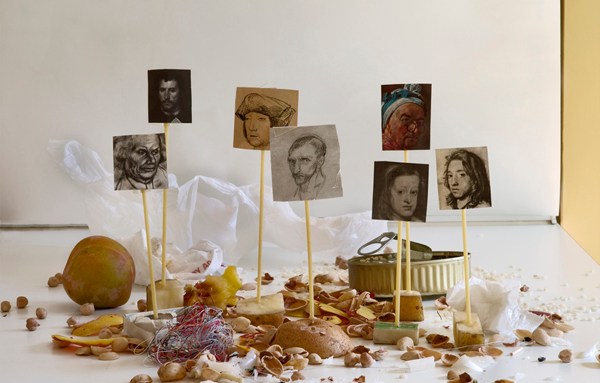 Dasha Shishkin at Zach Feuer, through June 11
What is going on in these chaotic, candy-colored storyboards? it’s impossible to tell. Scenes filled with neon yellow nudes and figures with Pinocchio noses and weird hats are set in hybrid restaurant-factory- shopping-mall interiors. It’s something out of a Dr. Seuss fever dream.

Lorna Simpson at Salon 94, through June 18
All the work in “Momentum” is inspired by one event: 40 years ago, when Simpson was 11, she performed in a ballet at Lincoln Center. Simpson remembers being covered in gold, and has made a video with professional dancers in gold body paint, gold ballet shoes, etc. It’s accompanied by photographs of Avery Fisher Hall printed on felt and a series of serigraphs of women with elaborate hairdos embossed with gold powder.

Li Songsong at The Pace Gallery, through Aug 5
Li Songsong is well known in the People’s Republic of China for super-thick paint and blocky compositions that seem to waver halfway between their photographic sources and pure painterly abstraction. His 11 large-scale oil paintings reference images that are fraught with historical, political or intensely emotional content, but Li decontextualizes his sources by zeroing in on minor details and surrounding them with seemingly arbitrary geometric constructs.

Isabella Kirkland at Feature, through June 18
A cross between John James Audubon, Walton Ford and Alexis Rockman, Kirkland’s lush paintings and inkjet prints are teeming with plant and animal species that have been discovered in the past 20 years. More ominously, other works resembling Dutch still lifes show species that have recently died out or are facing extinction.

Amelie von Wulffen at Greene Naftali, through June 18
There are a bunch of big, colorful, mostly abstract (but for occasional eyeballs or tentacle-like hands playing the piano) paintings in Amelie von Wulffen’s latest show, but the real story is told in November, a “month in the life” comic that unfolds, in German and English, across dozens of notebook pages tacked to the wall.

Gonzalo Puch at Julie Saul, through July 1
Spanish artist Gonzalo Puch’s photographs of quirky still-life arrangements or environments are pleasing enough. But his strange 5-minute video, in which constructions of random objects-plants, shopping carts, bubbles, drywall-are rolled through or spun in circles in a laboratory-like space, either seemingly self-propelled or by assistants in white jumpsuits, is even more engaging.

Ori Gersht at CRG, through June 25
The large-scale color photos of cherry trees and other landscapes in “Falling Petals” were taken last spring, in Japanese cities affected by World War II. In the back room, a film presents a related topic, though much more intimately: on one screen we see Yeudith Arnon, a now-elderly dancer and choreographer who survived Auschwitz, seated in a rocking chair, next to a screen showing a barren, snowy field; when she refused to dance for SS officers, Arnon was ordered to stand barefoot in the snow.

Simon Evans at James Cohan, through June 11
In his Letter to the Future, a small embroidery made to look like a sheet of yellow legal paper, Simon lists the fact that our mannequins have nipples and that we are lazy and use blunt tools as markers of our present condition. Other works, often maps and charts, incorporate tiny, meticulous text, cut-out faces, tape and colorful scraps of paper.

Sonya Blesofsky at Mixed Greens, through June 11
The subtlety of Sonya Blesofky’s installation “Tenement” makes it easy to overlook. Everything in the gallery-from architectural details like cornices, arches and a decorative ceiling medallion to more practical things like a wall-mounted sink and pipes and a “basement” filled with mouse traps and cinder blocks-is painstakingly constructed paper, cardboard and foil.