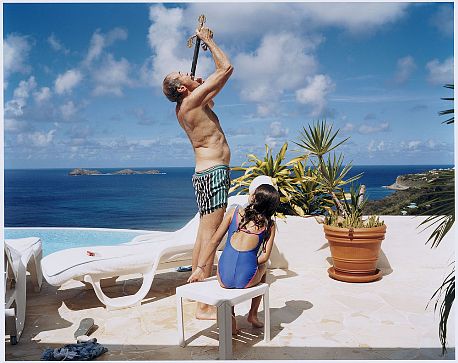 Nadia Khawaja at Thomas Erben, through July 22
For her first solo show in the U.S., Lahore-based Nadia Khawaja has brought out a diverse body of work. Examples include a grid of 30 small color photos, all diptychs; videos that incorporate urban noises with close-ups of the artist’s face; and several intricate large-scale pen drawings that alternately resemble close-ups of fingerprints, vascular systems and tangled rope.

Jan Frank at Paul Kasmin, through June 18
The 30 recent drawings in this suite, accompanied by one painting, are rendered in ink and correction fluid on handmade paper. The trailing, energetic lines, offset by areas deliberately obscured or “veiled,” create a graphic dance that alludes to, without aping, Abstract Expressionism—especially the work of Frank’s fellow Dutch émigré Willem de Kooning.

Rene Ricard at 522 W. 23rd Street, through June 23
Sixty-five-year-old poet, art critic and scenester Rene Ricard was an early champion of Julian Schnabel, whose art-impresario son, Vito, here returns the favor by filling a Chelsea showroom with a selection of new paintings collectively titled “Sonnets from the Portuguese” (a reference to a series of 19th-cenury love poems by Elizabeth Barrett Browning). It’s difficult to say exactly what relationship-except irony—the canvases have with the high seriousness of Victorian verse, but they’re certainly good fun to look at and puzzle over.

Richard Long at Sperone Westwater, through June 25
Richard Long takes on Sperone Westwater’s vast new (as of last fall) space on the Bowery, filling the gallery with his site-specific meditations on nature and travel. A giant mud-and-acrylic orb, 27 feet in diameter, is accompanied by photographs, text installations and smaller mud-on-slate wall pieces.

New Yorker Fiction/Real Photography at Steven Kasher, through July 9
Do you ever wonder how the photos that accompany the stories in the New Yorker are chosen? Steven Kasher’s show (organized with recently departed visuals editor Elisabeth Biondi), features 40 images published over the last 13 years, alongside excerpts of the stories they accompanied. On June 23, the gallery is hosting a panel discussion with Biondi, fiction editor Deborah Treisman, writer A.M Homes and photographer Malerie Marder.

Jiro Takamatsu at McCaffrey Fine Art, through July 1
Despite being involved in the Mono-Ha movement and a co-founder of the Hi Red Center collective, Jiro Takamatsu (1936–1998) is not well known in the West. This show, his second in two years at McCaffrey, includes sculptures (many in response to the Minimalist cube), paintings and drawings completed between 1965 and ’73.

Julio Galán at Ramis Barquet, through July 9
This retrospective offers several major works that are among the best the Mexican-born painter produced in his all-too-brief career (he died in 2006 at age 48). Galán’s raw, figurative canvases incorporate references to Catholic and pre-Columbian iconography, Mexican folk traditions and pop culture.

Peter Blake at Mary Ryan, through June 18
Often called the godfather of pop art, Peter Blake will probably always be best known for his cover design of the Beatles’ Sgt. Pepper’s Lonely Hearts Club Band. But the British artist’s work has a boarder range that comes across in this witty show of new inkjet images on paper and canvas.

Nobu Has Finally Opened a Hotel and Restaurant in Georgia