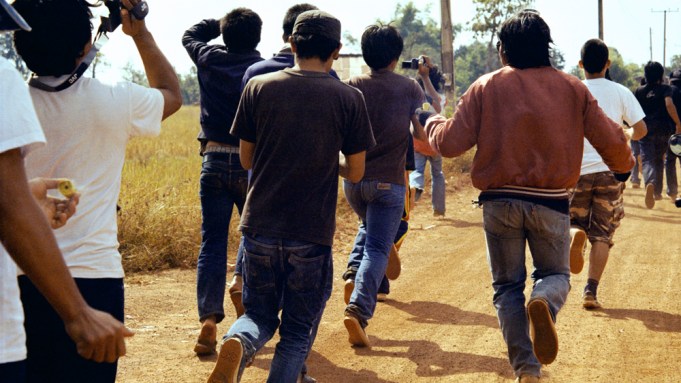 This week we check out adults-only comics from the ’60s and ’70s at Andrew Edlin, Diana Shpungin’s ode to her father at Stephan Stoyanov and B. Wurtz’s whimsical sculptures made from discarded household materials. See all 10 picks below.

“Leads to Another” at Kate Werble, through July 10
This formal, astute group show about “layering,” by four up-and-coming artists, rewards attentive viewing. A patch of black flooring, something like a hybrid of Carl Andre and Frank Stella, consists of birchwood slats puzzled together and painted (Ryan Reggiani); subtly volumetric computer-generated grids-on-paper are folded then flattened, photographed, re-folded, opened and framed (John Houck); and a wallful of canny little eye-popping paintings on T-shirts (Nathan Azhderian).

Judy Ledgerwood “April Showers” at Tracy Williams, through July 1
Each of the eight large canvases in the gallery’s main space features a rounded four-leaf clover shape on a drippy background. Ledgerwood’s contrasting color choices—like glistening cobalt and gray or velvety brown and fuchsia—electrify the room. The star of the show is an installation of two fabric-like wall paintings with eight ceramic vessels resting on the floor, united by similar circle-and-diamond patterns.

“Eraser” at Magnan Metz, through July 8
Summer group shows often come with forced themes, but “Eraser,” exploring the limits of what is visible, legible or audible, gels. Standouts include Curtis Mann’s large color photos, chemically altered with bleach to produce a shimmering, splotchy orb in the middle of the image, and Shanti Grumbine’s cutout and erased newspapers, each framed and hung above a little shelf piled high with the clippings. Don’t sneeze anywhere near these.

B. Wurtz at Metro Pictures, through Aug. 5
B. Wurtz’s drawing Important Things lists eating, sleeping and keeping warm. To that he should add making neatly constructed, playful sculptures from old food labels, plastic bags, shoelaces, yogurt lids and little blocks of wood. Never have the contents of the recycling bin and junk drawer looked so good.

“Zap: Masters of Psychedelic Art, 1965–74” at Andrew Edlin, through June 25
Co-curators Gary Panter and Chris Byrne have collected work by all seven artists featured in the early issues of the underground comic Zap, first published in San Francisco in 1968 (since then 14 additional issues have sporadically come out, most recently in 2005). Zap #1 included an early appearance by R. Crumb’s characters Mr. Natural and Flakey Foont. Chaotic, sexually grotesque and funny drawings by Victor Moscoso, Rick Griffin, S. Clay Wilson, Gilbert Shelton, Spain Rodriguez and Robert Williams round out the show.

Eric Fischl at Skarstedt, through June 18
At first glance, the nine early paintings (1979–89) in this concise show give off an easy, summertime vibe, with young people lounging on a boat with a Dalmation and kids playing in swimming pools while Dad grills off to the side, everyone sun-drenched and relaxed. Why, then, does it feel like we’re spying on something dangerous and naughty?

Diana Shpungin at Stephan Stoyanov, through July 3
For almost ten years, Diana Shpungin worked collaboratively with fellow artist Nicole Engelmann on various projects that explored themes of violence, the media, fashion, sexuality and childhood play. Now that Shpungin has broken out on her own, she’s showing highly personal, intimate work (sculptures, drawings, a hand-drawn animation), much of it memorializing her father. In one of the strongest pieces a bare orange tree balances on two stacks of newspaper obituaries.

“Apichatpong Weerasethakul: Primative” at the New Museum, through July 3
Eight related videos, all shot at night, look into the dreams, myths and history surrounding Nabua, a town in rural Thailand. In one, residents work on a handmade spacecraft, despite being interrupted by fighting dogs and other violence; another features teenage boys kicking around a flaming soccer ball.

“Spring Round Up” at The Proposition, through June 26
Imaginative figurative paintings by Megan Burns and Balint Zsako harmonize with Ben Bunch’s colorful constructions on pedestals that resemble electrical engineering contraptions. If it’s plumbing fixtures you’re after, there’s a small Bidet, a rather bizarre object by Pavel Kraus, which also looks like an elaborate architectural model—perhaps for the Guggenheim—made of marble, resin and lapis lazuli.