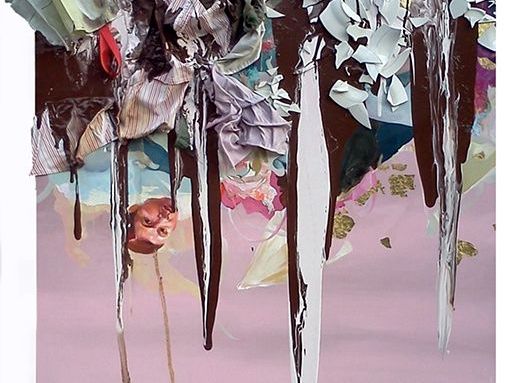 This week we check out Jayson Musson’s colorful sweater-paintings at Salon 94, Mark Flood’s bitingly funny paintings and collages at Luxembourg & Dayan, and an art-world tribute to man’s best friend at Metro Pictures.

James Lee Byars at Michael Werner, through Aug. 31
Created in 1989, Byars’s gilded marble and wood Monument to Cleopatra, a sarcophogus-like lozenge form on a low plinth, is a breathtaking presence in this summer’s Upper East Side gallery scene. Glowing mysteriously in an empty room, it evades human scale, minimalist concreteness as well as historical allusiveness. Yet all three of those qualities could apply to this work. The piece has never been seen before in New York, and it is well worth a pilgrimage.

Mark Flood at Luxembourg & Dayan, through Sept. 29
In what has to have been the most caustic (and funny) voice in 1980s appropriation art, Texan Mark Flood blasted consumerist culture in collages, paintings (altered thrift-store canvases) and objects. A generous survey of these largely forgotten works, curated by Alison Gingeras, makes it seem as though Floods work is the source for every scrap of counterculture poetics that followed. The subject matter is certainly diverting, but don’t miss the canny formal brilliance of the works, which deploy doubling and elision in curious ways.

Jayson Musson at Salon 94, through Aug. 17
Jayson Musson, better known for his art world-skewering YouTube videos recorded by his altar-ego Hennessy Youngman, has ten of his textile-stretched-over-linen canvases on view at Salon 94’s Bowery outpost. Made from disassembled and reconfigured Coogi sweaters (most likely to be worn by hipsters dressing up as Bill Cosby for Halloween), the colorful textured fabric pieces look like unusually vibrant topographic maps.

“Dogma” at Metro Pictures, through Aug. 10
Some scientists say that without dogs to assist in livestock management, humans would not have become nearly so numerous. So dogs are partly to blame. Swiss Institute director Gianni Jetzer’s show “Dogma,” at Metro Pictures, assembles works about canines by 20 artists, from Allora/Calzadilla to Christopher Wool. Tipping off the viewer to the show’s skeptical take on man’s best friend is Claire Fontaine’s neon piece at the entrance, which spells out an expression coined by Bertolt Brecht: Kultur ist ein Palast der aus Hundescheiße gebaut ist (culture is a palace built of dog shit).