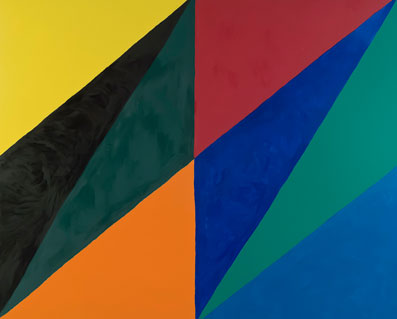 With an ever-growing number of galleries scattered around New York, it’s easy to feel overwhelmed. Where to begin? Here at A.i.A., we are always on the hunt for memorable shows that stand out in a crowded field. See below for an abbreviated summer “Lookout” of five of the best shows we saw this week, featuring black-and-white photographs by both Miroslav Tichý and Malick Sidibé, Mark Wagner’s collages made from thousands of cut-up $1 bills, delicate sculptures and etchings by the late Christopher Wilmarth, and yet another strong group show of abstract paintings.

Mark Wagner at Pavel Zoubok, through Aug. 12
If you’ve ever seen one of Mark Wagner’s mind-bogglingly intricate currency collages and wondered how he does it, spend some time in front of the customized trunk in his current show. It is fitted with a time-lapse video of Wagner piecing together the monumental collage Liberty on view in the gallery, plus various models, drawings and tools of the trade.

Miroslav Tichý at Horton, through Sept. 10
This is an intimate show of hazy, rough-hewn photographs by the self-taught Czech artist who died in April. The black-and-white prints, some mounted on scraps of faded colored paper, feature semi-nude female bathers in his hometown, one of Tichý’s recurring subjects. The gallery is also screening a fascinating documentary about the artist by Roman Buxbaum.

“The Ghost in the Machine” at Lennon, Weinberg, through Aug. 19
Artist Stephen Westfall selects a dozen eye-popping compositions, among them a splintery scaffolding by Nicholas Krushenik from 1977, jostling triangles by Harriet Korman, and Westfall’s own Ariel, a 104-inch-square mural of raking and colliding stripes that brings the gallery’s back wall alive.

Christopher Wilmarth at Betty Cuningham, through Aug. 12
Two very different bodies of work pair up nicely in this somber show. In the front room is a series of abstract etchings from 1981 that Wilmarth created in response to a new translation of poems by Stéphane Mallarmé, and in the back are several glass and steel sculptures, some angular maquettes for larger pieces, and other works cleverly mounted on the wall with cables.

Malick Sidibé at Jack Shainman, through Aug. 5
In the late 1950s, Malick Sidibé opened a commercial photography studio in Bamako, the bustling capital of Mali, and has been snapping group and solo portraits, plus vibrant street and nightlife scenes, ever since. These large, ovoid clusters of vintage and contemporary prints—many mounted on colorful, patterned backgrounds—are an endlessly entertaining record of Bamako life.