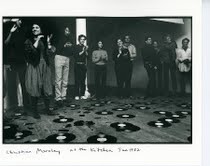 With an ever-growing number of galleries scattered around New York, it’s easy to feel overwhelmed. Where to begin? Here at A.i.A., we are always on the hunt for memorable shows that stand out in a crowded field. See below for an abbreviated summer “Lookout” of five of the best shows we saw this week, from genteel 18th-century pastels at the Met to a historical look at the Kitchen’s early years in SoHo.

Harun Farocki at MoMA, through Jan. 12
MoMA has organized a comprehensive exhibition to celebrate their recent acquisition of nearly four-decades’ worth of the Czech-born artist’s videos and installations. The highlight of the show is the four-part Serious Games, which juxtaposes video games with real-life wartime simulations. Other works, featuring Farocki’s well-known mash-ups of appropriated footage (from surveillance cameras, political propaganda, protests, etc.) and his own material, are also on view.

“Pastel Portraits: Images of 18th-Century Europe” at the Met, through Aug. 14
What with all the Alexander McQueen brouhaha, you may have walked right by this exquisite sleeper of a show: 40 large pastel portraits from an era that held the medium in esteem. In the hands of the masters, pastel’s brilliant colors and sheer malleability bring to life a range of vivid characters, from elegant courtiers to stalwart farmers.

Eunah Kim at Illuminated Metropolis, through Sept. 3
Dozens of drawings, prints and collages are hung salon-style in this crowded show (the gallery keeps odd hours so check the website) memorializing Korean-born Kim, who died last year, at 37, from lung cancer. “The Journey Beyond” includes work inspired by a range of influences, from religious stories (Kim was raised Catholic but had long practiced Zen Buddhism) to Fluxus to the female body.

“The View from a Volcano: The Kitchen’s SoHo Years, 1971–85″ at the Kitchen, through Aug. 27
To celebrate its 40th anniversary, the long-running gallery/theater is paying homage to the 15 years it spent in a building on Wooster and Broome, before decamping to its current location in the mid-1980s. Videos and other ephemera documenting these heady early years remind those traipsing around the Chelsea of today of the Kitchen’s decades-long commitment to experimental, performance-based work by artists like Kitchen co-founders Woody and Steina Vasulka, Laurie Anderson, Meredith Monk, Charles Atlas and many others.

The Greenworks 60V 21-Inch Self-Propelled Mower Makes Big Claims, But Does It Deliver?