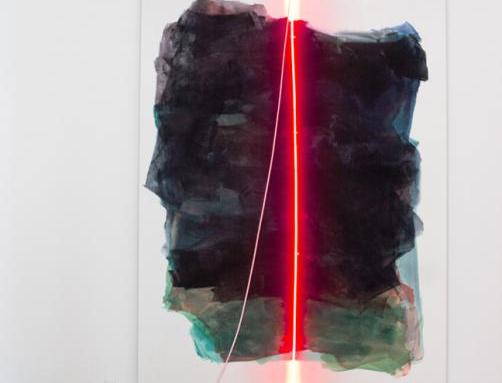 This week we check out Mary Weatherford’s literally electric painting/neon hybrids at Brennan & Griffin, Michelle Stewart’s mysterious and engaging photo grids at Leslie Tonkonow, and a well-curated show of art made by American artists based in Paris during the postwar years at Loretta Howard.

Mary Weatherford at Brennan & Griffin, through Oct. 14
The bold, brushy abstractions in Mary Weatherford’s last show at the gallery were inspired by the interiors of caves along the California coast. This time the L.A.-based artist switches things up, drawing on her time in New York in the ’80s and ’90s. Each of Weatherford’s half dozen canvases feature layered, multi-colored swaths of paint dramatically augmented with one or more neon tubes.

Analia Saban at Tanya Bonakdar, through Oct. 20
Despite Analia Saban’s participation in many international exhibitions, “Gag” is her first show in New York. Installed in Bonakdar’s upstairs galleries, the selection highlights Saban’s skill at using traditional art-making materials in exactly the way you wouldn’t expect-there’s a mostly raw canvas, lightly flecked with paint, with an attached toilet brush cast in acrylic, and approximately 110 pounds of still-wet oil paint heavily pooled in a horizontal sling made of canvas.

Michelle Stuart at Leslie Tonkonow, through Oct. 27
Better known for her participation in the Land art movement of the 1960s and ’70s, Michelle Stuart here presents eight new works, each made up of a grid of photos. The mostly black-and-white and sepia-toned prints include original and appropriated images, some digitally altered and other left as is. Stuart’s sources are mysterious; some images seem culled from a prairie road trip decades (if not longer) ago, while others depict crop circles, dead bugs, wild animals and spookily rendered people.

Phil Wagner at Untitled, through Oct. 14
Including bicycle wheels, metal scraps and stereo speakers, the gritty materials of Phil Wagner’s wall-hung, spray-painted constructions were mostly salvaged from the streets and junkyards of East L.A. Don’t miss the trio of gestural charcoal drawings on brown paper near the front desk.

“The Lure of Paris” at Loretta Howard, through Nov. 3
Forget An American in Paris. In the 1950s, the streets of the French capital saw more political demonstrators than dancing U.S. expatriates. Yet the city’s mix of established culture, an active avant-garde, racial and sexual tolerance, café society and humanist concerns attracted many American artists. Curator and critic Saul Ostrow presents work from 17 painters and sculptors, including Norman Bluhm, Shirley Jaffe, Jules Olitski and Jack Youngerman.