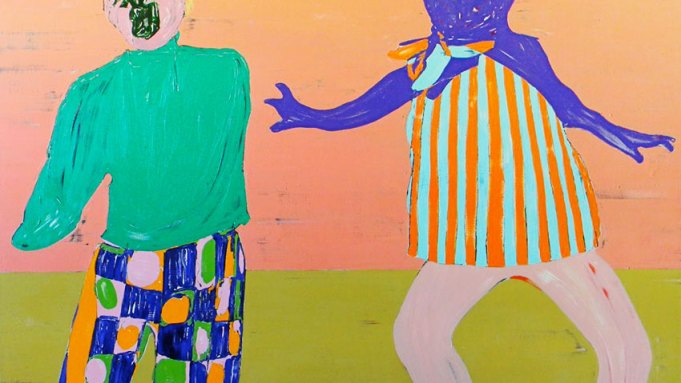 With an ever-growing number of galleries scattered around New York, it’s easy to feel overwhelmed. Where to begin? Here at A.i.A., we are always on the hunt for clever, memorable shows that stand out in a crowded field. Below are eight fall shows our team of editors can’t stop talking about.

This week we check out Stefanie Gutheil’s nightmarish paintings and sculptures at Mike Weiss, subway-inspired work on paper by William Anastasi and N. Dash at Nicole Klagsbrun, and Leandro Erlich’s elevator fun house at Sean Kelly.

Stefanie Gutheil at Mike Weiss, through Oct. 8
Where in Berlin does Stefanie Gutheil live, if, as the press release explains, these gruesome paintings and sculptures are based on people she encounters in daily life? The dozen or so mixed-medium paintings in “Dreckige Katze” (Dirty Cat) narrate a chaotic story populated with oversize animals, toothy monsters and figures puking in colorful striped arcs.

William Anastasi/N. Dash at Nicole Klagsbrun, through Oct. 22
William Anastasi (b. 1933) and N. Dash (b. 1980) both have the NYC MTA to thank for their works on view here. The elder’s ongoing series of subway and pocket drawings, spanning four decades, entails him holding pencil to paper, eyes often closed, simply recording the jerking motion of the train or of his gait while he walks with his hands in his pockets. N. Dash uses her commuter time to methodically fold, unfold and refold pieces of paper, the worn creases creating geometric patterns that are enhanced by graphite or indigo pigment.

Nicola Tyson at Friedrich Petzel, through Nov. 5
British-born Nicola Tyson’s eight, large-scale compositions, made up of broad, brittle brushstrokes and acidic hues, set the stage for riveting psychodramas pulled from the artist’s imagination. Self-Portrait with Friend, featuring an armless figure and a toilet-like form, is a highlight.

Jennifer Dalton at Winkleman, through Oct. 15
Everyone’s been talking about Jennifer Dalton’s indignant observation-in the form of colorful hand-drawn graphs and charts and rows of mini framed photos—of big-name TV and radio personalities’ lack of women guests on their shows. The press release, written in the form of an open letter addressed to Jon Stewart, Leonard Lopate, Charlie Rose, et al., expresses Dalton’s conflicted feelings about continuing to admire these “cool guys” in spite of her recent discoveries.

Leandro Erlich at Sean Kelly, through Oct. 22
No, the gallery did not actually excavate its cement floor to construct an elevator shaft caught between levels. But the illusion, a mirror trick, is really convincing. Erlich’s exhibition “Two Different Tomorrows” is titled for the confusion that results when communicating across time zones, and includes several complex installations, all involving elevators-a row of three whose “reflections” are created by their mirror opposites, a sideways shaft you can walk through and a set of doors that opens to reveal a video filmed inside a crowded Tokyo elevator.

Serban Savu at David Nolan, through Oct. 22
It feels like something ominous is about to happen in Serban Savu’s paintings of his native Romania, though the peopled landscapes depicted are perfectly serene and mundane-a group of men stand around in swim trunks, a couple takes a stroll, two men go fishing. Don’t miss the back room, which contains a wonderful painting of a funeral scene that manages to be both gloomy and festive.

Rosy Keyser at Peter Blum, through Nov. 12
Rosy Keyser’s tactile and satisfyingly messy paintings look like they’ve been rescued from a long-ago abandoned barn or carpentry workshop and adorned with patches of glossy paint, strands of rope encased in copper foil, beads and, in one case, a constellation of hammered-in nails.

Salud, Skoal and Cheers — The Best Whiskies to Drink on World Whisky Day