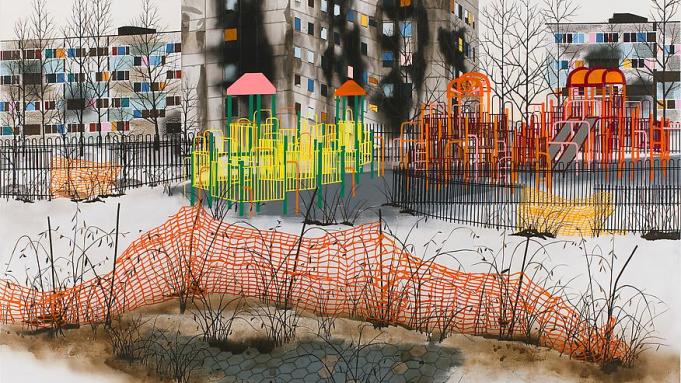 With an ever-growing number of galleries scattered around New York, it’s easy to feel overwhelmed. Where to begin? Here at A.i.A., we are always on the hunt for thought-provoking, clever and memorable shows that stand out in a crowded field. Below are eight fall shows our team of editors can’t stop talking about.

This week we check out a historical show of work by artists associated with North Carolina’s Black Mountain College at Loretta Howard, hand-drawn animations by up and coming Katie Armstrong at BravinLee programs, and Richard Serra’s mazelike steel sculptures that make Gagosian’s vast gallery feel crowded.

Erik Benson at Edward Tyler Nahem, through Oct. 21
Erik Benson’s paintings are almost not paintings. He makes his large-scale cityscapes, which show desolate corners of nondescript places, by pouring acrylic paint onto glass, letting it dry, and then meticulously cutting and collaging bits and pieces onto the canvas. The results are startling beautiful compositions in which each brick and leaf, even detritus, seems precious.

“Black Mountain College and its Legacy” at Loretta Howard, through Oct. 29
Led from 1940–49 by Josef Albers, the unorthodox art program at the North Carolina college was formed by energizing faculty members including John Cage, Robert Motherwell, Buckminster Fuller and Merce Cunningham, and spawned high-octane students such as Robert Rauschenberg, John Chamberlain, Ray Johnson and Cy Twombly. All of these artists and more are well represented in this museum-quality exhibition, curated by Robert S. Mattison and Loretta Howard.

Katie Armstrong at BravinLee programs, through Oct. 15
Just 23 years old and a year out of the School of Visual Arts, New York artist Katie Armstrong has produced two fetching animated short videos that combine her drawings and her spoken or sung soundtracks, one of them a strange a cappella version of Britney Spears’s “…Baby One More Time.”

“After Shelley Duvall ’72 (Frogs on the High Line)” at Maccarone, through Oct. 22
Artist Bjarne Melgaard organized the show “After Shelley Duvall ’72,” which includes the work—or the complicity—of at least 20 artists and critics, all amounting to a big messy Melgaard stage set. The centerpiece and highlight is a video featuring the artist interviewed and uncomfortably confronted about his aggressive appearance and tendencies.

Anthony Goicolea at Postmasters, through Oct. 15
Anthony Goicolea addresses John Ruskin’s “pathetic fallacy” concept (treating inanimate objects as if they had feelings) via a series of layered drawings on Mylar. The human body and nature interact in ways both violent and intimate: a spinal column anchors a tree trunk; a lung grows inside an evergreen; the skeletons of a girl and an animal crouch down facing each other, locked in an embrace.

Nick Cave at Jack Shainman, through Oct. 8
Last chance to see the latest of Nick Cave’s elaborate, body-concealing soundsuits. This time the sculptural garments are more sleek and monochrome—there are several made of what looks like the yellow-white fur of a long-haired dog, plus groupings constructed from shimmering metallic or pearlescent buttons.

Meredyth Sparks at Elizabeth Dee, through Oct. 29
The mostly two-dimensional works in “Striped Bare, Even and Again” further Meredyth Sparks’s interest in appropriated photos by marrying digital prints of domestic objects like radiators, blinds and armoires with patterned fabric. Sparks stitches the disparate elements together by hand, leaving a narrow gap between the two: this pulled-apart space creates a palpable sense of tension in her otherwise sedate canvases.

Richard Serra at Gagosian, through Nov. 26
It’s thrillingly easy to get lost while walking through Richard Serra’s new weathered steel sculptures (there are just two, but it feels like more). Junction looks like two interlocking stretched-out S-shapes, while Circuit is more of a three-pronged ellipse; with both, you’re never sure when you’ve reached the center and it’s always a surprise to find yourself spit out on the other side of the gallery.