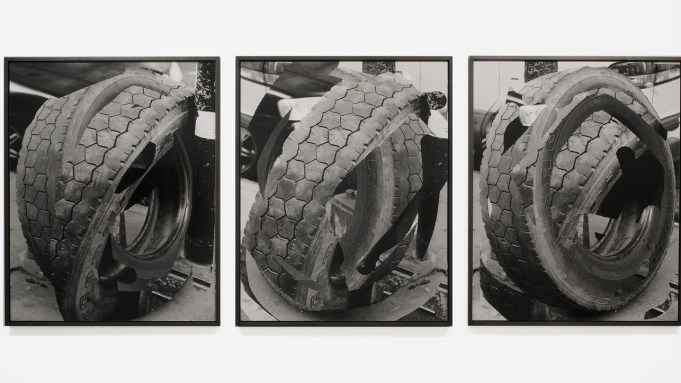 Lucas Blalock at Ramiken Crucible, through Dec. 23
Lucas Blalock’s wonderfully mysterious photographs start with a picture shot on film (using an old-fashioned 4×5 camera), most often a tabletop arrangement of low-end, mass-produced objects like shower caps, tires or sponges. He then Photoshops the snapshots, ending up with images that range from straightforward representations to near-abstractions.

Jim Hodges at Gladstone, through Dec. 23
Gladstone’s 24th Street space features three of Hodges’s distinct environments. An all-white room has Day-Glo paints squirting from nozzles in the ceiling; a darkened room features a disco ball slowly descending into a dark pool of water in the gallery floor. Glittery black mirrored panels are rehung by hired models at the end of each day, to appear on one wall as a large ball by the show’s closing day. On 21st Street, four huge boulders are each partially inlaid with a thin veneer of colorful, shiny car metal; upstairs is a new series of large, scratchy landscape photos.

Suzanne McClelland at Sue Scott, through Jan. 1
For sheer scope and variety, this is Suzanne McClelland’s boldest exhibition ever. In the front gallery, her word paintings range from stunning little atmospheric gems to a wall-size installation. In the back, she collaborated with Theresa Friess on some very cool videos looping TV instants of transformation from “Bewitched” and “Wonder Woman,” and a large wall projection more abstract in its sampling-all very magical.

Jason Middlebrook at Dodge, through Dec. 23
Jason Middlebrook’s abstract paintings on large planks of wood sound like they could be crafty or dashed-off, but they are nothing if not elegant. The Hudson, N.Y.-based artist covers the smooth maple, redwood, elm and walnut panels with jagged, parallel lines of both multicolored and monochrome acrylic paint, working with the wood’s natural nooks and crannies.

STO at Mulherin + Pollard, through Dec. 31
Lots of Lower East Side galleries are about the size of a studio apartment, and Mulherin + Pollard’s front room is no exception. The artist, musician and curator known as STO (also owner of Cinders Gallery in Williamsburg) has re-created the trappings of grungy apartment living—underwear on the floor, takeout containers in the fridge, paintbrushes in the sink-entirely with colorfully painted papier-mâché.

Nan Goldin at Matthew Marks, through Dec. 23
Invited into the Louvre to photograph masterpieces to her heart’s content, Nan Goldin created an uncanny doubling with her own painterly images of the beautiful, dramatic, lost people of her world. Too bad about the queasily solemn musical score and voiceover of the slide-show audio—but close your ears: the visuals are worth it.

Esther Kläs at Peter Blum Chelsea, through Jan. 7
You’ll find yourself thinking of Rachel Harrison, Carol Bove, Gedi Sibony, Ian Kiaer and the like at this debut solo by German-born artist Esther Kläs. Body parts, architecture, sculptural bases and language (via trilingual titles) all come under consideration in these smart, diffident abstractions.