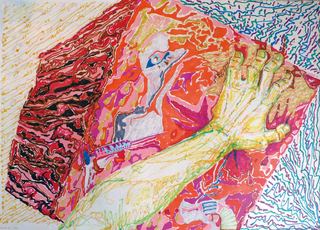 George McNeil at Ameringer McEnery Yohe, through Jan. 21
This is a chance to see a generous selection of McNeil’s robust abstractions, mainly from the ’60s. In each work, a surprisingly broad palette is applied in boldly brushed strokes and passages. The raucous figuration of the artist’s later work is suggested-but here we understand the pure energy that would animate his later work.

Peter Liversidge at Sean Kelly, through Jan. 28
“History will be kind to me, for I intend to write it,” quipped Winston Churchill. An illuminated sculpture by Peter Liversidge on the gallery’s facade takes a slightly more skeptical view, spelling out “Will History Be Kind.” Inside, the young English artist brings a playful spirit to conceptual art, with dozens of exhibition proposals on view as printed-out typewritten pages; various other interactive works make this a very dryly entertaining show.

Stan Brodsky at June Kelly, through Dec. 30
Stan Brodsky’s large, lyrical abstractions feature what catalogue essayist Phyllis Braff aptly calls “ribbons” of oil paint “that seem to be dancing” on the paintings’ surfaces. These recent works synthesize the painter’s recollections of a trip to the Brittany region of France, and indeed the canvases evoke a sunny, joyous atmosphere.

Yorgos Sapountzis at Simone Subal, through Jan. 22
In sculpture and video, Berlin-based Greek artist Yorgos Sapountzis takes on monuments and public space. In his videos, the artist directs actors to converge on figurative sculptural monuments with brightly colored swaths of aluminum and fabric that recall banners or tents; these are on view in the gallery. There couldn’t be more timely metaphors for some of the ideas engaged by the Occupy Wall Street protests.

Jayson Keeling at Third Streaming, through Feb. 25
The photos and videos in Jayson Keeling’s debut mash up high and low with unsettling results. The show’s title is lifted from a Bow Wow Wow album, whose cover featured a tableau vivant of Luncheon on the Grass, while a video titled The Great Masturbator nods to Salvador Dalí. Standout images include two photos, one of a sexy, scantily clad young Latin man reading about Andy Warhol, and a black man in tighty-whitey underwear with a pistol in his mouth.

Mel Bochner at Peter Freeman, through Jan. 14
Aside from a selection of historical drawings, the works in Mel Bochner’s latest show are technically new, though they’re all based, in one way or another, on projects or concepts the artist has been mulling over for decades. One series revisits an index card from the late ’60s on which Bocher quoted Encyclopedia Brittanica (“photography cannot record abstract ideas”); here, he’s photographed that card, and printed the image using six 19th-century techniques.

Paul Sharits at Greene Naftali, through Jan. 14
Ensconced in darkened galleries are 3rd Degree and Apparent Motion, two of the late artist’s experimental films, the former incorporating three whirring projectors that juxtapose frames showing a flickering match and rephotographed melted film. Sharits’s colorful scores, drawings and strips of film sandwiched between Plexiglas round out the show.