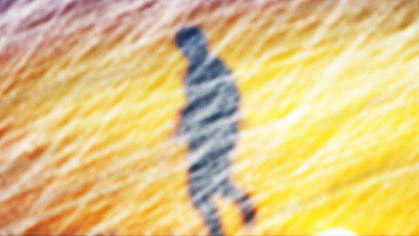 This week we check out William Stone’s portraits and landscapes cobbled together from cut-up thrift store paintings; Leo Villareal’s twinkling, floor-to-ceiling light installation; and Constructivist posters advertising Russian films from the ‘20s and ‘30s. See all ten picks below.

Georg Baselitz at Michael Werner, through June 18
Georg Baselitz’s fleshy, neo-expressionist paintings and related works on paper from the early ‘60s are both sexy and grotesque. In one, three nude, bald figures bend over in a smeary landscape; another, featuring a single bent-over figure and a pair of limbs, is titled Sex with Dumplings.

Paul Sietsema at Matthew Marks, through July 1
The 14 works on paper in this show look like various types of reproductions: silkscreens, photograms, photographic collages, etc. But close inspection reveals remarkably detailed drawings; one is a perfect copy of newspaper pages topped with a trompe l’oeil paint-covered notebook and paint stirrer.

Adam Shechter at Eleven Rivington, through July 1
Inspired by a science-fiction novel, this 6-minute video installation combines hand-drawn animations and found footage to muse on humankind in the far future. Geometric abstraction and lush land-, sea- and skyscapes-including a terrific image of a jet-propelled flying city-all float by at just the right slow pace for the dreamy imagery.

Subodh Gupta at Hauser & Wirth, through June 18
Subodh Gupta’s show, “A glass of water,” is named after the most subtle piece in this diverse, tricky exhibition: a steel cup on a tall wooden table, filled to the brim with water. Other mundane objects-bread dough, buttons, a tape measure-make their way into Gupta’s large-scale paintings and sculptures.

William Stone at James Fuentes, through June 12
Thrift-store portraits and landscapes are cut up, collaged and re-worked. It’s not a new trick, but Stone performs it well; note the flashing red bulb inset into one country landscape, like the brake light of a car. Be sure to sit in the chairs, which incorporate frames-making you the sitter of a hypothetical portrait.

Leo Villareal at Gering & López, through June 25
In the gallery’s darkened space, this new light-show spectacle is as uplifting as it is mesmerizing. Villareal used software code to program the 20,000 LEDs suspended in a towering cylindrical form. Don’t miss the two earlier pieces in the back.

Sean Dack at Fitzroy Gallery, through June 25
This 26-channel audio installation remixes every commercially available version of Erik Satie’s Gymnopedie No. 1 (1888) into one 72-minute ambient composition. It provides a transporting environment for those trapped in a hot, chaotic city.

Revolutionary Film Posters at Tony Shafrazi, through July 30
The 95 Russian film posters, dating from 1920 to ’33, highlight the bold, graphic style of many unknown Constructivist designers (plus artists like Alexander Rodchenko and Alexander Naumov). The show is accompanied by clips from some of the films, as well as a model of Vladimir Tatlin’s Monument to the Third International.

Fernando Bryce at Alexander and Bonin, through June 18
The two new bodies of work by this Peruvian artist are both made up of ink-on-paper reproductions of World War II-era newspapers. One series pairs wartime headlines from a Lima paper with ads for Hollywood movies. The other mixes covers from a German-language Jewish journal with one published by Joseph Goebbels.

Rebecca Chamberlain at Dodge, through June 19
Rebecca Chamberlain uses photos of modernist interiors, often cropped to show off a particularly elegant arched ceiling or staircase, as the source material for her multi-panel paintings on vintage architecture paper.