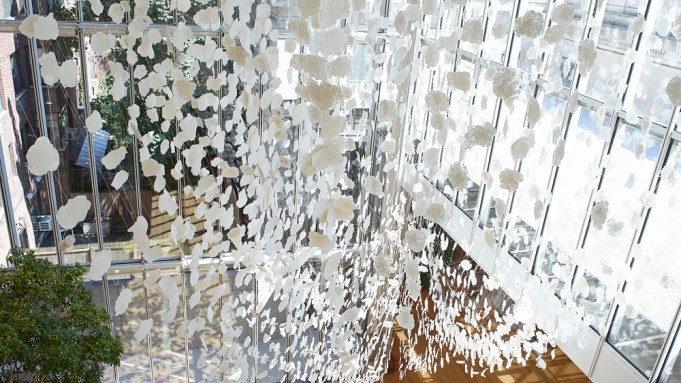 The petal-like sheets of paper seem to stream through the Gilbert Court of New York’s Morgan Library & Museum. They appear to linger at the south side of the glass-enclosed atrium for a moment before drifting upwards, peaking just inches from the Court’s 50-foot ceiling. As they climb, the clusters of papers grow less dense, giving the impression of clouds about to disperse. Those sheets form Monika Grzymala’sVolumen (through Nov. 3), the fourth installment in the Morgan’s summer sculpture series. The Polish-born, Berlin-based artist, born in 1970, specializes in site-specific installation. She fashioned Volumen from 5,000 sheets of mulberry paper, threaded together by strands of bookbinding yarn and secured to the court’s ceiling with nearly imperceptible monofilament. Though the installation was completed in eight days, the artist told A.i.A. in an interview that the sculpture was months in the making.

“Oh, the mulberry! It creates paper that is so very white; it is the silk of all papers,” said Grzymala. She then explained how her turn to handmade paper began with a refusal. In search of material for an installation, Grzymala found that no vendor in Berlin was willing to sell products without a watermark. Fortunately, she discovered a Berlin papermaker willing to teach her the trade. She described the act of papermaking as nothing less than a spiritual experience. She explained, “It is very complicated. If you are not clear and not focused, the paper will not be good…like a process of life.” It was this identification of mystical properties in the process that brought Grzymala into contact with the Euraba, Australian Aboriginal papermakers with whom Grzymala collaborated for her large-scale installation The River, at the 2012 Sydney Biennale.

While the sheets used in The River were meant to symbolize “faces or maybe tears,” in Volumen the medium is married to both practicality and imagination. When asked about her inspiration for the project, the artist said, “It started with drawing. I wondered, What is the medium? When nothing remains, we can go back to paper and pencil and always become artists again.”

Volumen‘s association with the Morgan is stronger than the obvious connection between the library and paper. Though it uses 3,000 blank sheets of Grzymala’s own paper, the sculpture also includes 2,000 sheets reproducing manuscripts from the Morgan’s collection. Guided by aesthetic affinity, Grzymala scoured the holdings and photocopied manuscripts from 15 sources, including Jane Austen, Galileo, George Gershwin and Ludwig van Beethoven.

Though photocopied pages of manuscripts form the lowest point of Volumen, the written word gradually gives way to luminous blank sheets as the sculpture stretches toward the ceiling. Grzymala has called Volumen a gesture of “physical thinking.” And while the piece was installed from the ceiling down, Grzymala is emphatic when asked if the sculpture has a direction: “Absolutely. Towards the sky,” she says, “definitely up.” As the sculpture extends upward, it widens and the strings of paper grow slender, as if they were the paper version of a grand yet ephemeral impulse. It seems fitting that Volumen be just as fragile, changing with daily light.