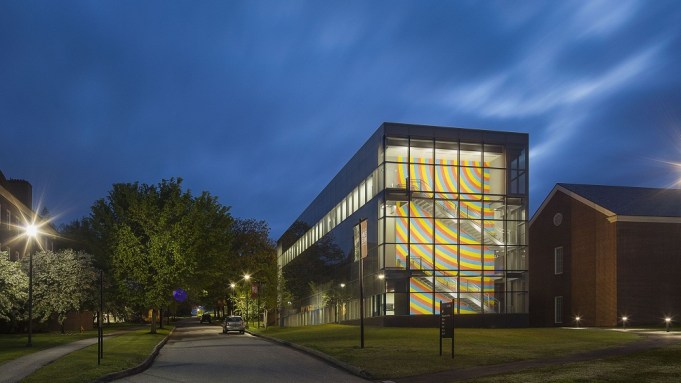 As Colby College, in Waterville, Me., turns 200 this year, the Colby Museum of Art also celebrates becoming the largest museum in the state and unveils a major gift of American art. Opening July 13, the new 26,000-square-foot Alfond-Lunder Family Pavilion unifies the museum’s existing three wings with a glass lobby and provides additional gallery space for the largest gift in the museum’s history—more than 500 works of 19th-, 20th- and 21st-century art, valued at over $100 million, given by Peter and Paula Lunder. The former president of the Dexter Shoe Company, Peter Lunder is a Colby graduate; the Harold Alfond Foundation, named for Peter’s uncle, gave $5 million toward the project.

“It’s a collection that was put together over several decades by two people who were really taken with American art but then began more recently to think about what a collection like this would mean to a place like Colby,” said Sharon Corwin, the museum’s director, during a recent walk-through of the new building. The Lunders have lived in Waterville since 1959. They promised the collection, with works by artists like Whistler, Sargent, Cassatt, Homer, Hopper, Calder, O’Keeffe, Nevelson, Judd and Chamberlain, in 2007, and since then have continued to acquire contemporary pieces, including works by Terry Winters, Fred Wilson and Maya Lin. “They’ve added to the collection with an eye toward what can make a difference in an academic context, for a museum that has visitors from many different disciplines,” Corwin said.

The $15-million glass pavilion, designed by the Los Angeles-based architect Frederick Fisher, is the college’s response to the Lunders’ gift, which brings the museum’s permanent collection to over 8,000 works. On the college campus, with its Georgian-style red brick architecture, the glass rectangle stands out as the most modern building, one that, in the daylight, almost dematerializes with reflections of its surrounding environment, and, at night, glows with light from within. “We talked to the architect about wanting a piece of architecture that read ‘art museum,’ that read ‘creativity happens here,’ that read ‘this is a place about seeing and looking,'” said Corwin, noting that Fisher had previously designed the museum’s 1999 Lunder Wing, a traditional red-brick addition, and already had an understanding of the museum’s labyrinthine structure, which had grown in five stages since its founding in 1959. “This notion of the museum as a lantern was formative in Fred’s thinking,” Corwin said.

Affixed to one face of the glass curtain wall near the main entrance is a recently acquired text piece, The Museum Is a School (2011), by Luis Camnitzer. It reads: “The museum is a school: the artist learns to communicate, the public makes connections.” Standing in front of the work, Corwin said, “We love how that encapsulates our mission.” Visible through the opposite facade, from the campus’s main road, is a three-story abstract wall drawing in primary colors by Sol LeWitt, which is illuminated at night almost like a billboard. The lobby, which now knits together the various wings in a more coherent way, will be used for lectures, performances and screenings as well as exhibition space; it was installed for the opening with works from the museum’s collection including pieces by Dan Flavin, Sherrie Levine, Gary Hume and Jenny Holzer. The new pavilion also brings classrooms, art and photography studios and faculty offices within the footprint of the museum; they will be visible through the glass facade. “We wanted to be kind of like creatures in the zoo, where you could peer in and see the work that happens at the museum and that goes into making art,” says Corwin.

“The Lunder Collection: A Gift of Art to Colby College” is the main inaugural exhibition (through June 8, 2014), with 280 works installed throughout the new pavilion and the Lunder Wing. “The collection is equally strong in 19th-century American and contemporary,” says Corwin. “The Lunders came late to contemporary art, but they bought very smartly.” Throughout the galleries, Corwin has teased out themes within the sprawling collection, including the idea of water or reflection in the contemporary gallery. There, Pin River-Kissimmee (2008), Maya Lin’s rendering of a river in Florida, made of straight pins hammered into the wall, is juxtaposed with painted water scenes including Alex Katz’s Canoe (1974), Fairfield Porter’s North Point No. 1 (1972) and Richard Estes’s Mt. Katahdin, Maine (2001). In another section, Corwin has grouped sculptures by Oldenburg, Judd and Chamberlain, all done in 1977. “They provide a great teaching moment, where you might talk about Pop art and Minimalism and Abstract Expressionism,” she said.

The 19th-century selections, installed in the Lunder Wing, showcase the collection’s particular strengths in Whistler, Cassatt and Homer. The Lunders amassed well over 200 works by Whistler, now making Colby, along with the Smithsonian’s Freer and Sackler and the University of Glasgow, home to one of the world’s largest collections of the artist’s work. The institutions collaborate as part of the Lunder Consortium for Whistler Studies.

Corwin has dedicated one gallery to more than 25 works on paper by Whistler and sprinkled his works in other thematic rooms, including a gallery labeled “Views from Abroad,” with exotic scenes by Sargent, Thomas Moran, Maurice Prendergast and John La Farge. Homer, who moved his studio in 1883 to Prouts Neck, Me., where he painted the sea for the last three decades of his life, is included in a gallery called “Working the Waters” with naval scenes by Sanford Robinson Gifford, Rockwell Kent, William Merritt Chase and Childe Hassam. “Art of the American West” spotlights the Lunders’ deep interest in artists who mythologized Native Americans and the southwestern landscape, including Maynard Dixon, William Robinson Leigh and Victor Higgins.

The Lunder gift, which Colby president William Adams described in a press briefing as transforming the museum from an underappreciated gem to one of the top American art collections, joins a collection already very strong in American art. Earlier significant gifts shaping the museum have included a large cache of works by John Marin donated by his family in 1973, 20 years after his death. The pioneering American modernist had summered in Maine and in 1933 bought a home in South Addison, where he lived for the last 20 years of his life. “A Thing Alive: Modern Views from the Marin Collection” (through Sept. 29) shows highlights from these holdings.

The museum also has more than 800 works by Alex Katz, another artist with strong Maine ties. Katz first discovered plein air painting in 1949, when he attended the Skowhegan School of Painting and Sculpture, near Colby. Since 1954, he has spent summers working in Maine. After his second exhibition at Colby in 1992, Katz promised some 400 works, for which the museum built a dedicated wing in 1996. He has since doubled that gift. The artist, who is also on the museum’s board, has additionally contributed more than 50 works by other artists through the Alex Katz Foundation. “Nowhere But Here: Art from the Alex Katz Foundation” (through Jan. 5, 2014) includes many of his handpicked selections for the museum, from works by Arthur Dove and Marsden Hartley to contemporary pieces by Elizabeth Murray, Dana Schutz and Jason Fox.

With the expansion has come the hiring of additional staff, including a curator to oversee the Katz collection and an American art specialist. Corwin said, “We’re excited about being one of the great undergraduate institutions for the study of American art and art history.”

I Tested and Loved This Premium Smart Scale, and It’s Just $66 for Black Friday Weekend