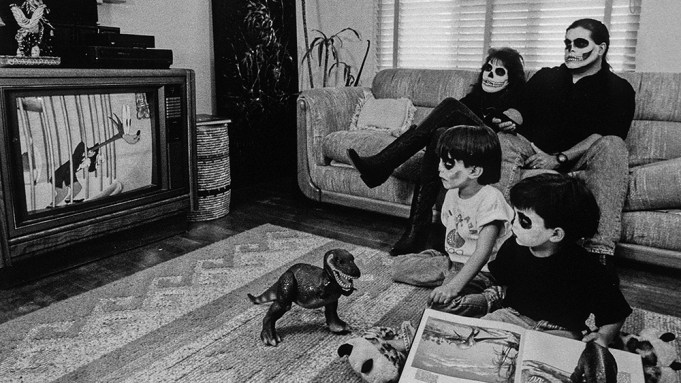 As a young girl, photographer and filmmaker Laura Aguilar would accompany her Aunt Inez, who was starting to lose her vision, on daily strolls through the rolling landscape of the then-rural San Gabriel Valley. Aguilar took time to describe their surrounding environment: the quality of the luminous California light, and the geological formations of the surrounding mountains. She would delight in composing verbal portraits of the people they noticed.

Acute depictions of the San Gabriel Valley and probing observations of the human body would become central to Aguilar’s artistic practice. Over one hundred of her works are now on display in “Laura Aguilar: Show and Tell,” an exhibition at the Vincent Price Art Museum organized in conjunction with Pacific Standard Time: LA/LA, the Getty Foundation’s curatorial initiative to promote Latino and Latin American art at venues throughout Southern California. The retrospective, which runs through February 10, is presented at the museum’s building on the grounds of the East Los Angeles College (ELAC), where Aguilar took photography courses in the late 1970s. Though her work has attracted much scholarly interest, particularly for its intersectional feminism, her last solo museum show was organized in 2008 by the Museo Alameda in San Antonio, which has since shuttered.

“Show and Tell,” which spans two floors of the museum, is arranged in a loosely chronological order. Much of Aguilar’s work is serial, and the curators have taken care to present themed groupings in a manner that reveals their continuities. The upper floor features mature photographic projects from the 1990s and 2000s, such as “Grounded” (2006­–7), her acclaimed series of self-portraits shot in the Mojave Desert, while artworks and ephemera from Aguilar’s college years and early career, including a small selection of family snapshots, are exhibited on the lower level, with a few short films she made in the mid-1990s.

A comprehensive exhibition catalogue details Aguilar’s biography. Her working-class parents merely hoped, like many others, to assimilate into the dominant culture of the United States. Aguilar, however, was encouraged to investigate the crisscrossing nodes of her own identity by mentors she met at ELAC, such as the artist Judy Miranda and Sybil Venegas, a professor of Chicano studies who curated “Show and Tell.”

In the 1980s, Aguilar began documenting the energetic East LA art and music communities, which elevated Chicano and Mexican cultural traditions in the wake of the Civil Rights Movement. In these photographs, which commemorate lively local personalities, she plays with the conventions of family portraiture to convey the closeness of their circle. Performer Harry Gamboa Jr. and artist Diane Gamboa, for example, pose with their young son in front of a coffin that is set against a white sheet: a typical studio set-up with a playfully macabre twist. Artists such as Barbara Carrasco and Yreina D. Cervántez and the punk band Los Illegals are featured in more classical compositions.

As part of a series on East LA’s yearly Day of the Dead festivities, Aguilar shot portraits of local personalities such as photographer Ricardo Valverde and the Gamboas in attendant calavera makeup. This double-edged motif—a symbol of Chicano culture, but also a mask—would remain important in her work. A famous photo, At Home with the Nortes (1990), pictures a family in calavera makeup watching television in a suburban living room. On the one hand, it lays bare the typical trappings of the deracinated middle-class home. On the other, by introducing a culturally specific signifier, it subverts notions of suburban life as an inherently white experience. These modestly sized portraits are hung on the lower floor in small groupings that would not be out of place in a family home.

The next floor shows Aguilar reckoning with the multiplicities of her own identity as she became active in LA’s queer community. In 1986, for a mental health conference held in LA, she was commissioned to compile a body of work that challenged stereotypes about queerness. The resultant photo-and-text series, “Latina Lesbians,” (1986­–90), was a suite of portraits accompanied by a text, written by the sitter, about her identity. The portraits are displayed in a long line on one wall. Carla, for example, a woman with short hair, sits cross-legged in an armchair, confident in her difference. Clutching an acoustic guitar, Lydia stares straight into the camera with steely determination. The desires of these women are both specific and universal. Aguilar’s focus on individual identity formation works against the tendency to essentialize sexual inclination.

In a self-portrait for the series (1998), Aguilar wears casual clothing and a cowboy hat. She’s laughing beside a pinned-up poster of Frida Kahlo. A stuffed animal hangs from the ceiling, and small toys and knick-knacks adorn the floor and bookcase. The photograph is bordered by images of cards from a lotería deck, a game of chance. Her text beside the image reads: “I know some people see me as very childlike, naive. Maybe so. I am. But I will be damned if I let this part of me die!”

This bordering technique also appears in “How Mexican Is Mexican” (1990), a series of triptychs Aguilar developed in the same period. The three triptychs, each featuring a self-portrait flanked by two photographs of other Mexican American women, are framed by fanciful marginalia; designs featuring feathers, birds, and celestial creatures border their faces. As in “Latina Lesbians,” the sitters contribute handwritten text. The layout functions as a gesture of solidarity: Aguilar directly aligns herself with her sitters via their common sources of pride and anxiety. This makes for a poignant contrast with Three Eagles Flying (1990), perhaps her most recognizable work, in which a Mexican flag is draped over Aguilar’s head and secured around her neck with a thick, heavy rope that diagonally crosses her bare chest and binds her wrists. An American flag is wrapped around her waist and further secured with the length of rope. Images of two more flags flying, American and Mexican, complete the triptych, sandwiching Aguilar between signs of identity that cannot fully define or contain her.

A different, more spiritual dimension of Aguilar’s practice emerges in her iconic “Nature Self-Portrait” series (1996). Influenced by the work of Judy Dater, especially her book Women and Other Visions (1975), the series comprises portraits taken in the Gila Mountains, the Mojave Desert, and at the El Malpais National Monument in New Mexico. Like Dater, Aguilar uses a velvety black-and-white palette and chiaroscuro lighting that imbues her images with a somber radiance.

At times, Aguilar lounges on the dirt, propped up against rocks and branches, as if in communion with the landscape. In more active shots, she splays her arms energetically, facing the omnipresent sun and mimicking the gnarled desert trees among which she stands. In the “Stillness” and “Motion” series (both 1999), Aguilar introduces female figures who dance and tread delicately through the landscape. Even when surrounded by these nymphs, she can seem solitary. In the last decade Aguilar, has shifted to color photography with “Grounded” (2006–7), a series of self-portraits also shot in the desert.

“Show and Tell” also includes four films, originally shot on VHS and transferred to digital video format, on alternating loop, which symbolize what it means to teeter at the margins. In The Knife (1995), Aguilar zooms in on a pair of hands. A knife caresses the palm across dips and creases, applying pressure to the soft corners of flesh—but not enough for the skin to break and bleed. A dull, monotonous voice in the background professes: “I know that I want to die . . . I’ve been standing at the edge for so long.” Aguilar, who has suffered from depression since childhood, approaches her condition with a forthright darkness. In “Don’t Tell Her Art Can’t Hurt” (1993), a multi-part photo-and-text series that hangs adjacent to the film projection, Aguilar photographs herself, alternately clothed and naked, with a revolver in her mouth. A response to the LA Uprising of 1992, Don’t Tell Her Art Can’t Hurt expounded upon the connections between cultural identity and depression.

Visiting “Show and Tell,” I initially gravitated toward the soft murmurs of Untouched Landscape (2007) a short filmic self-portrait. In it, Aguilar stands squarely before the camera, her body stark naked under the desert sun. She speaks without pretense, clutching her hands together, about the necessity of “being touched”—a sensation she likens to the kiss of sunlight. Brilliant rays stream behind her, illuminating the mass of her body, highlighting her tan lines and stretch marks. In a dreamy, rambling tone, she reflects on the lack of sunlight in her life—the lack of tenderness—that compelled her to cultivate it through images of herself and others. Though Aguilar is alone in the desert, she has found peace and intimacy there.

The Best Scientific Calculators To Buy for School and Work