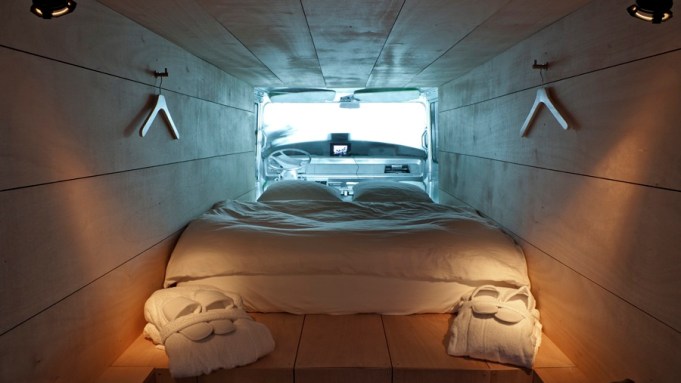 Combining art and hospitality, THE PROPOSAL is both a functioning bed-and-breakfast and a small Zurich gallery. Part of its quarters is a 1977 Peugout j7 chrome-painted van with a fully furnished bedroom.

Founded by childhood friends, 29-year-olds Lenny Staples and Jeremie Maret, along with 39-year-old graphic designer Christian Weber, this “residence in art,” as they call it, which opened in November, is already on to its third show and has a 75% occupancy rate for the upcoming month.

Weber also runs Plasma Design and the creative web-publishing platform ALLYOU.net. Staples previously worked in the hospitality industry in New York, and Maret maintains his own art studio nearby in Zurich.  Now they also manage the day-to-day operations of the gallery/bed and breakfast.

Art review or hotel review? THE PROPOSAL begs for both. Traveling through Switzerland looking for art, I found the place on AirBnB.com and booked two nights. (It is also advertised on unusualhotelsoftheworld.com.) For two guests, each night runs CHF 150 (around $167).

The small two-story gallery space is tucked into the back of a residential courtyard in Zurich’s up-and-coming Wiedikon neighborhood. Formerly Maret’s home-studio, the first floor serves as the main exhibition hall, the basement for opening parties and a loft room as one of the two guest rooms. The other is in the van parked outside, four feet from the gallery door, in the courtyard.  The only bathroom is inside the gallery, making these short four feet an unusually important distance during a Swiss winter.  Our first night was in the gallery bedroom, the second in the van.

“In all forms of cultural production, you need a proposal to confront an idea with reality,” Maret told A.i.A.

The gallery will present a total of six exhibitions in its first season. Now, two weeks into its third exhibition, the gallery presents “THE PROPOSAL No. 3/the human print,” the work of Zurich-based fashion designer Stefanie Biggel and graphic designer Natalja Romine. The show features a small collection of seven sheer, hand-sewn garments with an allover pattern of laser-printed freckles. The exhibition also includes the paper placemats on which we were served breakfast each morning, made by the same artists, in the same freckled pattern as the garments.

Looking to April, and its fourth proposal, the trio have invited an artist to stay in residence for one week and present a body of work made on location.