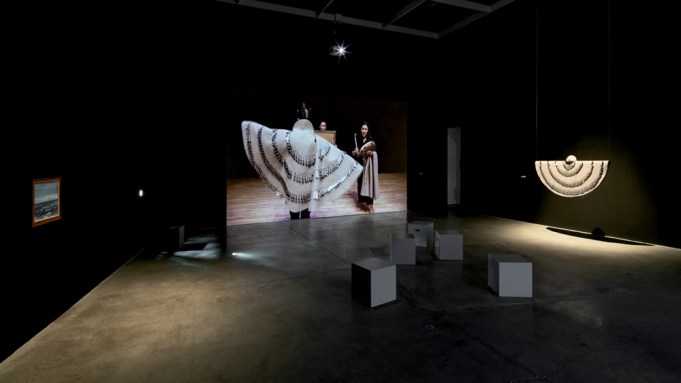 MARIA HUPFIELD is a maker, a mover, a connector, an Anishinaabe-kwe and a member of Wasauksing First Nation. She now lives in Brooklyn, on traditional Lenape territory. Like the artist herself, Hupfield’s work is never static. Her performances, sculptures, and installations reference different spans and scales of time. The projects specifically reflect her resistance to the Western tendency to essentialize Native artists and treat them as interchangeable producers of exotic cultural experiences. Hupfield intervenes in white art institutions by inserting Indigenous knowledge structures into their practices. She values expansive exchange over isolation, and inclusion over hierarchy.

#Callresponse is a multifaceted project that Hupfield co-organized with writer-curator Tarah Hogue and artist-curator Tania Willard. It took place over the course of 2016 at institutions across Canada, while a website, podcast, and hashtag provided broader audience access. Five artists from diverse geographic regions were invited to contribute and to choose other artists, who then added responses of their own. The approach of connecting and networking worked against colonial and patriarchal strategies of separation and competition. Hupfield’s contribution, Post Performance/Conversation Action (2016-), consists of dialogues with First Nations women. The artist’s talk, a convention tediously familiar to Western art audiences, thus becomes a platform for Indigenous knowledge production and exchange. Post Performance/ Conversation Action honors the perspectives and voices of Hupfield and her guests in a balanced relationship, rather than positioning one as expert, as is typical in artist interviews. The work creates an equitable space for conversation and presentation that Indigenous people are not always afforded.

The means Hupfield uses to accomplish this objective vary. In advance of some performances, Hupfield has asked two local Indigenous women to assist her in the roles of translator and transcriber, drawing on her knowledge of the local community to select people suited to the task. During the event, audience members are invited to ask questions, but are told that to do so they must silently get the translator’s attention and pose their questions quietly while the conversation continues between Hupfield and her guest. When the speakers pause, the translator synthesizes the question and repeats it for the audience to hear and for Hupfield and her guest to address. This process both prevents the audience members from hijacking the question-and-answer period and ensures that only the voices of Indigenous women are heard publicly. The transcriber’s role is to record the event, typing all the questions and none of the answers. This text is projected onto a screen for the audience to see and is kept as documentation of the event.

Other aspects of the work can vary depending on the guest. At Galerie de l’UQAM in Montreal, Hupfield invited documentary filmmaker Alanis Obomsawin to be her guest. Hupfield wanted to visually demonstrate Obomsawin’s extraordinary body of work on complex histories of Indigenous and non-Indigenous people. To do this she unrolled fifty pieces of bright pink tape, representing the number of years Obomsawin has worked with the National Film Board of Canada, counting in French, English, and Anishinaabe, three of the many languages Obomsawin has used in her documentaries.

The One Who Keeps on Giving (2017) is a project commissioned by the Power Plant Contemporary Art Gallery in Toronto. The title is an English translation of the Anishinaabe name of Hupfield’s late mother. An identically named solo exhibition, held at the nonprofit at the beginning of this year, featured video documentation of two related performances, projected on opposite walls in an alternating loop. The first took place in Hupfield’s home territory, Parry Sound, Ontario, during the Second Annual Gchi Dewin Indigenous Storytellers Festival. The second version was shot at the Power Plant itself.

Feeling the cold wind off the water and seeing the sparkling waves through the Power Plant’s large windows, visitors immediately sensed their proximity to the vast body of water known as Lake Ontario. In precolonial times, the Great Lakes provided a complex network of transportation routes that enabled the diverse Indigenous nations living around them to form political and cultural alliances. The water that passes the shores of Parry Sound in the Wasauksing First Nation reserve flows into Lake Ontario and past the Power Plant. By presenting her performance once in Parry Sound and once in Toronto, Hupfield emphasized the movement of water and people, decentering the city and the gallery.

The focus of the work is a seascape of Georgian Bay that Hupfield’s mother painted and signed with her anglicized name, Peggy Miller. A trained artist, Miller often painted and drew as her children were growing up. Hupfield invited each of her siblings to contribute to the piece using their bodies, movements, and materials. She begins each performance by unwrapping the cover of industrial felt in which the painting is kept. Her movements and facial expression suggest a state of memory and reflection. Johna, Hupfield’s eldest sister, contributes hand-drumming and vocals. Her younger brother John’s grass dance provides the most choreographed segment of the performance; the bells on his regalia create an auditory trace of his actions. Hupfield’s sister-in-law Deanne, who competes in the fancy shawl dance at powwows, wears Hupfield’s Jingle Spiral (2015), a shawl-like sculpture made from a seventy-inch length of gray felt. At the quieter moments in the performance, the bells sewn in a spiral pattern on the felt ring out clearly. A keen eye might notice that Deanne is pregnant, adding a connection not only to past and present but also to future generations. The siblings and the materials they wear have a distinctive role, representing the creative expertise of their communities in fields that are not typically presented alongside each other. Those familiar with the history and arts of the Anishinaabe will recognize the hand drum, grass dance, and jingles in their cultural context. Hupfield’s performance demonstrates the value of familial and community relationships, presenting them as an alternative to the concept of rugged individualism valued in the art world.

The sites where the performances took place provide subtle but highly significant differences. In the Parry Sound version, the initial shot frames the performance on the festival stage. Then a second camera shows the audience watching. The viewer gradually becomes aware of the setting; the ending is marked by the sound of the audience’s applause. The version filmed in Toronto begins with Hupfield holding the painting up to the camera. The Georgian Bay seascape fills the frame, then recedes to reveal the gallery’s white walls and concrete floor. There is no audience present. The majority of the viewers of this work will experience both performances through the video documentation and might interpret the work as performance for the camera. But Hupfield does not define it that way. The choice to perform in the public space of the gallery without an audience and at the storyteller’s festival with a geographically limited audience indicates that we cannot have access to all parts of artistic production. Some performances are for a particular audience or place. They are not for everyone.

IN 2012 HUPFIELD participated in the artist residency program at the Museum of Arts and Design, New York. This year, she has been invited to return for a group exhibition called “Studio Views: Craft in the Expanded Field.” Over the course of eight weeks, Hupfield will work from the third-floor gallery at MAD to produce Sacagawea Mail Coif, which entails a performance, an installation, and a workshop/seminar. Sacagawea was a Lemhi Shoshone woman who helped guide the Lewis and Clark expedition from North Dakota to the Pacific Ocean and back, carrying her infant son along the way. Among the many memorials honoring Sacagawea is the one-dollar coin issued in 2000. A number of these coins will be used for the work’s titular coif, or mail helmet.

The use of images of Native women in American culture is fraught with stereotypes and manipulation. The historical and contemporary positioning of Native women as oversexualized and submissive can be summed up by the prevalence of “sexy squaw” costumes worn on Halloween. The story of Sacagawea offers a much more positive view, emphasizing her strength, knowledge, and courage. However, even this more favorable take falls into the trap of romanticizing and essentializing-a symbolic positioning that primes the American public to accept physical and economic exploitation of Indigenous people.

To be pictured on a US coin is an honor. This “honor” can also be interpreted as a disgrace, since it uses Sacagawea’s image to commemorate US colonialism and the resulting economic power over Indigenous people. Sacagawea is venerated in US history because she assisted in a colonial mission. But Indigenous women who hinder colonial or government projects are not viewed favorably by the state. Hupfield’s new work draws our attention to the interplay between economic power and symbolic power through the use of currency as material. The story of Sacagawea circulates through classrooms and popular culture, much as the coin that carries her face was meant to move through the US economy. By wearing a head covering made from images of Sacagawea, Hupfield contrasts a picture of Native people in the popular imagination to her own physical presence.

Like Post Performance/Conversation Action and The One Who Keeps on Giving, Sacagawea Mail Coif rejects Western knowledge systems by telling an Indigenous story with Indigenous ethics, methodologies, and structures. In this case, producing the work in a gallery at MAD allows literal conversation with museum visitors and forestalls any imposition by curators in the production of the work. Hupfield’s focus on a metaphorical conversation with a historical figure expands from the familial and communal scope of the earlier work to discussions of symbolism on a national scale.

This $3.5 Million Architectural Masterpiece in LA Allows You to Separate Work and Play

Retro Toys Are Trending With Holiday Shoppers, and 90s Classics Like Easy-Bake Oven & Lite-Brite Are On Sale