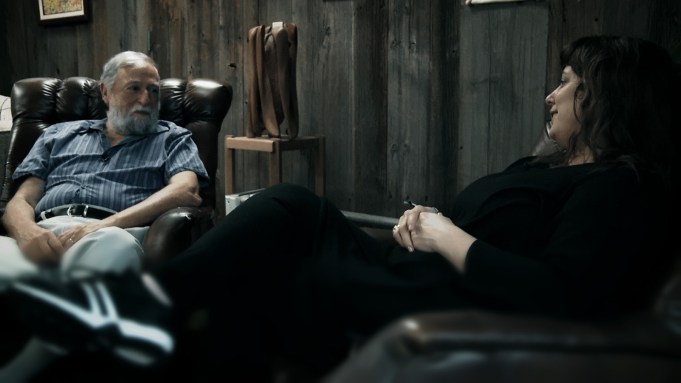 What happens when a performance artist struggling against state censorship goes to therapy? In her new film Tania Libre, Lynn Hershman Leeson lets us eavesdrop on Tania Bruguera’s session with Dr. Frank Ochberg, a leading psychiatrist and PTSD expert. Their conversation is slow in tempo as it unfolds over the hour-long film, but it raises provocative questions about abusive familial structures and the ways that traumatic experiences of betrayal can play out on a larger political scale. Static camera angles of Bruguera and Ochberg relaxing on easy chairs have a drowsy visual impact as their discussion rambles between anecdotes and responses. But Bruguera’s stories are highly useful for interpreting her work, and although the mood of Tania Libre is sedate, its ideas are keen.

Since the 1980s, Bruguera has found creative ways to test the limits and contradictions of various power structures through performances and collaborative projects. Her practice is impossible to pin down; sometimes it involves horse-mounted police officers herding visitors around a museum, or Bruguera reading aloud the entirety of Hannah Arendt’s Origins of Totalitarianism. In one of her most well-known pieces, Tatlin’s Whisper #6 (Havana Version), presented at the 2009 Havana Biennial, members of the public were invited to speak freely for one minute each at a podium. Footage of the performance is included in Tania Libre. In the doctor’s office, Bruguera fondly reminisces on the sentiment from one participant in Tatlin’s Whisper, who expressed his hope that “one day freedom of expression in Cuba will not be a performance.”

Two weeks after President Obama announced the end of the American embargo against Cuba in 2014, Bruguera attempted to restage the performance again in Havana with the title #YoTambienExijo, but was arrested and detained by the Cuban police before she could begin. Hershman Leeson heard Bruguera was in jail and decided to produce a film about her. “I simply wanted to help,” Hershman Leeson explained to me. “As an artist I felt empathy for the censorship and repression of her confinement and imprisonment that generated from an attempt to do her work.” Hershman Leeson’s unusual film focuses less on the political impact of Bruguera’s provocative performances than on the relationship between the manipulative tactics of the Cuban government and the fraught psychic underpinnings of the artist’s decisions made throughout her practice.

As one of the art world’s most celebrated—and daring—artists, it’s moving to see Bruguera express doubt about the risks she has taken for her work. In her session with the doctor, she eloquently reflects on the emotional ramifications of constant struggles with authorities and even peers who seek to cast her as a criminal. Yet Bruguera’s resentment toward those who disparage her is coupled with empathic remorse for the pain that she has caused others.

When Bruguera and Ochberg discuss her time in jail, she laughs bitterly about her complicated attraction to her prison guard. Ochberg describes Stockholm Syndrome, explaining how victims of violence can be attracted to their abusers. The possibility of such a powerful—but scarring—bond at work in society at large may shed light on why citizens seem to willingly give up their rights under repressive regimes.

The familial metaphor of the state as an abusive caretaker is particularly apt when considering the Castros and the aftermath of their revolutionary idealism. As any good shrink would, Ochberg makes sure to ask about Bruguera’s relationship with her father, a former diplomat and minister to Fidel Castro. The topic first comes up when he asks about an early moment when Bruguera’s faith in justice was deeply shaken. She recalls working on a newspaper project in 1994, when her father “came to my house as a policeman, not as a father.” He turned her in to secret police.

Ochberg reflects on this incident as a moral wound connected to a deeper realization of injustice that has had complicated effects on Bruguera. In the aftermath of this betrayal, her father lost his status as an ambassador and was no longer allowed to travel outside of Cuba. The secret police have continued to interrogate and detain his daughter on and off, using creative tactics to censor her work to this day. As she told Art in America in 2015, “my work is about loopholes.” In the film she recalls, her countenance lighting up with mischievous joy, the attempt by government officials to drown out her reading of Hannah Arendt’s The Origins of Totalitarianism with jackhammers. During their lunch break, the workers listened in.

Footage of the therapy session comprises an overwhelming majority of the film, but there are also several intentionally discontinuous moments. Archival shots of Bruguera’s performance work are interspersed as short montages with upbeat music, and several mysterious voiceovers from Hershman Leeson ask brief yet cutting questions like “Do you see this whole event as a performance?” Bruguera grins.

The film is bookended by a voiceover cameo by Tilda Swinton, who declares that “art is a basic human right” while disembodied hands release doves against a black background. The text, which comes from Bruguera’s Manifesto on Artists’ Rights, must have resonated when Bruguera delivered it to the United Nations in 2012, but the speech’s effect is dulled here by theatrical cliché. Toward the end of the film, Hershman Leeson turns the camera to Bruguera’s current projects, like the Hannah Arendt Institute for Art and Activism in Havana, a space for international artists and activists to work on civic literacy projects. Unsurprisingly, the government subsequently launched a smear campaign against Bruguera, accusing her of working for the CIA. Yet Bruguera has refused to give up on Cuba despite the government’s many offers of a one-way ticket out of the country.

The film draws to a close with Bruguera announcing her 2018 Cuban presidential bid via a webcam in her house, undercutting any hubris with her primary message: “you should run, too.” Ultimately, Tania Libre is a portrait of an artist committed to seeking out her most honest and vulnerable self. Portraying Bruguera’s own messy internal process of constant questioning, the film concludes with the artist stepping solidly into the future, guilt and regrets in hand.

CURRENTLY ON VIEW Tania Libre screens at the Museum of Modern Art, New York, through May 24. Additional screenings will take place at Laemmle’s Royal Theater, Los Angeles, June 2–8; the SF DocFest at the Vogue Theater, San Francisco, June 9; and at the Art Gallery of Ontario, Toronto, June 14 and 16.