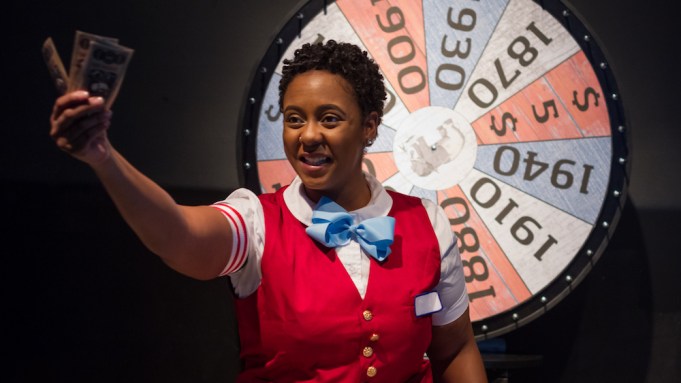 To say that racism in this country already has a national stage would be an understatement. We have a president who was reluctant to disavow endorsements from white supremacists like David Duke, and the proliferation of camera phones has made racially-motivated police brutality widely visible. The New York–based production company 3-Legged Dog has decided to dramatize such intolerance with 3/Fifths, a three-hour participatory play. Taking its name from the U.S. Constitution’s infamous Three-Fifths Compromise, which counted a black person as three-fifths of a whole person, 3LD’s production aims to criticize racism by putting it on insidiously joyous display. However, 3/Fifths quickly devolves into a grueling pageant of white supremacy and black suffering that rarely justifies its violent reveries. Conceived and written by James Scruggs, the performance recasts racial atrocities as spectacle, asking its audience to squirm with discomfort or otherwise be implicated in the hate crimes that are acted out.

The dystopic journey begins at the entrance of the 3LD Art & Technology Center in downtown New York, where the Blind Lady (Catherine Braxton) asks your race. (The only choices are black or white, which is then marked on your forehead with a grease pencil.) Through the rabbit hole you go, guided by a mirthful blonde docent (Lauren White) sporting a Confederate flag dress. Your destination is SupremacyLand, a theme park from a parallel universe of “alternative facts,” which features both the Atrocity Carnival and the Cabaret. On the way, the docent recounts a select history of white supremacy in the United States, from the Deep South to Hollywood to the White House. She applauds the Ku Klux Klan as the first social justice group, sharecropping as the first layaway program, and mass incarceration as a place for black people to be in their “natural habitat.” With cheery aplomb, she searches through the grimaced, stone-faced audience of New Yorkers for like-minded people, even asking a few spectators if they are members of the KKK. She finds none.

Directors Tamilla Woodard and Kareem Fahmy have created a troublesome theatrical successor to the Milgram Experiment, a 1961 psychological study that investigated our vast capacity to harm others at the behest of an authority figure. 3/Fifths excels at testing how many racial epithets, humiliations, and attacks a person can be complicit in—however staged—before intervening or walking out. At the Atrocity Carnival, for example, audience members are faced with a host of unsavory decisions. Should you attend the Noose Making Workshop or test your strength at the Aryan Hammer Toss Booth? Will you murder a virtual black “criminal” by violently shaking his police car in the Rough Ride video game or hose down civil rights activists at the capriciously named Wet and Wild Booth?

There are a few attractions that provide unexpected depth within the carnival’s unending procession of pain. The Reasons to Be Lynched Wheel of Fortune reminds players that white people have used extremely tenuous reasons to justify lynching right up to present day. Head to the Ask a Black Man Booth and witness one of the strongest performances of the show by actor Dean Acree. Choose your questions right, and he might whisper to you his secretive disdain for the Atrocity Carnival. There’s also the Flip Flop Race Ride, in which you listen to an audio recording made by a person of your opposite race while you receive a massage. The idea here is to find new ways of empathizing with others, imprinting participants with a muscle memory. If the carnival becomes too overwhelming, 3/Fifths provides tongue-in-cheek Fragility Nurses and an Anger Management Squad to quell the unease of white and black participants with either classical music or Bob Marley songs, respectively. They serve as a critique of our ability to confront racial hatred when it is rendered stridently visible.

Another standout of the carnival is Monica Howe as Lefty Liberal, who teaches the white participants how to avoid touchy racial conversations. This is one of the few attractions well-aimed at its New York audience. Through mindful breathing exercises and appropriated tai chi movements, she asks the audience to chant the frustratingly ignorant mantras of whiteness: “We are colorblind. All lives matter. I have several black friends.”

While Lefty Liberal instructs the white-identified participants, the black-identified audience members are ushered away by a sea goddess who chants, “The sea brought us here, the sea will bring us home.” Cue a reverse Middle Passage that awkwardly promotes African American resettlement through a slave ship journey that concludes in a room full of projected palm trees and ersatz West African dancing.

When the audience reunites downstairs at SupremacyLand’s Cabaret, one of the evening’s best moments begins. A film projected on the back wall of the space’s stage provides an abbreviated history lesson on the exploitation of black bodies onscreen. Two black men (played by Khiry Walkery and Dexter McKinney) wearing black face and streetwear supply live commentary. A form of modern minstrelsy, the pair satirically perform their “hoodness” while pointing out a series of black death tropes from famous films like Planet of the Apes, The Shining, and Jurassic Park. The short interlude suggests that the daily images of violence we consume in America have engendered a racist nation.

After the film ends, the fiendish procession resumes through SupremacyLand. What follows is a largely forgettable ninety-minute play, which chronicles a black carny at the Atrocity Carnival as he attempts to escape the amusement park. This section plays like a less subtle version of the movie Get Out (the boss of SupremacyLand has brainwashed his black “employees” to stay put with psychosomatic torture). But the grand finale offers the play’s most cynical hypothesis yet—that suicide is the only way to escape racist America.

A “Theatre of Cruelty” is defined by its ability to jolt viewers out of bourgeois complacency. Decades after founding the genre, playwright and theorist Antonin Artaud bemoaned, “With society and its public, there is no longer any other language than that of bombs, barricades, and all that follows.” Undoubtedly, Scruggs and his team share a parallel frustration with America’s greatest and longest-running shame: racism. It’s ironic then that 3/Fifths is so dramaturgically overloaded with themes of racial violence and hate that it loses its potency. The Atrocity Carnival’s attractions, for instance, may attempt to satirize microaggressions, misrepresentations, and stereotypes, but ultimately fall short without the proper space for critical reflection. Anger and violence are unwieldy tools, even for the Artaudian practitioner; a pugnacious approach is one thing, but nurturing productive conversation is another.

3/Fifths is a long, exhausting, and haunting white power trip that struggles to find its voice amid so many urgent ideas. Still, one of the play’s most compelling themes is witnessing. Watching your fellow audience members navigate accusations of racism, subdue nervous laughter, and grapple with their own biases is arguably the most interesting part of the show. But the ethics of how 3/Fifths teases out racial issues is questionable. What comes from cultivating alienation? Is violence the only answer to violence? Is America predestined for the dystopic future represented in SupremacyLand, or are we already there? Here, alienation breeds alienation and violence must meet violence. Scruggs and company give too much power to the oppressor, relentlessly walloping their audience with a sense that resistance to racism is futile. There’s no vision in that, no sign of revolution or salvation-only crushing defeat. If that’s the case, then at its end 3/Fifths creates audience members more complacent than when they started.

3/Fifths runs through May 28 at the 3LD Art + Technology Center in New York.