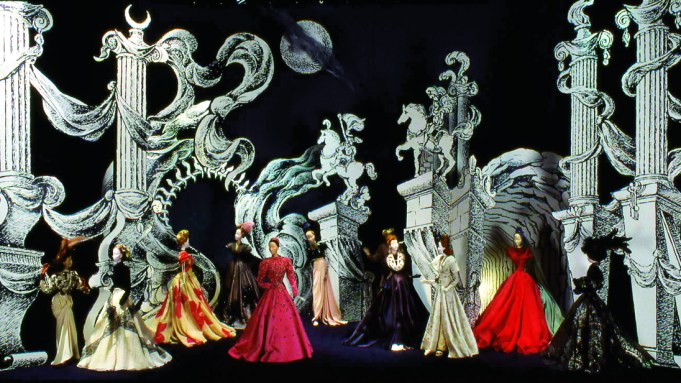 I’d never heard a sound like the name of this place, Klickitat County. The long drive along the Columbia River, from Portland into Washington State, past fissured rocks and forests blanketed in slashed fog, felt alien and I thought of the unanticipated moment in Chinese landscape scrolls when the protag-onist dissolves and the viewer is pulled into the picture, the act of reading shifting to wandering and being in the landscape of the story.

“Not sure if you’ll get this before you’re on the road, but just so you’re aware, the roads in the Gorge may be a bit slippery. Hopefully they’ll have melted by the time you’re driving. Also, you may want to stop and pick up something to eat for lunch. We don’t have any food at the museum in the off season and the nearest food is a couple miles down the road (a gas station),” Anna Berg, the collections manager of the Maryhill Museum of Art, cautioned in an e-mail I read while picking up my rental car.

On the Washington side, as I approached the museum, I stopped the car on the shoulder to smoke a cigarette and watched a train pass along the river, very slow and long, its metronomic bell softening into the distance.

The Maryhill Museum is housed in the former mansion of Samuel Hill, a Quaker businessman and idiosyncratic philanthropist. Perched on a cliff overlooking the Columbia River gorge, the Beaux Arts-style building is surrounded by miles of austere terrain. Hill had intended for the area to become a Quaker community, but Loïe Fuller, the radically innovative performance pioneer, convinced him to turn the mansion into a museum after practical considerations halted construction of the community in 1917. Fuller helped form the collection in its initial stages, providing artworks such as palm-size sculptures and erotic watercolors by Rodin, while Queen Marie of Romania, a friend of Hill’s, contributed pieces including gilt faux-folk furniture, her coronation gown and crown, and Eastern Orthodox icons. The Maryhill started amassing an important collection of chess sets in 1957. It also has artifacts by indigenous peoples of North America, and the panopticon-like 24-car garage of Hill’s building, transformed into galleries, displays items like baskets and waterproof sealskin shirts from Pacific Northwest tribes.

But what I had gone there to see is something else entirely.

A few years before my visit last January, I kept tripping over anecdotes—nested within “major” historical narratives—around a set of elaborate dioramas peopled by miniature mannequins in haute couture dresses from nearly every fashion house, produced in a spirit of defiance by designers, artists and artisans in postwar Paris, still shaken by the recent Nazi occupation. From the list of 60 participating designers, we still recognize: Lanvin, Balmain, Balenciaga, Schiaparelli, Nina Ricci, Lelong, Worth, Paquin, Rochas, Madame Grès. Coco Chanel, ensconced with her Nazi lover at the Ritz during the war, is noticeably absent from this collaboration.

The tableaux premiered at the Musée des Arts Décoratifs as the “Théâtre de la Mode” in March 1945 and were met with an overwhelming public response. The “Théâtre” then traveled Europe and America for two years, the tour raising money for the French war relief and promoting the crucial cultural and economic relevance of French fashion.

The mannequins and dioramas were presumed lost after this tour until their rediscovery in 1983. Thanks to a concatenation of blunders that concretized into history, and to the generosity of one Alma de Bretteville Spreckels, the mannequins had actually arrived safely on this bluff in 1952, at the Maryhill Museum.

Anna Berg and the off-season staff received me warmly, and curiously. I had come with the intention of filming the dioramas, but I wasn’t entirely sure what I would find. I was thinking about animation and Mallarmé. And for some time, I’d been interested in couture as sculpture, but also as a catalyst for a particular mode of collaboration across artistic categories, which is preserved here in diminutive form. Betty Long-Schleif, the recently retired collections manager, who had seen the “Théâtre de la Mode” come to life again through its rediscovery, restoration and second world tour (in the 1990s), graciously shared her expertise and intimate familiarity with each of the mannequins and garments. She recounted her meetings with some of the original contributors to this incongruous postwar monument, most of whom had been in their 20s when the “Théâtre de la Mode” was created. She explained that one of the mannequins’ faces had been mistakenly “made up” for the first tour, and pointed to traces of lipstick and eyeliner still visible beneath the brim of the figure’s hat. The faces were designed to be blank, like a Surrealist invocation of neoclassical sculpture.

Throughout the “Théâtre,” gossiping clusters of mannequins the height of my calf are arranged on low stages, dramatically lit, frozen in poses. Bodies made of pliable wire armatures and heads modeled by the Catalan sculptor Joan Rebull in unpainted plaster wear impeccably miniaturized copies of Spring/Summer couture collections from 1945. Spring/Summer 1945. Imagine what those collections must have felt like. I stood there, peering into the stage-worlds, confronted by the still piercing intensity of their presence—of the labor, detail, love, the multitude of fantasies, practical considerations and ambivalent playfulness they mutely project.

A diorama called La Grotte Enchantée, by the brilliant set designer André Beaurepaire, looks like a vision of Piranesi crossed with Bob Fosse, a windblown tableau for mannequins in sequined, embroidered and feathered gowns to stand against demonic red backlighting. Another environment, depicting the arcades of the Palais Royal, contains mannequins in light day-attire promenading, leaning and seeming to chat with one another. My favorite is Le Jardin Merveilleux, a nonsensical dream architecture of drooping cords, festoons, trompe l’oeil painting, obviously fake trees, streetlights, niches, frost and a swing, accommodating a pandemonium of mannequins in gowns for various occasions and in various styles, the figures arrayed together and yet icily apart, like characters in a Bergman film.

Still reeling from my visit, I drove to the closest highway motel for the night. The embroidered sampler over the rather bleak check-in desk announced: Yesterday is the Past, Tomorrow is the Future, but Today is a gift, that’s why it’s called the Present.