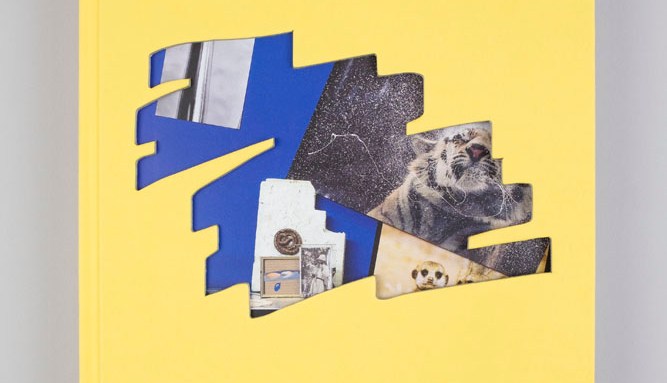 Camille Henrot wants to look at everything. Then she wants to catalogue, systematize, and place it all into a context of her own labyrinthine design. She knows it’s an unhealthy compulsion, but she does it anyway, feeling conflicted all the while.

Her book Elephant Child (2016) is a final installment of what seems to be a grandiose three-year project, beginning with her artist research fellowship at the Smithsonian museum complex in Washington, D.C. The book follows the 2014 installation The Pale Fox, shown at Chisenhale Gallery in London, and the celebrated video Grosse Fatigue, which won the Silver Lion at the 2013 Venice Biennale. These projects share imagery, language, and formal methodology, and together create a kind of gesamtkunstwerk, a complete—in this case, purposely incomplete—work of art, in which Henrot has attempted to itemize the entirety of human experience.

In all her forms, Henrot dazzles her audience with what she has described as “an experience of density itself.” In the film, information is communicated at the level of mythology, spit from a spoken word artist, through a parade of browser windows, images of ancient artifacts, and webpage screenshots. For The Pale Fox, Henrot meticulously arranged a mass of these fetishes in a room painted electric blue. The organized mess, she explains in the book, includes a wall of objects corresponding to the law of continuity and a frieze of clippings representing Leibniz’s principle of sufficient reason. The book layout suggests a textbook, with taxonomical chaptering and all kinds of photographs, stills, and drawings that seem to be illustrative, but add further density to the tome.

The Pale Fox takes its name from a 1965 French anthropological study of the Dogon of Mali, a people known for their remarkably constructed villages, flamboyant masks, and deep cosmology. The study, flawed, biased, and largely debunked by successive anthropologists, nevertheless provides a poetic, mythological compendium of a singular culture. At the study’s core is the story of Amma, the Dogon creator god who tries to realize the world in a drawing, which is where Henrot’s book begins. At first, Amma overthinks his gesture and fails, but then he tries again, and on his second try, gets it right with a drawing of a nice round egg. The fox from the title is a god named Ogo, a trickster who foolishly believes he too can create the universe, but fails, out of “morbid curiosity” and “excessive impatience,” the same indulgences that motivate scientists, museums, and, the rest of us, especially Henrot.

As she unpacks the myth, Henrot’s writing skips among references, mostly to world mythologies and European thinkers like Balzac, Benjamin, Merleau-Ponty, and Schopenhauer. As with many scholars, Henrot is an aggregative thinker, and she has a great talent for weaving tumbling narratives from quotes, anecdotes, philosophical aphorisms, and economical summaries of academic theories. She gives her own idiosyncratic tour of human thought, which sounds high-minded, but she uses the search-engine scavenger hunt as a model for how to drive her compulsive narrative.

Connecting seemingly disparate fields of knowledge was on Einstein’s mind when he coined the term “unified field theory,” Aldous Huxley’s in The Perennial Philosophy, and Joseph Campbell’s when he devised the monomyth theory, which attempted to construct a single structure to understand all human mythology. It’s a Sisyphean goal for any work of art–book, installation or video—and Henrot knows it, but that doesn’t stop her from making a good effort.

The book is a fitting medium for Henrot. She knows how to lead her reader with intellectual bread crumbs and, like the artist Frances Stark, Henrot’s visual thinking emerges out of a reader and writer’s impulse. Much of her work is rooted in the act of reading or listening. At her 2015 show at Metro Pictures in New York, she installed phones with prodding questions programmed to play whenever the receiver was lifted.  Loose drawings and watercolors also included in this exhibition suggest New Yorker-style cartoons, with caption-like titles. And though visually rich, Gross Fatigue functions as one long spoken word piece. Even the images embedded in the browser windows beg to be read, floating across the screen with the assurance of subtitles.

Despite her skill, Henrot is not particularly comfortable with text. She considers language to be a dangerous tool used to subjugate people. In the book, she quotes Barthes: “Language is fascist, but literature is a force for freedom.” “By using words in their different senses and signifiers, and by making them travel from one language to another,” she contends in regards to literature and translation, “one can destroy the authority of language.” Likewise, the press release describes the book as “devoid of authority,” which, to me, seems like an impossible claim, and somewhat simple, considering Henrot knows that even the most neutral seeming reference materials are dripping with prejudice. Maybe Henrot is reacting to the The Pale Fox, the original book, which is partly responsible for twisting the European perspective on African cultures. In a way, by stating her agenda, she undermines her own freedom to create.

Nevertheless, Henrot has set impartiality as her firm goal, even if, as with Ogo’s attempt at creating the world, failure is inevitable. To do so, she uses a handful of methods, including the torrent of aforementioned citations in her text, but also, collaboration with fellow writers. For the bulk of the text, she dictated the words aloud to curator Clara Meister, which was then revised by several editors, including poet Jacob Bromberg, Rhizome artistic director Michael Connor, and curator Kristina Scepanski. Like the mythtellers she references, Henrot is working in the oral tradition, not the written one, which is highlighted by her interview with social anthropologist Monique Jeudy-Ballini that concludes the book. She wants her authoritative words diluted, and whether or not such a thing is possible, it’s satisfying to watch her experiment.

There seems to be a mimetic fallacy to Henrot’s approach. By truly expressing the sensation of being overwhelmed she manages to (successfully) overwhelm the reader. So, very quickly, the book’s meaning crumbles under the weight of its own informational load. While this might ruin other books, it seems to be the point of Henrot’s. Just when you think you’ve got your arms around the text’s big idea, she presents you with a series of graphs, charts, and flow diagrams, which have the appearance of making order of out of chaos, but in fact do just the opposite. You might think that this all makes sense to Henrot, that this vast network of references is her own encoded language—which, she says in the book, is just as important as public language—but she has purposely “over-systematized” her own design. She’s corrupted any possibility of overarching ideology, or conclusion, and has instead turned her archival project into what she calls a “game.” It’s her way of refusing the goal of science—to know everything—and the silly mission of the museum–to have everything—two forms of possession.

This is the pale fox at work. The artist is a trickster. For Henrot, the solution to the contemporary plague of information addiction is to tear down tidy classifications. Instead, we must sabotage our reductive attempts to understand the world. Our best chance, she thinks, is to exhaust ourselves into enlightenment. “Fatigue,” she says, “is a way of possessing knowledge without using it as a means of domination . . . Fatigue teaches us to let go.”