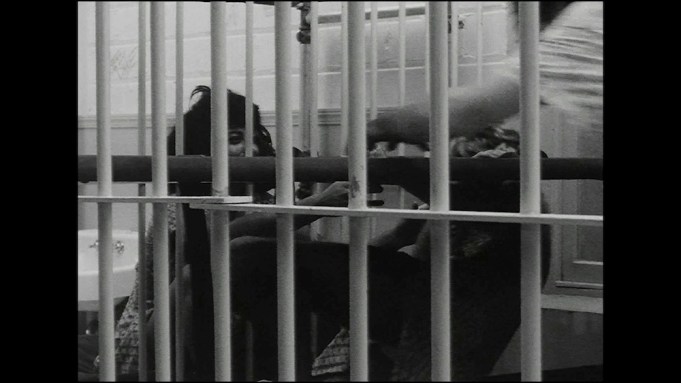 Have you ever felt imprisoned by a creative work, be it a novel, film or piece of visual art? Filmmaker and artist Tony Conrad is intrigued by that phenomenon.

For his upcoming show, “WiP” (Jan. 17-Feb. 16), he’s transforming New York’s Greene-Naftali Gallery into a prison, complete with barred cells, plumbing and cots. (So for a month, the Bayview Correctional Facility, at West 20th Street and 11th Avenue, will not be the only lockup in Chelsea.)

“What is it about being an artist, author, playwright or actor that provides some kind of authority over the viewer or listener or reader?” Conrad asked in a phone conversation with A.i.A. this week, speaking during a break from installing his show.

The show’s title stands for “women in prison,” a genre of exploitation film. The title work is an hour-long video, created from excerpts of six hours of 16mm film shot in 1982-83. “I shot it on a prison set that I built in my Buffalo studio, most of the dialogue improvised,” Conrad said. “I asked artists and musicians to participate. At the time I was friendly with Tony Oursler and Mike Kelley,” he said, both of whom appear in the film.

But film installations were not a widely used medium at the time, Conrad noted, and he didn’t feel he had sufficient material for a feature, so he sat on the film for a while to let other ideas develop as to how he might use it.

“I waited, and finally video became as inexpensive and high-quality as film was. In the meantime 30 years had gone by,” Conrad said, laughing.

Meanwhile, Conrad’s landlord had put the building that housed his studio up for sale, and Conrad bought it in order to preserve the set. News of Kelley’s death came while Conrad was starting to contact some of his actors to reprise their roles.

“But the good thing was I had a visit from Carol Greene, and she looked at my set and said it’s beautiful, why don’t you have it in New York? Of course I had bought the building so I didn’t have to move it!”

“And it’s not so much a matter of art world politics,” Conrad stressed. A wider social commentary has been no small part of the artist’s ouevre, and the literal issue of incarceration is also important in the show.

“When I travel back and forth between Buffalo and New York, I pass three or four prisons on the way,” he said. “It’s unbelievable, the number of people who are being warehoused upstate.”

Attending the Louis Vuitton Show With the Haim Sisters