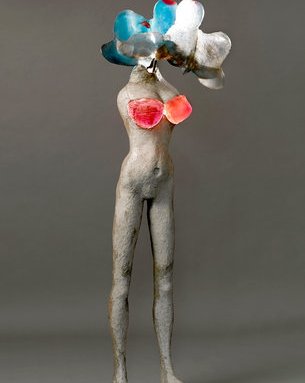 Art in America’s critics write their way through the best of 2012. Ruba Katrib is Curator at SculptureCenter in Long Island City, New York. She recently organized the critically-acclaimed survey of contemporary Surrealism, “A Disagreeable Object.”

“Alina Szapocznikow: Sculpture Undone, 1955-1972” at the Hammer Museum, Los Angeles, and Museum of Modern Art, New York
I feel very fortunate to have seen this refreshing exhibition in its two American venues. Szapocznikow’s sculptures, often made of resin and foam, are mysterious, sensual and provocative. Her approach to the body—isolating parts like the breast, mouth and stomach—is haunting. One of the films on view, Helena Wlodarczyk’s Trace (1973), filmed after the artist’s death, is a moving portrait of Szapocznikow sculptures staged within an urban environment. The activation of the sculptures through the camera’s movement is a compelling recontextualization of the work in relation to actual bodies in space.

Sturtevant at Moderna Museet, Stockholm
A comprehensive large-scale presentation of Sturtevant’s objects—mostly remakes of other artists’ works—amounted to an unsettling and challenging presentation that overtly complicates many attitudes toward recent art production. Ranging from Sturtevant’s edited videos of television to her well-known remakes of Warhols, Beuys works and Harings, the exhibition itself moved beyond an intellectualization of the premises to an actual encounter.

“Anthea Hamilton: Sorry I’m Late” at First Site, Colchester, UK
With this exhibition, Hamilton brought together a tremendous body of previously existing and new work. This involved an array of pop images, from disco-era John Travolta to a young Karl Lagerfeld, and turned them into sculptural still lifes. Hamilton’s evocations of the body and disparate images and references created immersive environments that referred to a range of mediated experiences, from television to shopping. Hamilton expertly ties flattened images to sculptures, spatializing what is usually consumed in only two dimensions.

Darren Bader: Images at MoMA PS1, Long Island City, N.Y.
Presenting his work for the first time in a solo museum exhibition, Bader made a breakthrough in his ongoing inquiry into contemporary art and popular culture. A highlight was the shelter cats and iguanas advertised for adoption, which required a negotiation of a new kind of sculptural space.

“Aaron Angell: Bumpkin” at Rob Tufnell, London
This show was a concise grouping of Angell’s seemingly anachronistic sculptures and paintings. His intimate ceramic sculptures on tabletops depict discrete environments, which could be sets inspired by fantasy novels and video or role-playing games. Crudely rendered with forms drooping and details obscured, Angell’s sculptures are at once playful and sinister, and also abstract, referring to the popular imaginings of the war and adventure of “ancient times.”

Geoff Dyer, Zona: A Book About a Film About a Journey to a Room
What could be better than watching Tarkovsky’s film Stalker? A close second is reading Dyer’s blow-by-blow account of the film, which features an epic and abstracted journey into another dimension riddled with social and political innuendoes. The meditative pace of the original is filled out through Dyer’s observations, research and musings ranging from historical information to personal anecdotes. The written form manages to expand the already time-warped film into yet another dimension.

“Gelitin: The Fall Show” at Greene Naftali, New York
Each sculpture in this exhibition contained the mechanism for its own destruction, an invitation to participation that visitors gleefully embraced. Made of a range of materials, the works included clay forms, stuffed toys and readymades, and they aggressively interrupted the calm of the gallery through a cacophony of alarming thuds. Calling to mind the self-destructing mechanical works of the Nouveaux Réalistes, Gelitin’s poked fun at much of the overproduction and preciousness in contemporary art.

“Alice Channer: Cold Blood” at Lisa Cooley, New York
Channer’s first solo exhibition in New York was a refreshing take on synthetic and unstable materials like shampoo, bronze and polyurethane resin. The forms often reference organic shapes, touching on the relationships between organic and inorganic compounds in relation to the body and industry. Channer also challenges the viewer’s movement through space by creating a direct negotiation between the body and the objects, her works protruded from the walls, were dispersed on the floor and hung from the ceiling.

P!, New York City
I am really looking forward to following what Prem Krishnamurthy, of graphic design firm Project Projects, continues to do at this new Lower East Side space, which unapologetically and incisively merges art and design. Since September, Krishnamurthy has laid the groundwork for a program of exhibitions built in stages, showing works by artists and designers like Karel Martens and Sarah Oppenheimer, as well as hosting lectures and parties. P! also traverses the spoken and unspoken parameters of displaying and selling a range of objects and experiences in a storefront space.

Interiors Maven Brigette Romanek on Photography, Her Favorite Cars and the Watch She Rarely Wears