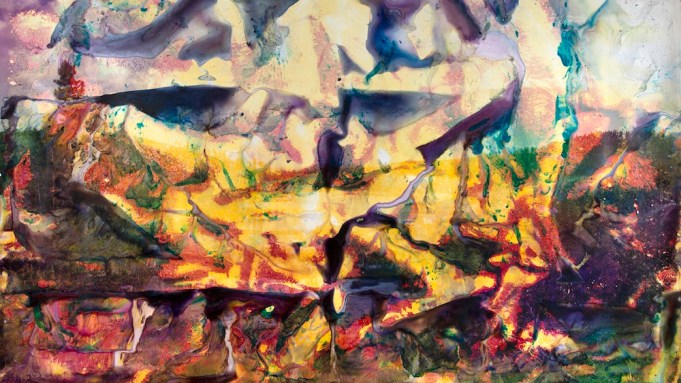 Like Art Basel, which branched out from Basel to Miami in 2002 and will add Art Basel Hong Kong this month, Paris Photo established a new venue this year with Paris Photo Los Angeles. The fair, which will have its 17th edition in France in November, chose Paramount Pictures Studios in Hollywood as its L.A. beachhead. Each gallery represented there was in either a booth on one of three enormous sound stages or a storefront built into one of the period facades on the New York City back lot. In keeping with this setting, Paris Photo director Julien Frydman devoted a section of the fair to screenings of experimental films and encouraged exhibitors to explore the interface between still photography and the moving image today.

Digital technology has made the distinction between a photograph and a video clip shakier than it used to be. This ambiguity was turned into an attention-grabbing conundrum at several galleries, among them Catherine Edelman Gallery (Chicago) and Gallery K.O.N.G. (Seoul). At Edelman’s booth, frames hung on the wall contained, instead of a photograph, a flat screen on which artist Gregory Scott appeared in a gallery setting, watching himself install paintings there. In a sequence titled Inside Rothko, the gallery wall has a rectangle cut out of it, behind which Scott meticulously mounts a Rothko painting so that it will look to us as if it’s on the wall. A few minutes later, he walks around to the front of the wall, peers into the painting, and then steps through it as if it were a James Turrell light scrim rather than a Rothko.

Judging by the crowd around a comparable still/video piece at K.O.N.G., Leenam Lee’s Mountain Villa and Lofty Recluse (2012), people found that work even more mesmerizing. Here too, a frame on the wall contained a flat screen—a vertical one on which an ancient Chinese landscape painting came to life as artisans worked in little shops, wayfarers passed along a mountain road and a canoe was paddled ashore on a lake. All the while, the landscape blossomed with brilliantly colored spring foliage that turned into the full bloom of summer, faded with coming of autumn, and finally reverted to monochrome in the winter snow. Grace K.H. Kong told me that this was the only one left of five she had brought, each priced at a bit over $30,000.

The Parisian Galerie DIX9 had video only. One of the pieces, Sophia Poméry’s Still Water (2010), shows a hand dipping a thick calligraphy brush into clear water and slathering it on a table top. There the water transformed into an enigmatic picture but turned back into a puddle again as it dried up.

While these pieces were scene stealers, still photographs dominated. Last November, Paris Photo had over 120 booths whose contents spanned the history of photography. Paris Photo Los Angeles, with half the exhibitors and an emphasis on contemporary work, offered a more coherent experience. It showed the art of photography to be in an upbeat mood. Video is not usurping the place of photography; the distinction between photography and other media is being blurred in a way that enlarges photography itself.

If an expansion by still photographers into moving pictures is one example of such enlargement, the preoccupation of photographers with the history of painting is another. A painterly tour de force on view at the Paris’s Galerie Pièce Unique was Hiroyuki Masuyama’s 2012 recreation of the 19th-century landscape painting Veduta di cava l’Avvocatella, by Giacinto Gigante. This was a luminous photograph not on a flat screen, but on an LED lightbox, where the painting’s composition of two men standing in a Romantic setting was recreated with real people in period costume standing in the actual locale. Predominantly, however, the painting theme at Paris Photo Los Angeles took the form of abstraction rather than figuration.

Another of Scott’s videos was of skeins of color being thrown onto a white ground, turning it into a Jackson Pollock, until a knife starts cutting it up in pieces and we realize the colors were icing on a sheet cake. More earnest and serious were the examples of still photography’s embrace of abstraction seen at the upscale L.A. gallery Regen Projects. Four of the six photographers on the gallery’s roster—James Welling, Willem de Rooij, Marilyn Minter and Walead Beshty—were represented by pure abstractions, and the other two, Catherine Opie and Doug Aitken, give a very abstracted treatment to recognizable subjects.

The same was true of the most recent piece by Matthew Brandt on view at L.A.’s M+B Gallery. This 2013 expressionist abstraction of Brandt’s, Blacktail Lake WY 4, represents a new phase in a series that has attracted considerable attention. It exemplifies yet another way in which photography is expanding its horizons, since Brandt has been trying to get beyond the mere representation of his subjects by incorporating the material of the subject matter into the photographic process. The large abstraction had been soaked in water from the lake itself. Earlier attempts included portraits into whose processing the bodily fluids of the subjects were mixed.

Other examples of this desire to incorporate reality into one’s photography could be found. New York dealer Andrea Meislin had a piece by the Israeli photographer Ilit Azoulay, Tree for Too One (2010), that was a totally digital collage of disparate subjects made to look as if they’d been assembled on a wall. In order to muddy the issue of what was real here and what was a computer-generated mirage, Azoulay had inserted a few rough-cast patches of plaster into the surface of the piece.

Chris McCaw is a pioneer in such metaphysics. In his “Sunburn” series, he’s been working in the interface between mere imagery and physical reality for a decade. Stephen Wirtz Gallery (San Francisco) had a 2013 example; done on “unique gelatin silver paper negatives,” this image of the sun traversing the sky was so severely solarized that the subject had burned an arch-shaped slit through all four of the pieces of photographic paper. McCaw came upon this effect by accident when, while trying to make an all-night exposure of the stars on a camping trip, he drank too much whiskey and failed to wake up in time to close the lens before sunrise. As a result, the sun burned a hole in his negative.

Alison Rossiter, at the booth of New York dealer Yossi Milo, works with photographic paper that is well past its expiration date, sometimes by as much as 100 years. Each of her black-and-white abstractions was printed on a Belgian paper that expired sometime around 1940 and was made up of four sheets in a grid, the edges of each sheet curled by its age and the rigors of Rossiter’s post-mortem processing. The pieces were in effect low relief sculptures in the same way that McCaw’s was where the sun had burned through the paper and warped it. John Chiara’s abstract direct positives at L.A.’s Rose Gallery were similarly misshapen prints. The artist uses a room-sized camera obscura so large it takes a flatbed truck to transport it to the landscapes that are Chiara’s subjects.

Some extraordinary examples of vintage work were also on view. The largest single group, shown by the Parisian Galerie 1900-2000, were 30 prints made by the Surrealist Man Ray before World War II. Patricia Conde Galería from Mexico City had a single pre-war masterpiece by Hungarian photographer Kati Horna, primarily known as an associate of the photojournalist Robert Capa. In this gem, Horna superimposed a self-portrait on an ancient Spanish building in such a way that her eye was trapped behind the prisonlike bars on a window. New York’s Howard Greenberg Gallery offered two other vintage surprises from photographers I thought I already knew all about. In a group of familiar Robert Frank pictures from the 1950s published in his book The Americans was a single print I’d never seen, of John F. Kennedy and Richard Nixon together in the days before either was president. Likewise, an adjacent wall of prints by recently discovered street photographer Vivian Maier included another image I hadn’t come across before—a grocery window display with a pair of feet amidst stacks of canned vegetables—that was perhaps the best image of hers I’ve ever seen.

The 35 Best Gifts for Coworkers That They’ll Actually Want