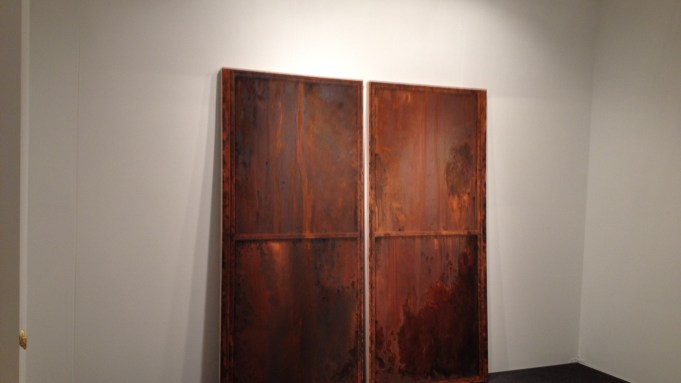 Taking place for the 10th year at the Deauville Beach Resort, the NADA Miami Beach fair (organized by the New Art Dealers Association) offers a more relaxed and spunky vibe than Art Basel Miami Beach, which takes place at the convention center. The galleries are younger, but some of the same buyers, like Bed Bath and Beyond founder Marty Eisenberg, and London’s Poju and Anita Zabludowicz, were seen roaming the sales floor.

Visitors constantly bumped into a sculpture by Rodriguez, made from measuring tape affixed with rivets into a geometric abstraction and hanging from the ceiling by a string, but it just spins and comes to rest. “For a dealer to have works that can take a beating, it’s great,” Curro told A.i.A.

Werble and an assistant bravely stood at the edge of Brock Enright’s installation, which was just a couple of feet deep but took up the dealer’s entire tiny stand. They were warning preview visitors not to step on the floor piece, which was a carpet of poppy seeds. There were a few stray footsteps. “But it’s supposed to be sort of a Zen garden,” said Werble, “so the imperfections are okay.”

Aldridge’s large wall sculptures each replicate, at six feet high, the particular shape and details of a shirt pocket, usually from men’s clothes, down to pleats, buttons and fabric patterns. “She’s playing with 2D and 3D, painting and sculpture,” an assistant named Margot explained. But with allusive titles like Humanity Rose (paint the objects and not the atmosphere), she seems to be after even bigger game, too.

The self-trained Tomoki Kurakawa makes brightly colored, graphically bold small paintings based on scenes from everyday life. So what everyday event inspired a painting with a campfire on a tile floor near a parked bicycle? “The artist doesn’t talk about that,” a gallery attendant told me.

Toril Johannesen does a survey of the frequency with which certain words appear in different magazines and journals, director Randi Thommessen told me, to create her prints on paper. She conceived the one on the word “revolution” before the Arab Spring, Thommessen said, “and when that happened, it created the spike you see here, and the work became even more topical.”

Baxter, a Miami artist, toys with 2D and 3D in works that collage together images of Henry Moore sculptures and landscapes, in small framed works on paper and on wallpaper that decorated the booth. It’s an eye-catching and rich play with scale and space.

In works that also appeared at the artist’s gallery show, which got interrupted by Storm Sandy, Moon translates iconic works by other artists into a numerical code that is used in creating Braille to say things she can’t say herself, as with the Tracey Emin-style work illustrated here, “to say things the artist feels she can’t say herself.” One painting was marked with colorful dots that, if raised, would spell out “Damien Hirst spot paintings suck.”

Grünfeld works with a top taxidermist, Jim Dempsey told me, to create sculptures that combine parts of two of three different animals. “They’re always in positions of rest,” he said. They are totally convincing and provided a quietly surreal moment that inspired an elderly observer to say out loud, “OMG.”

You could have missed Climent’s sculptural installation, Delivery, tucked away in a tiny mini-booth at Clifton Benevento’s stand. A number of paper bags used for food delivery stand upside down on the floor, showing the names, usually Hispanic in origin, that are stamped on their bottoms. The artist envisions them as factory workers where the bags are produced, and will continue to add to the piece after it’s purchased.