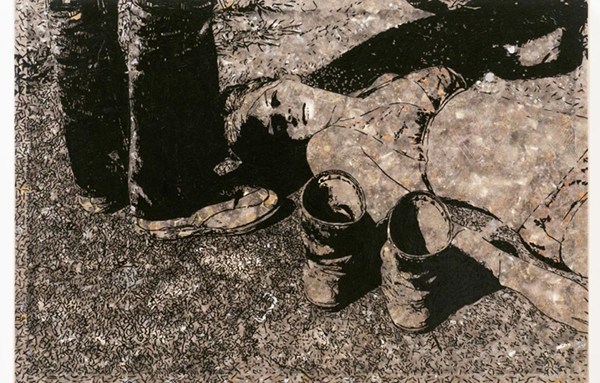 Art in America’s critics write their way through the best of 2011. We’ve asked leaders in the fine arts to highlight the top works in their areas of special focus.

From 1997 to 2007 Raphael Rubinstein was a senior editor at A.i.A., and he continues a a contributing editor. Rubinstein is currently professor of critical studies at the University of Houston. Look for his forthcoming survey on painting in our February issue.

1. Jane Hammond at Galerie Lelong, Sept. 8–Oct. 22
How often does an artist invent an entirely new format for the medium of painting? In her new series of “Dazzle Paintings” Jane Hammond achieved exactly that. Scenes from vernacular photos and hieroglyphic signs are painted onto translucent sheets of mica, underneath which shine layers of crumpled gold foil. The pictures seem to be magically illuminated from within.

2. “Norman Bluhm: Paintings 1967–1974” at Loretta Howard, Apr. 7–May 27
These were the years when Norman Bluhm discovered the Baroque sensuality and opulent palette that would guide his work to ever-greater heights of painterly architectonics until his death in 1999.

3. Jan Frank at Paul Kasmin, May 19–June 18
Jan Frank’s paintings and drawings evoke Alan Saret’s delicate entanglements, Wols’s abrasive lyricism and de Kooning’s sensuality. It’s hard to believe he achieves such density with only ink and correction fluid, or that his apparently abstract work is generated by drawing from nude models.

4. Amy Sillman & Charles Bernstein at Bowery Poetry Club, Oct. 28
A crowd of excited painters and poets packed the Bowery Poetry Club for the premier of Pinky’s Rule, a video collaboration by painter Amy Sillman and poet Charles Bernstein. Perfectly matched with the constantly shifting registers of Bernstein’s poetry, Sillman’s animations, created on her iPhone using only her pinkie, offered revealing glimpses into her creative process.


5. “Llyn Foulkes: Bloody Heads” at Kent Fine Art, Oct. 27–Dec. 17
Since Llyn Foulkes can spend a decade on one of his large-scale, diorama-like lamentations of American decline, I was astounded to be confronted with a show of a dozen or so recent small paintings. Though sometimes harrowing and gruesome, they revealed a fine painterly hand and unexpected tenderness-plus some wizardly frames.


6. Beverly McIver at Betty Cuningham, May 19–July 1
Beverly McIver’s paintings have gotten more autobiographical since she relocated to North Carolina.  Gone is the clown persona and black face/white face makeup. Instead it’s just the artist and her mentally disabled sister Renee, depicted mostly in headshots that balance fauvist subjectivity with unadorned quotidian realities.

7. “Reverie” at Zürcher Studio, May 23–July 20
Any show that includes canvases by two of the best painters on the planet (Shirley Jaffe and Stanley Whitney) doesn’t need much by way of explanation. Modestly describing this 7-person show as “a collection of paintings, a glimpse of the sensibilities of the painters who made them,” curator-painter Stephen Westfall denied any grand conceptual ambition, which left viewers plenty of room to exercise their eyes.

8. Julio Galán at Ramis Barquet May 26–July 9
Finally, with this small but well curated show, New Yorkers got a chance to rediscover the prodigious Julio Galán, an ’80s art star who was already largely forgotten when he died in 2006.

9. “Bernard Cohen: Work of Six Decades” at Flowers, New York, Sept 16–Oct. 22
Until this fascinating exhibition I’d never in my life seen a painting by Bernard Cohen, a line-obsessed British artist in his late 70s. No wonder-his previous New York show was in 1967! His work has gone from almost completely empty canvases in the 1960s to the delirious geometry of recent years. Somewhere in between is a knockout painting titled Sprayed Plum on Raw Canvas (1963).

10. Howard Hodgkin at Gagosian, Nov. 3–Dec. 23
Hodgkin has never been my cup of tea—the paintings seemed too precious, Bloomsburyish, overripe, even pleased with their lush effects. But around 2005 he began making big, loose-gestured paintings with unprecedented directness. This revelatory show of recent work is making me rethink his oeuvre.

WWE Shares Up About 9% as Speculation of a Sale Swirls