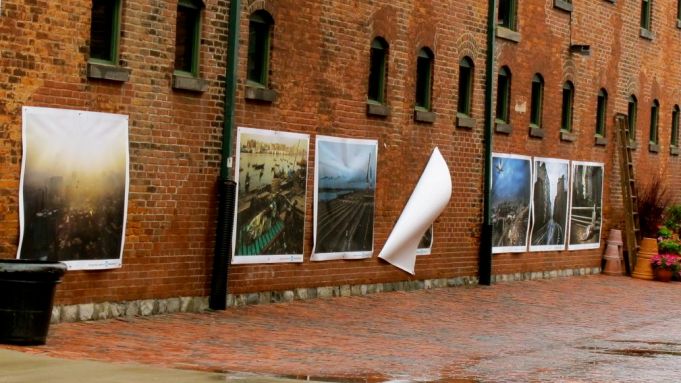 The 15th annual CONTACT Photography Festival in Toronto, Canada, can’t yet compete in prestige or name recognition with fairs in Madrid, Paris, Houston or Arles. But with 1.8 million attendees viewing work by 1,600 artists at 212 venues, it’s the biggest. The goal is “to become the most significant festival,” says executive director Darcy Killeen, adding, “It’s not about marketing bells and whistles but programming.”

When it began, the sole institutional venue was the Museum of Contemporary Canadian Art (MOCCA). Cofounder Stephen Bulger, president of the Association of International Photography Art Dealers, recalls its grassroots origins, with cafés and small galleries pitching in and around 50,000 locals attending. “Now,” Killeen says, “we’re basically taking over every major cultural institution,” including the Art Gallery of Ontario, the Royal Ontario Museum and the Power Plant, among many others. Another advance is a professionally curated program organized around a theme-“glue that brings it all together,” Killeen notes, “so when you go from gallery to gallery you see continuity.”

“Figure & Ground” is the 2011 theme, interpreted by artistic director Bonnie Rubenstein as the relation of foregrounded human figures with a background of the environment-nature, the city or technology. Each image represents not just a pretty picture but socially engaged photography. Daguerre called his invention “a mirror with a memory.” In Toronto, the home of culture critic Marshall McLuhan, it’s a medium with a message.

For the entire month of May, art photography infuses the entire city. Thought-provoking photographs are not just in galleries, but on billboards and posters in the streets, the airport, subway, bars, boutiques and restaurants. While walking in the commercial district on busy West King Street, 13 larger-than-life color photos by Robert Longo assault your vision. They’re from his “Men in the City” series (1979–87), shots of people suspended, falling and flailing, poses he achieved by throwing tennis balls at his subjects. In a post-9/11 world, they take on sinister significance. You look behind you for projectiles.

Outside MOCCA, an image by photographer Elle Flanders, in collaboration with architect Tamira Sawatzky, is pasted on a giant billboard. Isdud shows a field of flowers with a ruined house in the background, a relic of a Palestinian home before the land became Israel, symbolizing the “presence of absence.” “Whoever said bigger isn’t better, they lied!” Flanders commented in a television interview.

Taking a streetcar down the city’s central artery, Spadina Street, I was riveted by a desolate but dignified portrait, installed in a parking lot, of a young man in Accra, Ghana. In the four-by-six-foot panel, Kofi Abanga (2010), South African photographer Pieter Hugo shows him standing amid smoldering digital debris—the remains of our electronic obsessions, demolished for recycling.

The best example of this year’s theme is the “Oil” series, comprising 53 large-scale color photographs by the Canadian Edward Burtynsky, at the Royal Ontario Museum until July 3. Paul Roth, now executive director of the Richard Avedon Foundation, organized the show for the Corcoran Gallery in Washington, D.C., two years ago, and it’s been traveling ever since.

Roth’s reason for choosing Burtynsky? “Here you have maybe the greatest landscape artist of his generation working on a subject of great importance to everyone.” The subject, told in three sections, is humankind’s impact on the land resulting from our unquenchable thirst for oil. “They’re probably the best photographs I will ever see,” a Canadian woman in the gallery said. “And it makes you think: Our world is disappearing under the impact of oil.”

For 12 years Burtynsky roamed the earth, making images to show “Extraction and Refinement,” “Transportation and Motor Culture,” and “The End of Oil.” He documents the empty wasteland of rusty derricks at played-out oil fields in Socar Oil Fields, Baku, Azerbaijain (2006). In California, where pumpjacks throb night and day, sucking crude from the ground, he bears witness to the mechanics of extraction, the treeless landscape punctuated only by electrical poles. Scenes of Los Angeles freeway interchanges curling over and under like a nest of serpents, a sprawling suburb in Las Vegas and a motorcycle rally in South Dakota establish the uses of black gold. Then shot after shot of junked fighter planes, wrecked cars and rusty auto parts-the aftermath-lead to the most horrifying images of all: Bangladesh, where oil tankers go to die. Tiny human figures, devoid of any protective gear, break up enormous ships with the crudest of tools. A footprint filled with oil on cracked dirt brings all the aerial photos down to earth.

“After all these images made from a remove,” Roth says, “the footprint allows viewers to think about where they fit in.”

Intentionally open-ended, with neutral titles identifying only their locations, the images pose as objective recordings, descriptive and unsentimental. Whether shot from a great height or at ground level, they’re visually compelling-stunningly beautiful, in fact-and packed with documentary truth and emotional power. They draw you in through clarity, detail, color, structure and spectacle.

Burtynsky communicates ideas without words. “I make sure the quality is there so you get that second reading,” Burtynsky told A.i.A. in his studio. “I try to pack enough information in my images,” he explained, so the viewer is drawn in “to explore what else is going on in there.” The key duty of a visual artist, he feels, is to engage the viewer with the work. “Then once you enter it, it forces you to think about the subject and awakens your consciousness.”

This Bonkers Half Moon-Shaped SoCal Home Starred in ‘Westworld.’ Now It Can Be Yours for $20 Million.