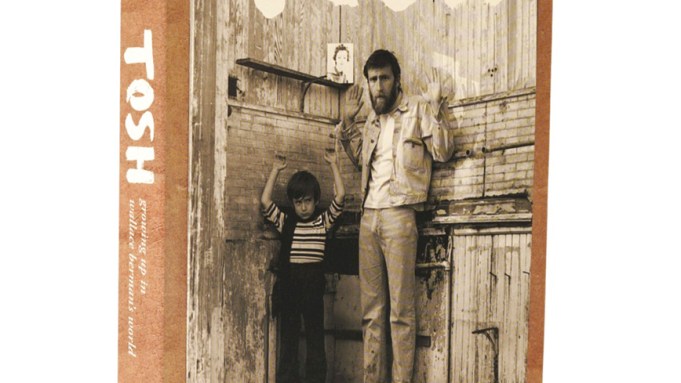 Is there a more expansive literary form than the memoir? Once regarded simply as a first-person account of one’s experiences, the practice has over the past century—since Gertrude Stein’s Autobiography of Alice B. Toklas (1933), at least—morphed into an emblem of subjectivity and a vehicle for formal experimentation. With Tosh: Growing Up in Wallace Berman’s World, the author, the son of the mid-century, Los Angeles artist Wallace Berman, adds a curious dual memoir to the genre’s history. While the book testifies to the flexibility of the form, its twin subjects, flickering focus, and lack of attention to the psychological motivations that usually animate such accounts make it as unorthodox as Tosh’s bohemian upbringing and his father’s compelling art. Although its fifty bite-size sections add vivid detail to our picture of the postwar art scene in Los Angeles, they provide little insight or even information about Wallace’s art.

Born in 1926, Wallace was a virtuoso of assemblage and collage art alongside such aesthetic fellow travelers as Bruce Conner, George Herms, and Jess. During the decade before his death in 1976, he went on to pursue more conceptualist genres, including experimental film and multiples (mail art, photocopies, and artist’s books). He is invariably (and aptly) linked with the Beat poets. Their shared anti-elitism expressed itself in the use of vernacular modes and idioms, and an embrace of anarchist politics, both joyful and paranoid, that presaged the counterculture of the 1960s.

Wallace’s distrust of officialdom was reinforced early on. His first solo commercial exhibition, at the avant-garde Ferus Gallery in Los Angeles in 1957, was shuttered by the LAPD. Berman was convicted of obscenity, based solely on a small image of genitalia by the occult artist Marjorie Cameron that he had collaged within one of his works. Tosh suspects that a Ferus Gallery co-owner, artist Ed Kienholz, alerted the police to garner publicity for the gallery, although he believes that Kienholz failed to foresee Wallace’s humiliating incarceration. (This is, of course, supremely ironic in light of the near-closure of the Los Angeles County Museum of Art for its exhibition, a decade later, of Kienholz’s “obscene” figurative installation Back Seat Dodge ’38.) The Ferus incident’s repercussions were far-reaching: they prompted Wallace to withhold his work from formal gallery exhibitions for the rest of his life and to move the family to San Francisco and later Larkspur in Marin Country, locations seemingly more congenial to free expression. This sojourn lasted just a few years, bridging the end of the 1950s and beginning of the 1960s, but it was highly consequential. It provided Tosh (b. 1954) with his first real exposure to literature, experienced in lengthy visits to San Francisco’s City Lights Bookstore, owned by Beat poet Lawrence Ferlinghetti. The tidal wave of commercialized attention the Beats had begun to receive had a less salutary effect on Wallace, however, inspiring his decision to move the Bermans back to Los Angeles.

Wallace’s rigidity apparently remained out of view in favor of the expression of its precise opposite: a remarkable talent for friendships with the talented. Dating back at least as far as his high-school relationship with Sammy Davis Jr., he went on to connect with numerous musicians, spanning the spectrum from jazz to punk. Ditto for actors: Dennis Hopper and Dean Stockwell were among those he chummed with and encouraged in their art-making. (Stockwell demonstrated his gratitude with the gift of the Topanga Canyon house where Tosh spent his adolescence.) The warm and approachable Wallace seems always to have been in the right place at the right time. He appeared in unsolicited roles in such films as Andy Warhol’s Tarzan and Jane Regained . . . Sort Of (1964) and (as an extra) Hopper’s Easy Rider (1969). His face was one of those on the iconic cover photo of the Beatles’ Sgt. Pepper’s Lonely Hearts Club Band album (1967).

Shirley Berman—Wallace’s wife and Tosh’s mother—was also an artist and performer, a legendary beauty whose dance studies were cut short by an ankle injury. Wallace was an early stay-at-home dad, while Shirley, as family breadwinner, appeared in ads for the Bullock’s Wilshire department store. Like many parents of only children, Wallace and Shirley treated Tosh as a quasi-adult, schlepping him nearly everywhere they went. Tosh’s evenings encompassed a glamorous-seeming whirl of people, parties, and events. As a boy and as a teen, he saw adult films ranging from John Waters’s Pink Flamingos to the latest James Bond thriller. He heard local bands in Topanga Canyon bars, and superstars like Roxy Music and the Rolling Stones at major venues. The Bermans attended A-list parties at the home of Elyse and Stanley Grinstein—the patrons and co-founders of the innovative printmaking studio Gemini G.E.L. Despite his tender age, Tosh vividly recalls the historic opening of the first Marcel Duchamp retrospective, at the Pasadena Art Museum in 1963, at which the nine-year-old shared a conversational moment with the avuncular artist and professes to have acquired an intuitive sense of the nature of fame.

But at the heart of the book is a disconnect between life among people with boldface names and Tosh’s often unhappy times at home and school, due largely to Wallace’s mania for control. His personality and preferences—expressed without hesitation—shaped Shirley’s and Tosh’s lives, in the process stunting the boy’s confidence and potential for growth. Father and son “never really talked,” and Tosh seems to have considered himself a loser. Their relationship was expressed mainly through shared musical interests. Were Tosh’s story adapted for the stage, the ideal dramatist for the job would be the late Sam Shepard, the bard of late twentieth-century family dysfunction.

The book reveals a shockingly large number of missed opportunities for communication within the family. Wallace’s behavior was often inexplicable—or at least unexplained. He brazenly shoplifted in front of Tosh. At a party, when a family friend injected heroin in front of the Bermans, the act elicited no comment either at the moment or later at home. Early in their marriage, Wallace forced Shirley to give up her long-established practice of keeping a journal. He did not allow her to drive, instead acting as chauffeur and, presumably, monitoring the family’s comings and goings. Rather than attend Tosh’s high school graduation, he waited for Tosh, Shirley, and her mother in the car, reading the newspaper.

This unorthodox homelife took its toll on Tosh’s mental health. He flunked kindergarten and was forced to confront the indignity of special education classes. He was literally crippled by phobias that made climbing stairs—even to second-floor classrooms—agonizing. When Tosh’s childhood phobias returned in adolescence, Wallace—with tears streaming down his face—spanked him. This scene provides the book’s most affecting, and saddening, moment.

The final years chronicled in the book are a prelude to Wallace’s untimely death. When Tosh finished high school in 1972, he was “mentally still 15.” As 1976 dawned, he was living with his parents, occupying an apartment Wallace had created in the garage for him. Wallace had also recently purchased a white Datsun for Tosh and the family, and it was in this car that he met his death when hit by an intoxicated drug dealer. He died on February 18, 1976, his fiftieth birthday.

The book ends on this day, although in an epilogue Tosh identifies February 19 as the start of his adulthood both “mentally and emotionally.” He went on to become a novelist and poet, the director of the Beyond Baroque Literary Arts Center in Venice, California, and, in his mid-thirties, the husband of Japanese artist Lun*na Menoh. He observes that it took him nine years to write this book, years no doubt spent navigating between the uncritical celebration of a much-loved parent and the emotional disconnect required to survive his unexpected loss. Wallace’s death is announced long before the end of the book, yet when it comes, it feels as abrupt and unprepared for as it must have felt on that day in 1976. That the passage of time has granted the author so little resolution surely—and poignantly—testifies to the lasting power of the father who shaped him.

First Drive: Mercedes-Benz’s Electric Vision EQXX Is More Aerodynamic Than a Football, and You Can Tell