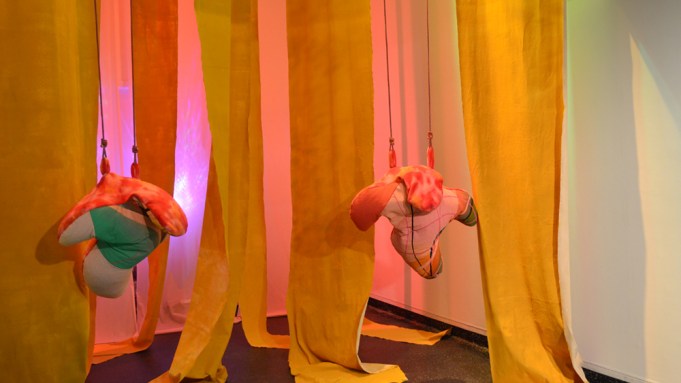 The relationship between people and artworks was at the heart of artist Vanessa Centeno’s exhibition “Embrace,” on view last month at the Front, an artists’ collective in New Orleans. Centeno joined the Front in 2015, and conceived her latest show there as a reaction to the need for touch in today’s political climate of sensationalism and fear. The works were made to be held, coddled, and rested on. When viewers insert their arms in the sleeves of Hugger (2018), they embrace its cushiony mass. Homie (2018) has straps that look vaguely like arms; when worn, they hold the viewer’s body between two breast-shaped pillows on the wall. While erotic, Centeno’s works are never explicit or graphic. Instead they suggest an intimacy that can be both innocent and sexual, without sacrificing the complexity of either feeling.

In the manner of artists like Lygia Clark, Hélio Oiticica, and Ernesto Neto, who made artworks that appeal to the sense of touch to create therapeutic spaces, Centeno imagined “Embrace” as a space of respite from everyday life, where viewers could let their guard down with the help of her hybrid painting-sculptures. Cuddle and Soother, both 2018, hung from the ceiling at chest level, installed amid flowing orange banners made from long rolls of canvas. They appeared as husband pillows or football tackle dummies. Centeno hoped the physical encounters with her works imparted a feeling of vulnerability on the viewers that would encourage them to approach the world around them with a newfound sense of care.

In an interview, Centeno talked about how her youthful experiences are incorporated in her work. The stuffed appendages of Homie recall Chairy, the personified armchair in Pee-wee’s Playhouse. A San Antonio native, she used the chopped-and-screwed technique developed by Houston MCs to remix Simply Red’s 1985 single “Holding Back the Years,” making a psychedelic lullaby as a soundtrack to “Embrace.” When working in the studio, Centeno has a childlike, playful rapport with her works, noting, “Part of the magic in my studio is making jokes to myself or with my paintings and it’s hilarious or it’s sexual or it’s fantasy.” This sociability is dramatized in her video Wall Chatter (2014), where shaking bulbous sculptures emit giggles and chirping sounds. Centeno aims to reproduce her imaginative relationships with objects and materials in the gallery, using her own experiences to envision spaces and physical relations that are at once comforting and uncanny.

Centeno was trained as a painter at the San Francisco Art Institute and the University of New Orleans, and though her works are often three-dimensional, she still considers them paintings. She begins by painting canvases with stripes, angular shapes, and gradient color fields, only to slice them apart and rearrange them, draping and twisting the fabric or stuffing it like a bean bag. In this process, Centeno often adds string, fake fur, Billy Bob teeth, and phallic “ding-a-lings” made of sewn fabric dipped in paint and glitter. These corporeal forms are not intended to mimic actual bodies, but rather to invoke emotional responses—often a simultaneous attraction and repulsion to their frankness. Her palette includes hot pink, peach, and fuchsia, bright colors that generate fantasies of tropical vacations and accompanying feelings of relaxation, playfulness, and sexual arousal.

“Embrace” included the first objects Centeno has made specifically with audience participation in mind, but Centeno’s performances have long signaled how she imagines her artworks might activate and transform their surroundings. In a 2015 performance at PARSE, a residency and exhibition space in New Orleans, Centeno slid across the gallery, emerging from a crumpled fabric tube on the floor. In the performance Visionary Bringhers, Future Tellhers (2018), she and three collaborators (Robyn LeRoy-Evans, Cristina Molina, and Ryn Wilson, other members of the Front’s collective) channeled the legacy of the Greek oracle through mystical spoken-word pronouncements and girl-group dance arrangements, staged amid leafy foam cut-outs enlivened by trippy projections. Issuing whispered prophecies to audience members, the performers championed the roles of artists and women as change-makers and truth-tellers, imagining how art can give life to objects and bring into being new ways of approaching the world.

Centeno’s hope is that, through her work, viewers can come to understand their relationships to objects as dynamic and personally rewarding. She strives to avoid the cold and measured consideration of art cultivated by museums. Her objects, even the ones that aren’t meant to be handled, serve as relics, embodied traces of her convivial process in the studio. Centeno’s work is a reminder that paintings need not feel static, if only we’re able to see them as something full of life.

Brendan Fraser Deserves an Oscar for ‘The Whale.’ He Also Deserves a Better Movie