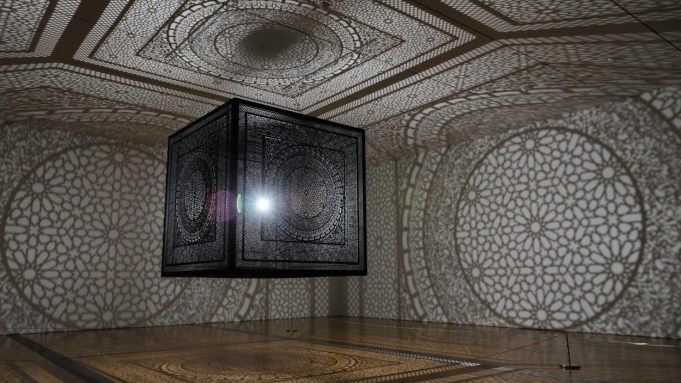 ArtPrize is changing. Touted as the contemporary art world’s largest open-call, public-vote cash competition, ArtPrize is no longer a hyper-local celebration of hyper-realist art. Now in its sixth year, the festival is acting more like an international exposition—albeit one based in Grand Rapids, Mich. (population 192,000).

With entrants’ works exhibited throughout the city, ArtPrize annually draws about 400,000 visitors, who vote online or via a smartphone app; participation is restricted to a zone within downtown Grand Rapids, ensuring that only visitors can vote. All applicants are accepted (with a $50 fee); the work of about three-quarters of the applicants gets shown at one of 174 venues, including museums, ice cream shops, the police station, an abandoned hotel and a convention center. This year, over 41,000 voters selected among 1,537 artists from 42 states and 51 countries. Although it is not technically a commercial event, 30 percent of participating artists report sales. The event closed on Oct. 12, the day after the prize recipients were announced.

Whereas just three years ago, a 13-foot-high stained-glass mosaic of Christ on the Cross took the $250,000 first prize, this year an Islamic-themed installation titled Intersections by Anila Quayyum Agha swept both the public and juried votes—the first time a single work won in both categories. Agha, an Indianapolis-based artist and educator, was awarded $300,000. She shared the jury’s prize with Sonya Clark for The Hair Craft Project; a total of $560,000 in cash prizes were awarded to 8 artists and one venue.

Intersections not only references Islamic design motifs, but also recalls the black cube Kaaba in Mecca. A 6½-foot open wooden cube hangs from the ceiling, and a light bulb inside casts shadows on the room’s surrounding walls, ceiling and floor via intricate laser cuts of abstract geometrical designs in the wood. Like Mecca’s sacred pilgrimage site, Agha’s piece drew pilgrims: thousands flocked to the Grand Rapids Art Museum to contemplate the filigree shadows cast by her shadowbox. The mood among the swarming crowds approached spiritual exuberance.

The popular vote for Intersections demonstrated a significant departure from Midwest Americana in a town some call “Little Jerusalem,” for its large number of churches per capita and its prolific Bible publishing industry. Agha told A.i.A. that she was raised Muslim in Pakistan, but declined to comment about her current religious faith. At the ArtPrize awards ceremony, she preached religious, racial and sexual tolerance.

Perennially mocked for giving a platform to kitsch art, this year ArtPrize invited professionals (Paddy Johnson of New York’s ArtFCity, Miranda Lash, contemporary art curator at the Speed Art Museum, Louisville, Ky., and Scott Stulen, the Indianapolis Museum of Art’s curator of audience experiences and performance) to debate the aesthetic merit of the finalists on live primetime TV. Despite that effort, the platitude “everyone’s a critic” became uncomfortably urgent on the streets. “This is too modern for me,” one spectator said in front of a Kate Gilmore video. “I’m sorry, what makes this art?” asked another. (The public did not nominate Gilmore for any awards, although her artwork was exquisitely installed within the ruins of a former bank vault.)

For their part, several critics and artists took issue with a different facet of the competition: its funding source. Several generations of the locally based DeVos family founded ArtPrize and funded its initial years; the DeVoses are outspoken donors to anti-gay marriage Republican candidates such as Rick Santorum. (Third-generation heir Rick DeVos is the founder of ArtPrize, and currently runs the hedge fund Start Garden; he is not so much the target of critics as his immediate family. His father, Richard DeVos, co-founded the multi-level marketing company Amway.) Paddy Johnson recently called the DeVos money “evil”; artist William Powhida contributed to the competition a drawing, Dear ArtPrize, that criticized the funding source; artist Steven Lambert pledged to donate his winnings, if he won, to the LGBT Fund of Grand Rapids. His pledge was welcomed by ArtPrize’s exhibitions director Kevin Buist in an official statement. (Lambert did not win.)

ArtPrize is addressing its ties to the DeVos family money with major changes in its funding stream. The nonprofit organization this year has received support from an unprecedented number of corporate sponsors and foundations, including Kendall College of Art and Design and the National Endowment for the Arts. Such financial partners will eventually enable the DeVos family to leave the organization of the competition to the art professionals.

UPDATE: This article was amended to fix errors regarding the number of submissions that find venues; the spelling of an artist’s name; the number of recipients of cash awards; and the identity of the cash sponsors of the prize.

‘Her Reign Begins Now’: See Viola Davis as an African Warrior in ‘The Woman King’ Trailer