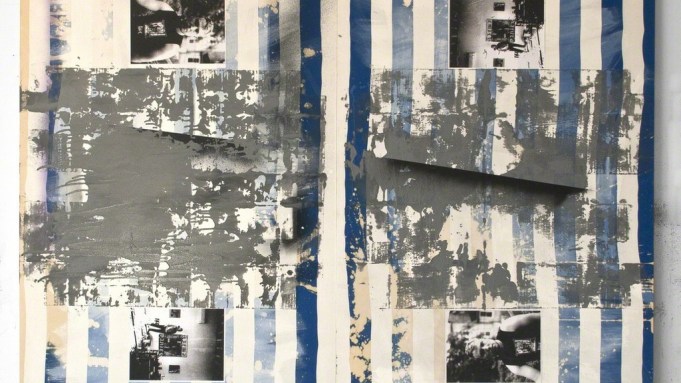 Simon Castets, the French-born director and curator at New York’s Swiss Institute (SI), arrived on this gray Friday morning at NADA New York wearing white Converse sneakers for comfort during his walkthrough of the art fair (May 9-11), along with an eggplant-colored raincoat to protect against the rain. In the SI job for six months now, Castets, 30, was previously an independent curator.

“There’s such a strong presence of nonprofits at NADA,” Castets said. “For a fair to be run by a nonprofit is a unique model.” Founded in Miami in 2003, the NADA fairs are organized by the New York-based New Art Dealers Alliance. Now in its third year, NADA New York is taking place again this year at Basketball City, on New York’s Lower East Side, and numbers nine nonprofits among its 88 exhibitors.

Castets was first drawn to a colorful sculpture by Alex Da Corte at the booth of New York dealer Joe Sheftel. “He used to do works that were a bit like Lynda Benglis sculptures, but made with soda,” Castets said. “He would pour soda on the floor and as it dried it would solidify.” Nearby, at the booth of New York’s Clifton Benevento, he noticed a Michael E. Smith floor sculpture, made of colored sheets of plastic with beetles embedded in the material, which looked almost as though it could have been poured. “Speaking of poured works!” he said, before joking with dealer Michael Clifton about whether PETA would soon be calling.

Nearby, a sound work by Joel Rodriguez lured Castets to the stand of Beta Local, a nonprofit from San Juan, Puerto Rico. The audio work is a live feed of the atmospheric sounds from Rodriguez’s San Juan balcony. Touting the many educational activities undertaken by Beta Local, Castets said, “They are in a kind of in-between space, part educational, part residential, so you don’t necessarily know if you’re supposed to be there, in a great way.”

Another nonprofit, New York’s Petrella’s Imports, has a booth about 4 feet wide with metal shelving that resembles a three-dimensional version of the iPhone newsstand icon. Petrella’s is displaying booklet versions of artists’ projects available via their app. Castets lingered to thumb through the booklets, which include projects by artists like Jesse Stead, Daniel Lefcourt and Sterling Wells. Artist Raul de Nieves, who is showing work nearby, pointed out Stead’s project, which collages together the mountain imagery found on water bottle labels to create a scrolling landscape.

Across the aisle, Castets noted wall-hung assemblage sculptures by Mono-Ha artist Kishio Suga, on display at Tokyo and Singapore gallery Tomio Koyama. On an adjacent wall hang sculptures incorporating wire mesh by Richard Tuttle. “I love juxtapositions like this, which are something you often get at fairs,” Castets noted. “I know this gallery from having curated a show in 2010 at Taka Ishii Gallery, in Tokyo. It was called ‘Aftermath,’ and it took place just before the earthquake. It was uncanny.”

Nearby is ltd Los Angeles, where Castets took note of digitally printed collages on canvas by Alex Mackin Dolan, an artist he plans to include in a show at SI, he said. “His works are about the imagery of environmental consciousness,” Castets noted. The work on view, poisoned waterfowls (2014), juxtaposes images of landscape with printed text under the headline “Reward Offered for Information on Waterfowl Poisoning in Northwest Columbus.”

At a stand offering prints by a dozen artists to benefit NADA and the Brooklyn Academy of Music, Castets pointed out Gossip Girls, a 2013 print by Christian Holstad, based on a New York Times image of several women. Holstad has erased their faces so that they are a gray blur and created glowing new eyes for them using white-out.

“Christian is very much embedded in the art circuit, because he’s been around for a while,” said Castets, “but he’ll go to see, for example, a show of 18th-century tapestries at the Metropolitan Museum, and that might be what excites him most. So his visual vocabulary is unique.”

The fair was a bit of an obstacle course for Castets, who seemed to know every other person there. Stepping away from the BAM/NADA booth, Castets ran into artist Ben Horns, who walked him to Baltimore’s Springsteen Gallery, where some of his works are on view. On the booth’s rear wall is a large two-panel painting with white and blue Daniel Buren-esque stripes, to which Horns has applied bleach, latex and enamel, as well as photocopied images of himself and a close friend. Castets congratulated Horns on learning that the artist would soon move to Frankfurt to attend the Städelschule there.

Works by New York artist Jesse Greenberg, on display at Loyal, a gallery from Malmö, Sweden, drew Castets in from the aisle between booths. His multimedium sculptures incorporate pigmented resin into metal armatures. “The combination of the organic shapes and cold industrial material reminds me of the work of H.R. Giger, the Swiss surrealist artist who designed the creatures in the ‘Alien’ films,” Castets said.

On his way out, Castets reflected on the phenomenon of the fair in general. “It’s a trade show,” he said, “and people have to keep that in mind. You don’t bring the same critical eye as you do to an exhibition. Many people do, and I think it’s unfair. I seriously envy people who can have such a grasp of the thousands of works they’ve surveyed at a fair in a few hours! I find myself so overwhelmed, I take pictures on my phone for a visual diary so I can remember things.”

“It’s probably the worst setting to discover anything because you’re drawn to what you know. Anyway I hate the word discovery—as though the artist were living in a rainforest or something,” he added. “But you can learn about something that is new to you.”

‘You Haven’t Heard the Last of the B-52s’: America’s Favorite Party Band Tries to Say Goodbye