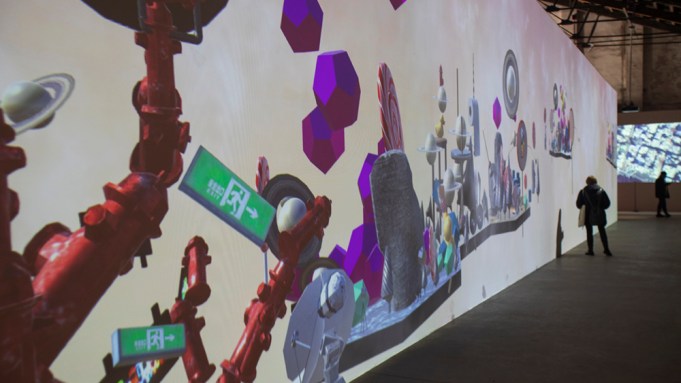 For anyone interested in China—or in sexual liberation or media art—the Taiwan pavilion at the 58th Venice Biennale not only far outpaces its national competitors (mainland China, Hong Kong, and Macao), it also offers one of the liveliest viewing experiences in the entire global event. Veteran new-media artist Shu Lea Cheang, whose interactive work Brandon (1998-99), about murdered trans man Brandon Teena, was the first net art project ever commissioned by the Guggenheim Museum in New York, has filled four rooms in the grim Palazzo delle Prigioni, a onetime prison, with a circle of freestanding panels and a scattering of flat video monitors canted on the floor. All the screens flash bright, quickly changing images of young people, many in drag, enacting fantasy scenes that dramatize the evolution of gender politics from the eighteenth century to the present.

Curated by Paul B. Preciado, a historian and theorist of sexuality, the show scrutinizes the conflict in today’s “control societies” between a powerful drive toward unfettered sexual expressiveness and fluidity (often abetted by social media) and the pervasiveness of technological surveillance and social conditioning (often abetted by social media). The exhibition’s title, “3X3X6,” refers to an ideal prison design now being touted throughout the world: a three-meter-square floor plan and six monitoring CCTV cameras for each cell. Some of these stark boxes are—or will be—occupied by nonconforming sex offenders whose crimes, according to the artist and curator, are defined as such only through social over-regimentation and benighted moralism.

In the main space, the circled panels—conceived as a panopticon in reverse—display various single figures (including an East Asian woman and a bearded white man in a blue dress) dancing vigorously. They recall the numerous netizens who, in 2018, protested an Iranian teenager’s arrest for posting Instagram videos of herself shimmying provocatively in her bedroom without a hijab. At times, the dancers’ movements are supplemented and then replaced by the kind of dynamic point-and-line diagrams used for analytic training in sports and professional dance—a technique that has lately been adapted to AI facial recognition.

Two of the smaller rooms contain a total of ten monitors, each devoted to fictional vignettes about different so-called sex criminals, from the Marquis de Sade to Michel Foucault (caught in a homosexual honey trap while serving as a cultural attaché in Warsaw in 1959) to contemporary African women accused of harvesting sperm in order to sell it on the black-magic market. Cheang’s unbounded approach to sexual identity extends to space-time itself, prompting such cross-video encounters as Casanova (an early advocate of condoms, played here by a gender-fluid Taiwanese performer) meeting with a present-day HIV-positive young man who was jailed in Taiwan for failing to reveal his health status to multiple chemsex partners.

The fourth room features a large clear-plastic cube housing all the electronic equipment used to make the installation run. This transparency, both physical and metaphoric, highlights the dualistic, self-contradictory nature of Cheang’s subject. The technology that seems to free us also subjects us to ubiquitous surveillance. A disclaimer at the entrance informs potential “3X3X6” visitors that their image will be digitally captured and distorted beyond recognition for use in the show (apparently as background on the vertical panels). One can even remotely submit a still or video selfie for inclusion. Reading the notice, some people stop dead and turn away.

There is certainly much to take issue with in the Taiwan pavilion. The work is premised on a trendy historical myth purporting that strict gender identification and detailed bodily monitoring are by-products of the Enlightenment. (Really? Read the Book of Leviticus lately?) It also goes to such extremes as treating Armin Meiwes, the online-soliciting cannibal, as one of our era’s misunderstood and repressed. But “3X3X6” unquestionably raises issues of vital current debate and presents them in formally compelling fashion. Not so all the Biennale’s other Chinese regional entries.

Shirley Tse, the first woman ever to represent Hong Kong, offers a dozen or so objects—a radio antenna, a sculptural head—on high metal stands that force one to “negotiate the space” of the courtyard (i.e., walk around minor obstacles) along with, in the interior galleries, a meandering, waist-high latticework reminiscent of an old-time children’s dowel-construction set. These spatial ploys and disparate stuck-together parts (wood, plastic, metal, fabric) are intended to evoke the heterogeneity of contemporary life in general and the international trading history of Hong Kong in particular. The artist, born and raised in Hong Kong but long resident in Los Angeles, where she has taught at CalArts since 2001, does not hesitate to signal her can’t-we-all-just-get-along intentions through titles. The exhibition as a whole, organized by independent curator Angela Li, is called “Stakeholders”; the courtyard piece, based in part on Tse’s girlhood memories of playing badminton in the streets of Hong Kong with pieces of furniture and bits of debris as court markers, is Playcourt, and the construct of mismatched segments and improvised connectors is Negotiated Differences.

In the Macao space, Heidi Lau, now New York–based, presents rough-textured iridescent ceramics meant to preserve cultural memories of a time before the tiny administrative region became the world’s largest and most garish site of legal gambling. Mountains, hermit dwellings, old cities, vessels, palm leaf fans, ghosts, boats, and traditional zigzag bridges all appear in “Apparition,” curated by Sio Man Lam. They represent one almost vanished psychic pole of a place once known as the City in the Name of God, whose 600,000 current residents are now overwhelmed by 30 million annual visitors drawn by gargantuan casinos and Las Vegas-style simulacra of the Eiffel Tower and other Western tourist sites.

Mainland China, for political reasons, has the only official Chinese pavilion in Venice: all the others are “collateral exhibitions.” This year, the selection, curated by Wu Hongliang, vice president and museum director at the Beijing Fine Art Academy, is artistically respectable but anodyne, falling somewhere between earlier appearances of art by the post-Mao avant-garde and the country’s 2017 presentation of ink art, embroidery, paper-cutting, and shadow puppetry. In a sleek, slightly over-designed installation that includes photographic portraits and full wall-text biographies of the artists, four participants, all born between 1963 and 1983, are given ample space for their work. The most conservative is Chen Qi’s undulant wall of woodblock print waves resembling a Vija Celmins at immersive scale. In Geng Xue’s video, shown on a wall and in various floor pods, a black-and-white world of clay figures is displaced by one ideal free-floating golden male figure, echoing the artist’s experience of pregnancy. In a room with pink carpeting covering the floor and mounting partway up the walls in places, He Xiangyu displays abstract sculptures that translate internal bodily sensations, such as touching his tongue to a tooth. The most adventuresome works are Fei Jun’s digital wall projections, one directly capturing visitor images, the other an animation showing flat platforms drifting along boatlike, piled high with stock elements—trees, fire hydrants, traffic cones, etc.—chosen by interactive game participants. Curator Wu’s express purpose in all this is to relate the Biennale’s much disputed theme, “May You Live in Interesting Times” (an expression long misidentified in the West as a Chinese curse), to a more traditional Chinese notion of social harmony and wisdom.