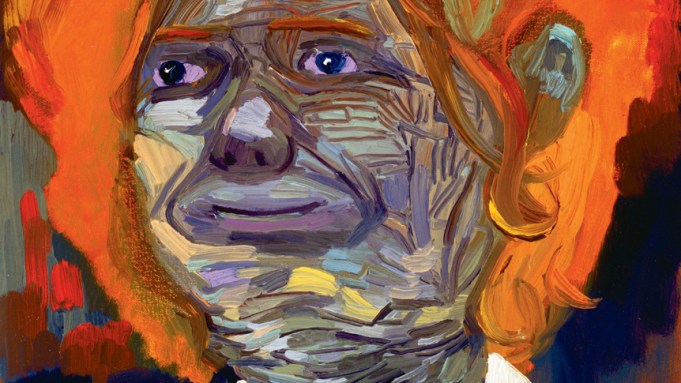 Dana Schutz’s breakthrough painting series of 2002, “Frank from Observation,” jarred the art world at the turn of the new century. These dozen canvases, revolving around the fictional character “Frank, the last man on Earth,” delivered a fresh retort to the conventions of portraiture, the nude and history painting. Reclining Nude (2002), with its pink-skinned naked man lounging on a yellow beach, seems an irreverent terminus to the heritage of the odalisque. Frank as a Probiscis Monkey (2002) cheerfully distorts its protagonist’s facial features and sets him against a backdrop of tropical vegetation, as if proposing a deformed Last Man in a Darwinian endgame. Drawing her raw materials from science, history, fiction and popular culture, and using a high-keyed palette and energetic brushwork, Schutz creates paintings of great impact. Her unsettling imagery and dark scenarios feel at once primordial and very much of the moment.

Frank is Schutz’s comical marionette. In the absurdist theater of her art, the artist lurks offstage, her ambiguous relationship to Frank investing him—and the paintings—with pathos and self-reflexivity. Like the American painters Lisa Yuskavage, John Currin and Nicole Eisenman before her, Schutz (b. 1976) hybridizes pop-cultural stereotypes and the canon of Western and modernist art history. She may also be seen in relation to her immediate peers, who, working in diverse mediums, have used eccentric narrative as a generative force in their art. One thinks of the mixed-medium video installations of Mika Rottenberg (b. 1976) and Ryan Trecartin (b. 1981), with their sensory overload and hermetic self-referentiality, and the meta-modernist designs of Mai-Thu Perret (b. 1976) and Mika Tajima (b. 1975). All are artists who were weaned on postmodernist appropriation yet search for a more empathetic connection to image-making. Schutz’s paintings were among the first expressions of a burgeoning trend shifting representation from a normative system based on hierarchies of meaning to a personal network sourced in the vast sea of images available online.

Recognizing Schutz’s inventive first decade, the Neuberger Museum of Art in Purchase, N.Y., recently granted her the Roy R. Neuberger Exhibition Award, given to an artist to mount an early career exhibition with an accompanying catalogue. “Dana Schutz: If the Face Had Wheels” opened at the Neuberger on Sept. 25 and travels to Miami and Denver in 2012. Curator Helaine Posner worked closely with the artist, selecting around 30 paintings created between 2001 and 2010. Having left her longtime dealer Zach Feuer last summer, Schutz will have her first solo show at Friedrich Petzel Gallery in New York in May. As time has passed, Schutz has increasingly situated herself in the forefront of experimental painting, combining the semantics of figuration and illusionistic space with abstract pattern and gesture. Her tone has become more subdued and introspective, in a departure from the provocative pictures that first brought her fame.

Schutz was born in Livonia, Mich., a Detroit suburb. She started to paint seriously at age 15, and went to the Cleveland Institute of Art for her BFA. She earned an MFA in 2002 from Columbia University, where she began to invent hypothetical characters and far-fetched scenarios, and to work in series. After “Frank from Observation,” Schutz devised the “Self Eaters” (2003-04), depicting lusciously painted creatures performing acts of auto-cannibalism. These are fantasies worthy of a Hollywood treatment. One being munches on its hands as if on spare ribs. Another savors its eyeball like a juicy peach. A third manages to gets its mouth around its own head, eyes peering through pointy teeth. In those eyes is a twinkle, as if the creature took pride in its accomplishment.

These works are an apt metaphor for the creative process of the artist, and involve a fascination with taboo, the languages of painting and the cycles of nature. The “Self Eaters” have a rich cultural ancestry, from the golem of Jewish folklore and Mary Shelley’s Frankenstein to Japanese kaiju (strange monsters, most famously Godzilla), which embody fears and anxieties but also suggest liberation from those very constraints. Against all norms and logic, Schutz’s characters accomplish their gruesome acts with a kind of defiance. Schutz went on to create anti-celebrity portraits, such as The Autopsy of Michael Jackson (2005), and a series focusing on single-minded “fanatics.” Among the latter is Gravity Fanatic (2005), portraying a woman—and her numerous gadgets—elaborately taped to the ground. In a similar vein of magnified monomania, “How We Would . . .” (2007) is a series of paintings that depicts common human behaviors as they might transpire in a distant future.

Rare among her contemporaries, Schutz also satirizes the cronyism of the Bush administration and American capitalism, in works like Party (2004) and Men’s Retreat (2005). Here she lambasts the contemporary abuse of power, couching its emotional and physical costs in the ambitious language of history painting, with a visceral twist. Presentation (2005), for example, condenses the anger and sense of powerlessness that gripped the American left after 9/11, and following the invasions of Afghanistan and Iraq, and the Abu Ghraib scandal. The 14-foot-wide canvas features a naked giant laid out on a board above a gaping grave, his stomach opened to a witnessing crowd. The painting, at a scale rivaling the carnivalesque satires of Ensor, and surpassing Eakins’s Gross Clinic, commanded critical attention at the “Greater New York” exhibition at P.S. 1, where it premiered. (The painting was subsequently acquired by New York’s Museum of Modern Art.)

Eventually, Schutz settled into a track of earnest exploration, expanding her range and subject matter beyond instantly iconic characters like Frank or the Self Eaters. Free associating—working with verbs, Google searches, and puns—provides her with subject matter. The “I’m Into . . . ” series of 2008 resulted from her selection of search results of that phrase. I’m Into Shooting in Natural Environments (2008) puns on the word “shooting.” It depicts a blindfolded man seated among decorated wall panels that partially separate him from an arid desert landscape. An abstract painting leans against one wall and a painting of the PBS logo stands on an easel. Yet the trappings of highbrow liberalism offer no protection, as a shrouded hunter points a rifle at the man’s head through a hole in the wall.

Sometimes Schutz drops narrative altogether. Singed Picnic (2008) and Gouged Girl (2008) offer somewhat bloodless depictions of objects and people representing a warped bourgeois sensibility, merging aspects of Manet and Dalí. Anonymous people missing large portions of their bodies, as if they were burned or carved away, are arranged on blankets—as much still life as figural tableau. In Gouged Girl, the pink flesh of a halved watermelon echoes the figure’s pink insides, as if she, too, were a piece of fruit, pared. Singed Picnic, Schutz’s representation of revelers with a quarter of their volumes scorched away, does not feel so much alarmist or postapocalyptic as parodic, a send-up of art’s illusions of transcendence.

Faces, which can convey individuality, are rarely recognizable or even visible in Schutz’s recent work. Identities are absent and bodies are often seen in fragments. Ants In Hand (2009) is a close-up of numerous tiny black dots scurrying across a fat pink mitt of a hand. Carpenter (2010) shows some dentures with three enormous beaverlike teeth shaving the planks of a wooden floor. A figure presses its large face into the front plane of Talk, Talk (2010). Eyes wide open, it snips its own eyelashes with scissors while chatting on the phone. Some of these works fall within what Schutz calls “Tourette’s Paintings,” named for the syndrome characterized by involuntary movements and utterances. She adopted Tourette’s as a trope for the spontaneous production of images, much as Jonathan Lethem used his character Lionel Essrog’s tics as a cultural metaphor in the novel Motherless Brooklyn (2000).

Drawing and printmaking have assumed a larger role in Schutz’s practice in recent years. Previously, she drew mainly as a means to work out challenging compositions, or to create preliminary sketches for her characters and narratives. Some of her more recent ink drawings instead revisit finished paintings; in them she dispenses with color to explore linearity. Among the dozen works on paper in the Neuberger show, the earliest, Untitled (dead guy), 2003, is a murky image of a man flattened beneath four massive slabs, perhaps from a fallen concrete wall. Stylistically, it suggests the Cubist-inspired figuration of Orozco or Siqueiros, the subject a humanistic cry against the dangers faced by the common man. In four works (all 2004) related to the “Self Eaters,” gouache stains in black and gray give the compositions a painterliness and a degree of depth, as well as a resemblance to photographic negatives. A number of portraits and heads in gouache have more delicate shading and a cursory line, creating a sense of intimacy and lack of mediation. But distortion remains. The cross-eyed woman in Untitled (Essey), 2005, could have been lifted straight from a sketchbook by John Graham (1886-1961).

Some recent drawings, primarily ink with occasional black and gray fill and shade in gouache, offer the chance to compare drawings and paintings of the same subject. For example, the ink drawing Swim, Smoke, Cry #2 (2010) is based on a painting created the year before, titled Swimming, Smoking, Crying, which depicts the raised arm and colossal head of a swimmer turned to the side, facing the viewer. In defiance of all logic, the mouth, wide open, is below the waterline, gasping for air and dangling a lit cigarette. The limpid eye, triangularly shaped and shedding a giant tear, stares out at the viewer. The substitution in the drawing of calligraphic squiggles for lustrous blue water draws attention to the cigarette, the only geometric shape among the swirls. The title of the painting describes three simple actions difficult for a single person to perform at once, and is perhaps an homage to Philip Guston’s celebrated, angsty self-portrait Painting, Smoking, Eating (1973). Indeed, we see much of Guston in Schutz: outsize heads; prostrate bodies; viscous, colorful painting; anthropomorphic objects and furnishings; depleted landscapes. Self-Portrait as a Pachyderm (2005), akin to Guston’s hooded self-portraits, shows Schutz in a caustic mode. She has often stated her interest in Guston (and Kafka), in their interweaving of irony and allegory.

Schutz’s alignment with a feminist politics of painting since the 1960s is especially apparent in the selection made for this show. (She was the youngest artist featured in After the Revolution: Women Who Transformed Contemporary Art, a 2007 book co-authored by Posner.) From the gush of snot blasting from a woman’s piglike nose in the earliest work on view, Sneeze (2001), to the yellow streams of urine rushing to the floor in Shaking, Cooking, Peeing (2009), Schutz’s representation of women’s bodies and experiences crosses polite boundaries. Transgressive female rock musicians, too, are extolled in the paintings: in The Breeders (2002), the cartoonishly rendered Deal sisters (leaders of the titular rock band) emerge from Frank’s chopped-up body parts, and Her Arms (2003) is a full-length portrait of post-punk icon Kim Gordon. How We Would Give Birth (2007), from the “How We Would . . . ” series, at once adduces the current popularity of “natural” childbirth and critiques the eternal association of women’s bodies with landscape and nature.

In skewering traditions of painting and representation, Schutz deploys an exhilarating mixture of humor and indignation, optimism and pessimism. It seems an effective tactic in rethinking painting in the new era. Yet Schutz also forces the viewer to react, to take a position; there is always something at stake in her work. For all her formal brilliance, it is Schutz’s ethical probing, her lucid parsing of contemporary culture, that truly animates her art.

Currently On View “Dana Schutz: If the Face Had Wheels,” at the Neuberger Museum of Art, Purchase, N.Y., through Dec. 18.