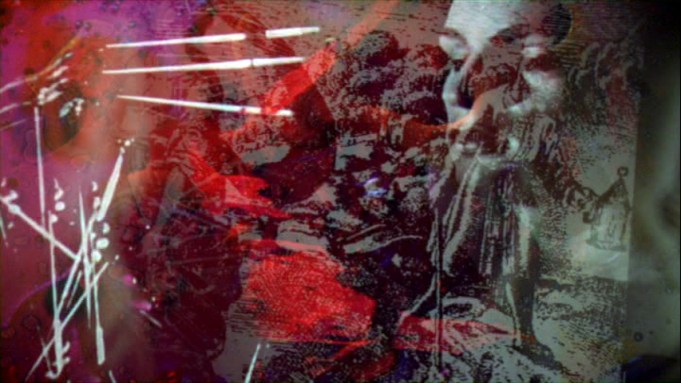 Regardless whether there was something in the water at the Broad Art Center at UCLA: watching Single Wing Turquoise Bird Experimental Digital Art’s “Light Show,” on Jan. 26, was a trip. The “Light Show,” an oozing, swirling bottomless fall into layers of transforming colored forms and images, also boasted a top-notch band, which would have been well worth listening to on its own, as it comfortably shifted between acid rock, jazz and R&B in tandem with the projections. The “Light Show” is one of the performance offerings sponsored by the Getty Museumand LA>

Single Wing Turquoise Bird (SWTB), during its heyday from 1967 to 1975, mastered the visual projections for the LA concerts of the biggest names in rock—The Velvet Underground, Sly and the Family Stone, Pink Floyd, The Who and The Grateful Dead. SWTB also worked with highbrow experimental composers Steve Reich, Terry Riley, La Monte Young, Pauline Oliveros and John Cage.

Before a packed crowd of about 150, eight technicians, five of whom were part of the original SWTB collective, operated a phenomenal array of technologies old and new. Two rows of equipment on tables at the back of the room were piled high with overhead, slide and video projectors, as well as computers, at busy workstations. SWTB’s technique involves layering their projections live, while a constant flow of other images launch on screen.

While the audience watched this dense onslaught of photographs, film, 18th-century engravings and colored liquids, the band kept one eye on a video monitor on stage as it played. A dog ran across the screen. East Asian dancers pranced. Spirals twirled. Writing seemingly rewrote itself in different illegible letters and changing colors. Still photographs moved about. A forest materialized. A platinum blonde smiled. Chandeliers loomed. Onion-domed church towers multiplied. Mandalas swirled around an image of the Buddha. Dr. Frankenstein in his laboratory brought the monster (and then the monster’s bride) to life. The pages of a burned book turned. People floated, fled and flew. Egyptian statuary rose up. A silent-film Venus in a flying star winked and waved. All kinds of diagrams—geometric, biologic and Gothic architectural—flickered by. A Renaissance Madonna, a medieval knight, a group of suited 1920s men, and Hindu gods replaced one another. A hand threw down photographs that sometimes turned into video frames within the frame of the overall projection.

None of these bits held the screen on its own. Rather, each was part of a thick agglomeration of imagery triggering subjective associations and dreams about the dreams on the screen, from which the audience would awaken to find itself down the rabbit hole again. While an instruction in the program warned those medically sensitive to the strobe lighting to turn away to prevent seizures, nothing forewarned the audience about the inevitable feeling of surrender to this acid trip without chemical inducement. Thank goodness it wasn’t in 3-D!

A lot of the imagery was historical or period pieces, like the antique engravings or the snatches of silent film, giving the feeling that this was a trip back in time or into a kind of synchronic present. The music ebbed and flowed with the waves of pictures and colored liquids, sometimes seemingly narrative, at other times almost nightmarish. The art crowd and some presumably ex-Hippie fans from back in the day rubbed shoulders with students, who on cue rose wearing identical white T-shirts to dance, but here the time gap opened up. The 1960s also seemed far away when a computer briefly malfunctioned and the Netflix icon and other menu items displayed.