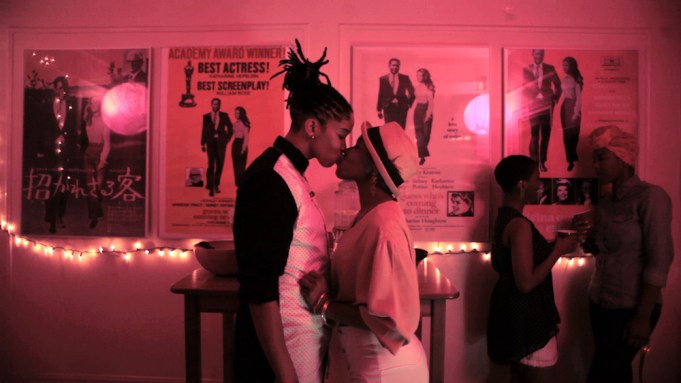 The Black Queer Brooklyn on Film series, which runs every Thursday in June at the Brooklyn Museum, illuminates the active legacy of artists featured in “We Wanted a Revolution: Black Radical Women, 1965–85,” an exhibition currently on view at the museum about artists involved in anti-racist and feminist activist movements. Lauren Argentina Zelaya, assistant curator of public programs, has selected films committed to the ongoing work of the Combahee River Collective, whose 1977 Black Feminist Statement, excerpted in a wall text in the exhibition, promises to struggle “against racial, sexual, heterosexual, and class oppression,” by using “integrative analysis” on these combined systems of oppression. The sixteen films of the program run nearly three hours long with scenes that shift dramatically from a party for the polyamorous to Zambian exiles performing weightlessness training during the 1960s Space Race.

Six of the films are by members of the New Negress Film Society, a collective of black women filmmakers who organize spaces for screening and mutual support. Ja’Tovia Gary’s An Ecstatic Experience (2015) begins with the sound of Alice Coltrane’s harp as 1950s-era churchgoers arrive for a service. Gary then layers animated drawings over actress Ruby Dee performing the slave narrative of Fannie Moore, whose story was recorded in 1937 as part of the Federal Writers’ Project. Gary’s hand-drawn animations create honorifics: a halo over Dee’s head alternates with orbital and dot formations, giving way to laser beams dancing in diagonals from Dee’s eyes. And just as viewers acclimate to the sound of celluloid crackling in Gary’s collage of black-and-white found footage, she cuts to color videos of militarized police forces and the rebellions fighting back, taken from network news and citizen journalism covering Black Lives Matter protests in cities like Ferguson and Baltimore. Gary’s shifting contexts of print film and digital video recall the vitrines in “We Wanted a Revolution,” containing ephemera related to the lives and work of the forty-plus artists in the show. Artists’ collectives and alliances—such as the literary magazine Conditions, Where We At in Brooklyn, and the filmmakers of the L.A. Rebellion—organized shows, festivals, newsletters, magazines, panels, to sustain support networks while fighting the systemic white supremacy of art institutions. The show pays attention to how groups of artists worked together, just as An Ecstatic Experience bridges scenes of black communities organizing across centuries, in churches, theaters, and in the streets.

Making history alive in the present, the works in Black Queer Brooklyn on Film treat the documentary idiom as malleable, bending it to incorporate fictional narratives and performance art. Tiona Nekkia McClodden’s KILO | Iba se 99 (2015) confronts the gaps in a 1945 report produced by the Department of Labor on the first twelve black women to enter the Brooklyn Navy Yard’s workforce. Set against humming car alarms and dripping spray paint of the present-day Navy Yard, McClodden’s camera follows performer Ash Tai as she carries out rituals to honor the black women, who are unnamed in the government’s report. In one shot, Tai wields a screwdriver to disassemble the lens from a set of binoculars. She handles the inner piece as if trying to commune with assembly line materials before they were united in a tool. A bare lens from the binoculars offers a view through a diamond-shaped window of plywood scaffolding and a reflection of Tai’s ceremonious gaze.

D’hana Perry’s Loose (2012–), the most durational and nonlinear work in the series, explores improvisational techniques in documenting the lived experiences of trans and non-binary people of color. Self-portraits and informal snippets of conversations between Perry and their subjects liquefy into a kaleidoscopic array of squiggles as the dialogue is similarly distorted by a vocoder. A meditation on the experience of race and gender gives way to close-ups on eyes that multiply in a hall of mirrors. Perry’s soundscape recalls the noises of a dial-up modem with a beat that people can dance to, growing in volume at times to drown out the interviewees’ speeches. Loose is the only ongoing project in the program at the Brooklyn Museum; Perry has performed Loose as audio-visual DJ sets in venues ranging from the Spectrum, a now-closed underground Brooklyn queer club, to a panel trying to define “trans art” at Harvard University’s Mahindra Humanities Center.

Lindsay Catherine Harris’s Evoking the Mulatto: It’s Not a Cool Word (2015) also invests in the liminal space of identity, when one inhabits both sides of supposed binaries, but Harris uses more traditional tropes of talking heads against a bright orange studio backdrop. Like Perry, Harris appears in front of the camera, sharing the role of subject with her interviewees. These documentarians build trust with their participants, treating biography as a conduit for social research. Harris edits her interviews about the complexities of identifying as black and mixed race to include lingering pauses or wide smiles, highlighting the wordless connective tissue of conversation.

Through its pairing with “We Wanted a Revolution,” Black Queer Brooklyn on Film offers a powerful reminder that in addition to learning from artists working now, one form of resistance against regimes of violence is to build off the many inheritances of black women artists. Three of Julie Dash’s short films have been transferred to video and play on a flat-screen monitor in the exhibition, with headphones and a bench for those willing to sit for an hour. The character Mignon Dupree of Illusions (1982) is a white-passing black woman in Los Angeles in 1942 who works at a film studio, where she oversees the production of a schlocky holiday movie. In one scene, a rich white woman sings about love (at times stroking rose petals on her face), dubbed with the voice of Esther Jeeter, a black singer who frequently worked in Hollywood. McClodden’s film about the Navy Yard workers refers to the same period as Dash’s Illusions, and both films do the intimate work of building dialogue with black women who changed white, male-dominated industries, while asserting the importance of that work. As Dupree proclaims at the end of Illusions, “The influence of the screen cannot be underestimated.”

‘House of the Dragon’ Recap: Meet the New Bosses