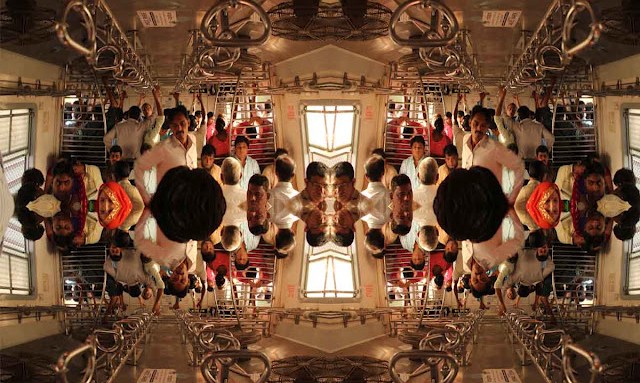 The inaugural United Art Fair (UAF), which took place Sept 27-30 at the Pragati Maidan convention hall in New Delhi, aimed to promote emerging and lesser-known artists. The event showcased some 2,000 works of art by 520 artists. In keeping with current display trends, the fair looked like a group show, with artists selected for inclusion by a curator.  In contrast to the formerly known India Art Summit established in 2008, now India Art Fair, UAF solicited the artists, not the galleries.

1. Chintan Upadhyay sited four giant baby heads in the Sculpture Park. Their gentle, fiberglass faces were bathed in a deep, shiny crimson. Upadhyay claims that the babies embody his alter egos, each capturing a mindset with unique characteristics.

4. Jagmohan Bangani showcased a few of his lush, Hindi-calligraphic oil paintings that verge on pure abstraction. His process includes laying down pigment and white lettering on canvas. In the 2012 work Geeta Updesh, intensely rendered marks eventually accumulate into illegibility.

5. Tathi Premchand presented five works from two recent series, small digital prints of mirrored dreamlike images titled The Indian Dhobi Ghat—3 and Chip Hanger Body—1. These works featured subjects and clothing from the lowest caste-critiquing Indian culture, religion and poverty. Premchand told A.i.A., “viewers feel my work looks like a mandala or kaleidoscope; you can see these same things in Buddhist and Hindu temples in the form of murals and divinity paintings.”

6. UAF featured a substantial selection of graphic figuration, with several emerging painters emphasizing vague symbolic narratives. One of the more interesting examples was by Karan Uppal, who exhibited a large-scale painting of a mother goat and her nursing young. Their cream-colored, mannerist, caricatured bodiesdepict eating in a comical manner.

7. Painter Sanjay Sundram exhibited a medium-size 2012 watercolor, The Ruins of Nathupur. Depicting a cityscape overrun by jungle greenery, birds and monkeys, the painting suggests a pervasive barrier separating nature and industry. The unpretentious delivery was refreshing.

The 2024 Range Rover Velar in Photos

The Thrilling Rise of Ben Aldridge

Navarrete vs. Wilson Livestream: How to Watch the Championship Boxing Fight Online