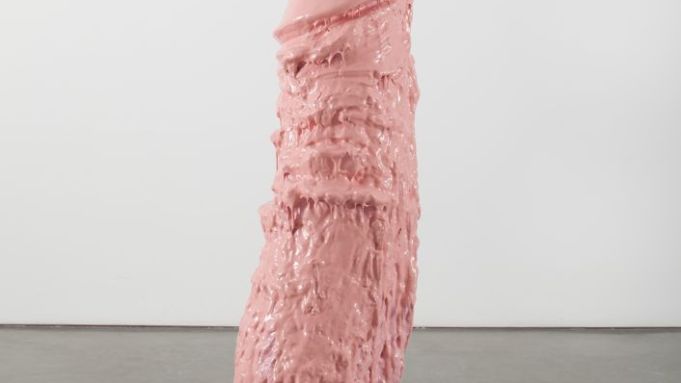 “I’m an artist first—but I like to have other people’s art around me,” says New York-based Swiss artist Ugo Rondinone. He’s organized a group exhibition, “The Spirit Level,” on view through Apr. 21 at both of Gladstone Gallery’s Chelsea locations. The show, which features 19 artists, makes dramatic pairings of artists who have worked in different time periods and mediums but share a similar purview. “They are more isolated than socially engaged, as artists,” says Rondinone. “Their work would exist without the public—it’s not the public that completes the work.”

Colorful, functionless mats from Latifa Echakhch’s “Frame” series (2000–2008) are the first things one encounters at the 24th St. space. Each “Frame” is a prayer rug, from which Echakhch removes the woven center, leaving only the fringed edges. Paired with these are works from Ann Craven’s ongoing series of paintings of the moon. The pairing is feminine in tone, and Rondinone explained that the interplay of feminine and masculine is one of the guiding principles of the show.

In an adjoining room is a pair of Klara Liden’s “Poster Paintings” (2008), which complement a series of floor sculptures by Sarah Lucas. To create these works, Liden removes thick rectangular blocks of poster sediment from urban walls. She coats the surfaces with white paint, creating an almost blank canvas that is nonetheless pregnant with history. Lucas’s graphically phallic hot pink works from her “Penetralia” series (2008) contrast with Liden’s quiet paintings.

The show also features metallic-glazed ceramic vessels (“Untitled Series,” 2004) by Andrew Lord, which were made, in part, as a reinterpretation of Gauguin’s late-19th century stoneware. The works stand on wood pedestals that have been lightly whitewashed to reveal their wooden materiality at the base. (In another room, a series of reclining nudes by Hans Josephsohn lay upon such pedestals as well.) The gestural strokes applied to the pedestals seems to denote the act of painting, opening up questions about the relationships between the mediums presented in the show.

Accompanying Lord’s work is Jay DeFeo’s Seven Pillars of Wisdom (1989), eight enigmatic charcoal and metallic powder drawings that recall keyholes. “This was her last work before she died,” says Rondinone. It’s the first time the series is being shown in its entirety. DeFeo’s art practice can be seen as a near-perfect analogue to the underlying theme in the show: that of the spiritual life and practice of the artist, particularly in relationship to duration and solitude. DeFeo’s best-known painting The Rose (1958–66) took the artist eight years to complete and was stored unseen for 25 years at the San Francisco Art Institute before being shown at (and subsequently acquired by) the Whitney Museum in New York.

In the 21st St. space, Rondinone’s spiritual direction veers more toward the exuberantly iconic and totemic, beginning with a new untitled Joe Bradley painting featuring four large, black five-pointed stars. Bradley finds his psychic match in a decidedly extroverted series of wall sculptures by Al Hansen, which depict the Venus of Willendorf in various media—including the artist’s beloved cigarette butts (Bambolina, 1994). Kim Jones’s seminal Mudman (1974) seems to perform the duties of a resident shaman within the exhibition. The sculptural costume is composed of sticks and mud, with a net mask that covers the face of the wearer. The artist created the piece in part as a response to his experiences with childhood illness and the Vietnam War, and has worn it for sporadic performances since the ’70s. (Jones may don the piece for impromptu performances during the course of Rondinone’s show.)

Rondinone is known for his loquacious rainbow neon sculptures, including Hell, Yes! (2001), which until recently hung on the New Museum’s façade. Equally, his practice involves the production of sculpture that transforms commonplace materials into creatures possessed of an uncanny, childlike aura, such as the totemic aluminum sculptures from the “Moonrise” series (2007). These works, in their sweet solemnity, align very directly with the works in “The Spirit Level.” “All the pieces are very raw, basic and immediate,” says Rondinone. “Each of these artists I collect, so I’m surrounded by this art. I see them all as shrines, and they stimulate me in my daily life.”