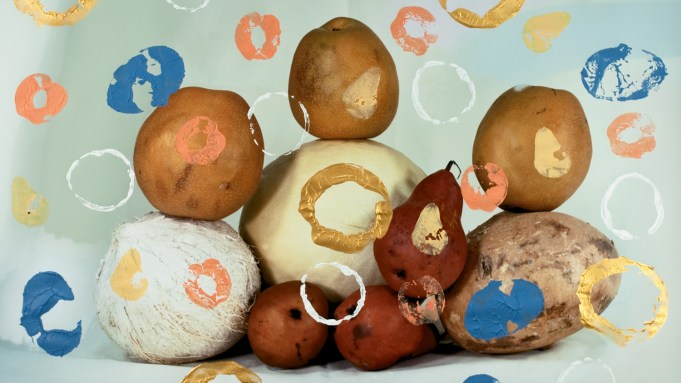 SAM FALLS FIRST ATTRACTED attention with a 2010 solo exhibition at New York’s Higher Pictures gallery, where he showed poster-size, brilliantly colored photographs that he had digitally transformed and then overpainted. Since then, in a rapid succession of shows in Europe and the U.S. (including a recent solo at American Contemporary gallery, New York), he has run through an extraordinary range of styles and methods spanning a number of mediums. Like many of his fellow artists born in the 1980s, Falls produces art that is at once wildly improvisational and relentlessly idea-driven: he worries less about the stylistic coherence of his output than the consistency of its creative logic. A savvy mash-up of photography, painting, drawing, com- puter rendering, video, printmaking, sculpture and more, his work is steeped in an artistically freewheeling sensibility that is one of the hallmarks of his generation.

“The idea of an artist working with one style doesn’t make any sense,” Falls said flatly when we spoke recently in New York. Repeated visits to the Metropolitan Museum during his student days taught him to regard ancient and modern art as existing in a seamless unity, and to imagine realism and abstraction as just different points along the same visual continuum. This kind of outlook helps Falls juggle a host of seemingly incompatible impulses in his work. Instead of feeling torn by contradiction, he sees no reason why he can’t keep an array of disparate elements perpetually in motion.

BORN IN 1984 in Southern California and raised in Vermont, Falls studied painting and drawing as an undergraduate at Reed College in Portland, Ore. He mastered the techniques of large-format photography while working in a commercial studio there during his undergraduate years, and completed an MFA in photography at the Bard/ ICP program in New York City. Even as Falls’s work has branched out into other medi- ums, the notion of “the photographic” has remained the conceptual motor for much of what he does. He explains that his work with various photographic pro- cesses has guided his thinking about the ways that the variables of light, space and time can be employed to shape an image.

Falls can still spend days in the studio staging a still life for the camera, and he continues to insist on the value of making everyday photographs that capture the living pulse of intimate emotion. Many of these casual, mood-filled images—equine portraits that reflect his mother’s love of horses, or deftly directed portraits of his friends—can be found scattered through the dozen or so art- ist’s books that he has published in the past four years.

It is his handling of luminous and ingeniously rendered color, however, that has become the real hallmark of Falls’s work. For the more elaborate pieces shown at Higher Pictures in 2010, he started with digital files of photographic images—portraits, landscapes and still lifes that were sometimes his own, and were sometimes taken from the Internet or scanned from publications. He then turned to Photoshop’s “wet media” tool to add surpris- ingly convincing digital approximations of swirling, color-drenched brushstrokes. After printing the digital images onto large sheets of archival paper, he used actual brushwork to apply further layers of viv- idly hued acrylic, pastel and watercolor.

These works, with their high-key, Pop-style color and fast-paced repartee between photographic and handmade imagery, seemed so uncannily attuned to the zeitgeist that Falls was invited by Dazed and Confused magazine to make a series of similarly overpainted photographs of pop-music star Bjoï¿½?rk for its August 2011 issue. He was also commissioned to produce a set of painterly quasi-fashion photographs for an Urban Outfitters lookbook. Both series sparked considerable comment in the online forums that monitor emerging trends in art and commercial illustration, and Falls might easily have capitalized on his new visibility simply by continuing in the same vein. By that point, however, his art was already moving in a quite different direction.

IN MID-2011, while traveling cross-country to relo- cate his studio from New York to Los Angeles, Falls stopped over in Taos to attend a workshop in natural coloring for fabrics, where he learned to make his own dyes. A few months later, he and New York art- ist N. Dash traveled to Joshua Tree, in California’s Mojave Desert, to carry out respective art projects as part of artist Andrea Zittel’s recurrent outdoor exhibition “High Desert Test Sites.” Drawn to the squat, abandoned sheds that he found scattered throughout the area, Falls decided to hang lengths of intensely colored, hand-dyed fabric in their windows and doorways. Then he photographed the buildings as they sat blankly under the desert sky. Later, he began work on the images digitally, inserting blocky geometric shapes in the same colors as the pictured fabrics. After making digital prints, he used a hand-roller to embellish the sky areas with swaths of enamel paint, again in colors keyed to the hues of the fabrics. The finished works wring an unexpected emotional note from the simple contrast of rich, ornamental color and dilapidated architectural forms.

When Falls exhibited these photographic works at M+B Fine Art in Los Angeles earlier this year, they were flanked by a group of low, zigzagging aluminum sculptures painted to match the hues of the original fabrics. The sculptures also allude to the idea of the changes wrought by passing time. Although uniformly monochrome in color, some of their painted metallic surfaces are finished with a UV-protec- tive coating to prevent them from fading when exposed to light; other surfaces have been left uncoated, so that the pigment will, in the course of time, slowly desaturate and ultimately vanish.

Falls has since taken the principle of exposing colored materials to light and other environmental forces and extended it in surprising directions. His aim, spelled out in a recent artist’s statement, is to create works that he describes as “formed over time, rather than captured in an instant.” To make his “Val Verde” wall hangings of 2011, for instance, he took swaths of hand-dyed muslin to a canyon in Val Verde, just north of Los Angeles, secured them to the ground, and set a long wooden plank in the center of each fabric sheet. Left out in the sun for four months, the exposed sections of muslin faded in irregular fashion, setting off the dark, mysteriously minimalist rectangles left where the plank had shielded the fabric.

Traveling again to Joshua Tree, Falls carried with him sheets of heavy-duty linen that he had hand-dyed in blues, pinks and blacks. He used the fabric to wrap small boulders that he found amid the rocky land- scape, and then left the bundles sitting on an isolated hillside for several months. Constant exposure to the sun and rain, and the absorption of ground salts, gradually bleached away portions of the linen; the blazing sunlight also “burned” the outline of the boulder into the fabric, leaving behind a ghostly circular shape. These “Fades” were shown last spring in a two-person show with N. Dash at TWIG Gallery in Brussels.

For a recent group of works made outdoors in L.A.’s Topanga Canyon, Falls set out a number of pieces of white terry cloth and carefully placed a row of cut firewood on each. After sprinkling the wood with powdered pigments, he let the sun and rain complete the process. Falling rain- drops splashed the pigments in pris- matic patterns which, in the finished works, seem to dance around the pure white rectangles left where the wood had protected the fabric.

During the past year, Falls’s output has been remarkably fast-paced and varied. Aside from the works just mentioned, he has also produced a group of pulsatingly psychedelic “painted photograms” that adroitly combine airbrushed acrylic paint and abstract photographic passages; rainbow-hued pastel rubbings of his studio floor; ripped-paper drawings that were later scanned and used to generate torn-edged metal sculp- tures; and still-life photographs of fruit arrangements that he covered with lively block-print patterns made by inking the split halves of the fruits themselves. Falls told me that he is so prolific because he has an inquisitive nature, and because he now allows himself to produce new works quickly in response to the artistic questions constantly arising in his mind. It’s this attitude, which is yielding a stream of visually inventive artworks, that makes Falls one of the most exciting young artists on the scene today.

CHRISTOPER PHILLIPS is a curator at the International Center of Photography in New York City. See Contributors page.