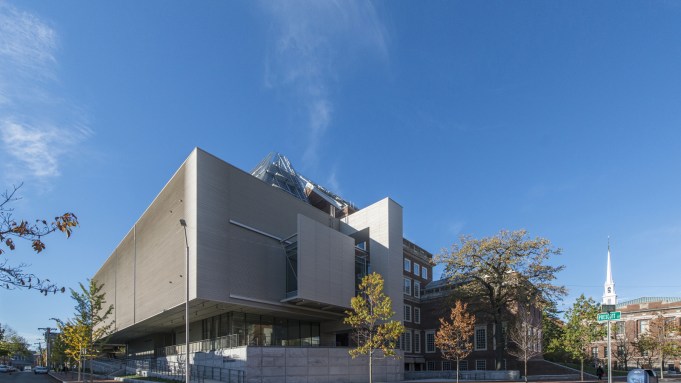 The museums’ combined holdings of nearly 250,000 works boast, among many highlights, one of the finest collections of Pre-Raphaelite paintings in the United States, the largest selection of David Smith’s work outside the artist’s estate, strong examples of Dutch 17th-century and French Impressionist paintings, and deep reserves of works on paper, including Fluxus editions and Josef Beuys multiples.

In galleries installed by Kulapat Yantrasast’s architecture and design firm wHY under the leadership of the Harvard curatorial team, works of art in all mediums appear together. Western collections can now be seen side-by-side with, for example, masterpieces of Middle Eastern book arts like the exquisite 16th-century Persian manuscript of Divan of Hafiz, Chinese paintings that date from antiquity to the present and art objects from the length of the Silk Road. It’s a dense hang, but it’s done with erudition and evident pleasure.

The new museum, a largely concrete-and-glass extension rising up and behind the original Fogg Museum, which was erected on its current Quincy Street site in 1927, is the second Renzo Piano museum expansion in Boston in three years. The architect also recently oversaw an addition to the Isabella Stewart Gardner Museum. Among Piano’s other recent museum projects are additions to the Art Institute of Chicago and the Morgan Library. His entirely new Whitney Museum of American Art, in Manhattan’s Meatpacking District, is scheduled to open next year.

The inaugural exhibitions include “Mark Rothko’s Harvard Murals” (through July 26, 2015), which presents the original five canvases commissioned in 1962 for a penthouse dining room at the university, one of only three site-specific installations created by the artist. The paintings were severely light-damaged by excessive sun and were removed to storage by the late 1970s. They are now presented under projected colored lights to compensate for the effect of the lost pigment.

“Rebecca Horn: Work in Progress” (through May 10, 2015) features recent acquisitions and gifts of the German artist to the museum along with a two-story site specific commission, Flying Books under Black Rain Painting (2014), one of the artist’s painting machines. The work consists of a funnel, a mechanical arm and spray gun that sent a spatter of black ink across a two-story wall. Ink no longer flying, Horn’s piece faces an equally expansive installation of Ai Weiwei’s 258 FAKE (2014), made up of thousands of the artist’s photographs of his work and life, displayed on 12 monitors.

Piano asserted at a press conference that the museum’s architecture, with sightlines from the central piazza out onto the city, embraces the urban life around it. The opening exhibitions, including world-famous artists like Ai Weiwei along with Mark Rothko, much in the news in recent years as his auction prices skyrocket, aim to attract the broadest art public. Study rooms are also available, where all comers can make appointments to view works from the collections. Of course, the museum serves the university constituency, with a 1,000-square-foot gallery devoted to exhibitions timed to complement Harvard courses.

At the press conference, Piano, stressing the university’s civic role, called the museum “an invitation to those who love art and to all those who will.” Harvard president Drew Gilpin Faust expressed the hope that the museum will serve as a place to train all those who will “imagine new futures,” whether affiliated with the university or not. It is also an invigorating space to view a remarkable collection.