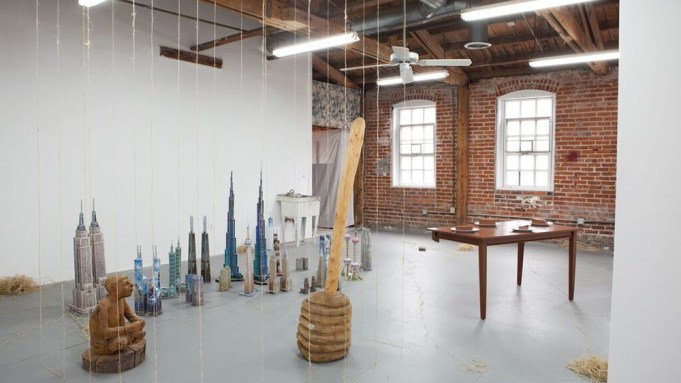 In 2016 we launched the Robert Rauschenberg Foundation/Art in America Arts Writing Fellowships, a joint project designed to foster art and culture writing in cities throughout the US. For our December issue, fellowship recipient Victoria Camblin wrote on the work of architect and real estate developer John Portman as a touchstone that artists react to as they intervene in Atlanta’s urban sprawl. Here Camblin reflects on the most important cultural events in Georgia last year.

Eddie Owens Martin (1908–86), an artist from Marion County, Georgia, took on the name St. EOM when he began to have visions in which three “people of the future” came to him from a place called Pasaquan. The visitors told him to use art to share and depict their peaceful lifestyle. St. EOM followed their orders, and in 1955 began to make his own Pasaquan. By the end of his life he had built a seven-acre art environment incorporating six buildings with vibrantly painted exteriors, connected by equally colorful concrete walls and inhabited by thousands of St. EOM’s works. In 2014, the Kohler Foundation agreed to assist the Pasaquan Preservation Society in restoring the site to its original glory, and the stunning, newly conserved Pasaquan opened in October. Pasaquan is now managed and programmed by Columbus State University under the direction of professor Mike McFalls of the university’s department of art.

This traveling survey of Ronald Lockett’s work—and the first-ever solo presentation of it—is a moving selection of assemblages, paintings, and sculptures, many of which explore the artist’s “fever within”: his HIV diagnosis, complications from which led to his death in 1998. Other works on view address life in the American South, and relate it to global human traumas, injustices, and struggles, using industrial materials such as siding tin, found roofing, sealing compounds, and nails to embody the roughness and isolation of the human condition. Lockett was raised in Alabama, in the same community of steel workers and their families that produced self-taught artist Thornton Dial Sr., Lockett’s cousin. “Fever Within” is stirring as a historical document of the unfulfilled promises of the late twentieth century, post-civil rights movement South. It also feels relevant to the disappointments of 2016, or perhaps to any year.

“Fever Within” was one of several noteworthy posthumous exhibitions in Atlanta this year. In a group show titled simply “Ceramics,” Marcia Wood Gallery presented an exquisite selection of works by Donald Locke (1930–2010): glossy, furry, sexualized acorn-shapes, and large, arcane vessels drawn upon as though they were the interior walls of a modernist cave, some affixed with suggestive hair extensions. The powerful expressionistic works of Mildred Thompson (1936–2003)—an artist, educator, and one-time Art Papers editor—were presented at the SCAD Museum of Art (“Mildred Thompson: Resonance, Selected Works from the 1990s”), among other venues.

“Jill Frank: Nothing Ventured // Nothing Gained” at the Museum of Contemporary Art of Georgia, Sept. 23–Nov. 19.

This exhibition got its title from a tattoo inked across the chest of one of photographer Jill Frank’s subjects, who are often “spring breakers” or other twenty-somethings captured in revelry or post-party recovery. Frank’s exquisitely shot portraiture and mise-en-scenes record the codes and rituals of youth culture in the American southeast, but what they are really about is photography itself—a medium the works exalt through the precision and finesse of their technical execution. Frank’s large format photographs monumentalize make-out sessions, selfie moments, and Solo cups, building a compelling tension between the work’s ephemeral subject matter and its labor-intensive method of production.

The Atlanta Contemporary operates the Studio Artist Program, through which artists receive partially-subsidized studio space on the museum’s premises. Two of these artists, Erin Jane Nelson and Jason Benson (who formerly ran Important Projects in Oakland, California), occasionally convert their shared work area into Species, a gallery that focuses both on emerging artists and on the anthropological and environmental leitmotif of the Anthropocene. Linda Moncada and Saige Rowe’s “Is This a Love Connection” featured a melting ice sculpture that left blue-green marbled marks on the floor, alongside playful video and installation works exploring entropy and decay. Joel Dean’s “Powers of 7-8-9” paired rough wood sculpture with DIY miniature paper models of famous skyscrapers, monumentalizing archaic modes of production while dwarfing modern feats of engineering.

Kirstin Mitchell became known on the Atlanta art scene for her performances as “Kiki Blood,” an alter ego whose appearances resonated with feminist actionism and the American performance art of the 1960s and ’70s. Mitchell recently abandoned that moniker, and her work has taken a material turn, incorporating painting, installation, found objects, and assemblage that nonetheless retain the participatory, voyeuristic quality of her performance work—most likely owing to her use of tactile, unsettlingly inviting materials such as large, thin, powdery sheets of rubber. This winter, she occupied a storefront belonging to the downtown project space Eyedrum, using it as a studio to make and present new and recent work. The result was an evolving, impromptu exhibition experienced through one-on-one appointments and open studio receptions. Mitchell’s mutable installations were stylish but not polished, embracing the appealing crudeness of the space and reflecting the provisional chic of her process-oriented work.

In March, Nasty Cowboy—a conceptual gallery that lives mostly in spirit, and occasionally in the living room of artist Alessandra Hoshor—curated an evening of musical performance in the courtyard at the Atlanta Contemporary, part of the museum’s move to make its space available to new types of initiatives and events. Headlining this one was Abdu Ali, a Baltimore native who identifies his experimental, participatory rap as “unapologetically black and queer” as well as “life-affirming,” and cites Afrofuturism, noise rap, and post-apocalyptic aesthetics as influences. Ali’s performance resonated strongly with its audience of emerging Atlanta artists—a community deeply engaged in discussions of race and sexuality, identity and politics. Fortunately, Ali returned to Atlanta during the annual, city-funded Elevate arts festival, during which he took the stage at Mammal Gallery and once again implored the late night crowd to join him in his cry: “I’M ALIVE!”

It should also be mentioned that in 2016, Prince gave his last-ever concert at the historic Fox Theater, Young Thug rode a horse around town to promote his “Hy!£UN35” tour, and the Atlanta Department of Watershed Management officially named its new $11.6 million,  four-hundred-foot long tunnel boring drill “Driller Mike,” after the politically engaged Atlanta rapper Killer Mike. The single most culturally impactful event of the year, however, has to be Donald Glover’s “Atlanta,” an FX comedy series about young artists trying to make it in the rap scene—and an urgent, naturalistic study of race, identity politics, and contemporary American culture.