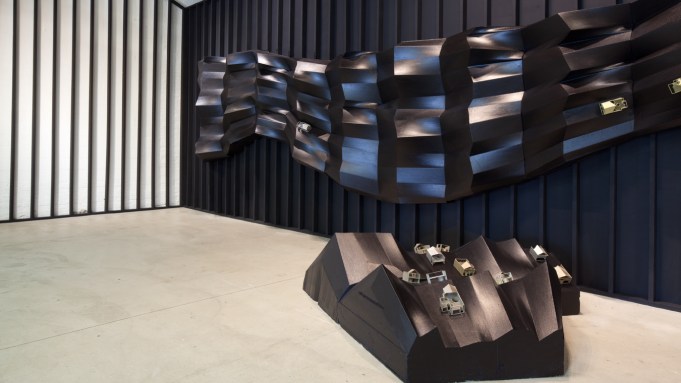 In 2016 we launched the Robert Rauschenberg Foundation/Art in America Arts Writing Fellowships, a joint project designed to foster art and culture writing in cities throughout the US. For our September issue, fellowship recipient Lynn Crawford wrote an account of new developments in Detroit’s creative communities. Here she reflects on the most significant artworks produced in the city over the last year.

I was happy to contribute a story to this monograph on African-American painter Peter Williams. The title is the name of a black superhero who appears in the book’s seventeen images. Williams, whose influences range from Goya to Guston, works solidly in the tradition of cutting-edge black humor forwarded by writers such as Ishmael Reed and Bill Harris. The book includes a fantastic conversation between Williams and the Detroit-based Harris, who discuss, among other things, how they grew up watching and enjoying superheroes, who were always white. Williams’s character, The N-Word, swoops down from the sky to mete out justice in scenes of police brutality. The paintings’ colors evoke their themes: pale blue refers both to police uniforms and the blues genre of music, while shrill tones of red and yellow remind the viewer of all-American ketchup and mustard as well as the packaging of Kodak film (The-N-Word sometimes flies with camera in hand). African-American thinkers like Roxane Gay and Ta-Nehisi Coates are now doing superhero projects. (Gay is working on “World of Wakanda” and Coates is rebooting “The Black Panther,” both for Marvel). But Williams made his paintings four years ago. It’s significant to me that the book is published in Detroit, which has a small but budding number of potent independent presses.

Khan uses elements of his Pakistani heritage to investigate immigration, integration, and divisions. The gallery usually holds exhibitions in one room but Khan put up a folding screen wall, making two. Visitors had to step down and then up a small, perilously steep set of stairs to get from one space to the other. The first gallery space (Khan called it “external”) had the cold, impersonal feel of the faceless bureaucracy that goes into constructing, maintaining and enforcing borders like the old Berlin Wall or like the wall separating Israel from Palestine or the one that might separate Mexico from the US. After navigating the steep steps, you entered the main exhibition (which Khan called “internal”), a blossoming explosion of color and a feast for the eye that suggests the vibrant ways to thrive in secret. The beautifully rendered, intricate images—drawings, paintings, and sculpture include Pakistani minarets, a tiger mask, and modern items such as rollerblades and a disco ball. A menacing photograph shows a slaughtered water buffalo’s head and feet—the parts that usually remain of a suicide bomber. Khan reflects on the ambiguities of identities and prejudice as well as cultural production out of the public eye. He suggests ways to move forward without historical cultural erasure.

3. Nancy Mitchnik, “Uncalibrated,” and Mitch McEwan, “Methexis,” both at the Museum of Contemporary Art Detroit, Aug. 15–Oct. 11 and May 6–Aug. 28, respectively.

For two weeks in August, two remarkable shows overlapped at MOCAD that addressed one of the major concerns of Detroit today: living spaces. When so many homes have been razed, these two exhibitions offered potential solutions and ways to humanize buildings and keep memories alive. McEwan, an architect, showed design studies, maps, scale models, and abstract design codes produced as part of her residency at the museum’s Department of Education and Public Engagement. She offered potential solutions to preserving, rather than demolishing, vacant homes built in the early twentieth century with wooden balloon frames—a common style in Detroit featuring a plain pitch roof and no ornamentation. Mitchnik balances McEwan’s solution oriented approach with imaginative paintings. Mitchnik, a Detroit native who had a long career as a painter in New York and Los Angeles and has held teaching positions at Harvard, Bard, and Cal Arts, creates a kind of magic with her stunning use of light and geometry. The images in her strong, tender paintings include homes from the working-class neighborhood that she grew up in. You wonder about the history of these homes, which look-neglected. This show offered two ways to turn devastation into potential:  practical (McEwan) and imaginative (Mitchnik).

The Radicalization Process is an investigative performance about radical art and political extremism in American culture. It ran at Play House, a 1,000-square-foot corner house in Detroit’s Banglatown, just on the edge of Hamtramck. For years, the population of Hamtramck was primarily Polish. Now it’s home to a strong Bangali community. Before the performance, visitors were invited to spend time in the space’s basement, and peruse meticulously gathered archival material of radical history: archives from the Vietnam war, texts from Bobby Seale, poems by Diane di Prima. The play itself took place upstairs. It had a live original score, and consisted of multiple concurrent plots, layering timelines and historical acts of the radical left in the 1960s and ’70s, as well as an imagined future where Jesse Jackson is president. Theater itself—namely, the work of Adler, Antigone, Anouilh, and Brecht—is referenced along with politics. Absurd, funny, and heart-wrenching, the show makes a strong plea: There is no perfect radicalization process. But that doesn’t mean we shouldn’t try.

John Corbin constructs puzzlelike sculptures and collage to investigate ways meaning and measurements are invented and maintained. This stunning exhibition had a deft blend of deep roots and high flight. It included ticking wall clocks covered with thick layers of acrylic. Each clock was set to the correct time at the exhibition’s start, but they weren’t reset during the show’s run, and after the first few days they displayed the wrong time. Time marches on, even if human measurement cannot adequately represent it.

Corbin also showed collages of hexagonal sections of atlases—a thematic parallel to the clocks as a now-obsolete tool for measuring the world. Using maps as a background, Corbin rendered in acrylic cranes and other bird species with complex, consistent, and highly structured migration patterns. This beautiful, meditative, ultimately subversive show shifts the view on “truth.” This, for me, was in line with the ways Detroit is portrayed and understood-the dichotomy between the simplistic view from the outside and the deeper understanding from within.