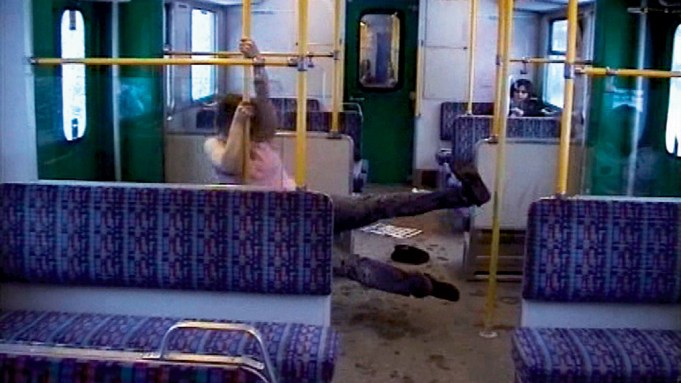 In performances, videos and installations, 32-year-old, Swedish-born artist Klara Lidén pursues an improvisational art of appropriation and détournement of existing spaces and materials. Her disruptions of urban business-as-usual have included removing all the advertising posters and billboards from downtown areas of several cities, breaking into a wild dance on a commuter train and creating a sculpture show out of stolen public waste receptacles. For “Pretty Vacant,” her fourth show at Reena Spaulings Fine Art, New York—a lead-up to a solo exhibition opening this month at the New Museum—Lidén transformed the gallery into a fragrant evergreen forest (or something like one) by filling it with Christmas trees collected off New York City sidewalks after the holidays.

Titled S.A.D., presumably a play on seasonal affective disorder, the installation was hidden behind a plywood wall-painted the same blue as the hoardings around city construction projects—dividing the gallery’s front office from its exhibition space. One entered the installation through an inconspicuous door, with a single nail for a handle, cut into the plywood. Inside, under grow lights, 80 or so half-dead trees were set upright in water-filled stands and buckets. They formed a dense thicket, through which wound a narrow path. At the end of the path was a small clearing, and in the clearing was a chrome-and-black leather sofa where visitors could sit.

Over the course of the show, pine, fir and spruce needles piled up in drifts, and the colors of the trees faded, in places to a ghostly lichen gray. As prescribed by the city’s sanitation department, the trees had been stripped of ornaments, but a few threads of tinsel remained caught in their branches. In the late afternoons, when the sun dropped low enough to stream in through the single window in the gallery’s west wall, the effect was magical.

More ominous—particularly for those who remember how popular it was in Brooklyn in the late 1970s to set fire to discarded Christmas trees—were the resinous smell of the trees, overpowering in the closed room, and the faint sound of the tinder-dry needles dropping off their branches. This undercurrent of tension, a feeling that things might be about to veer out of control in some unexpected way, is an earmark of Lidén’s work, in which what is calming and private can suddenly turn claustrophobic and isolating.

Lidén trained as an architect before going to art school, and her interventions often take the form of hidden sanctuaries inserted into public space. For Hus AB (House Inc.), 2003, the artist used scrounged materials to construct a subterranean shelter, its entryway a hatch camouflaged with sod, on the bank of the River Spree in Berlin. Her first solo show at Reena Spaulings in 2004–05 involved an elevated cubicle, built from iron pipes and bundles of cardboard reinforced with screws and glue, accessible by climbing a ladder. A 2007 show in Berlin featured an artwork (one of Lidén’s “Poster Paintings” made from rectangles of layered advertising posters cut from city walls) that swung away from the wall to reveal a staircase and secret room outfitted with a packing-crate table, lamp, ashtray and boom box.

But Lidén’s oeuvre is not solely a critique of the social and psychological controls exerted by the built environment. Often, her work engages larger systems and structures, in ways that speak of the possibility of resistance to those systems—as well as of individual freedom within them.

One such project was free postal service (Post, 2002-03), which Lidén ran for a year using a stolen mailbox in Stockholm. (People found out about the operation through flyers and word of mouth.) The enterprise delivered mail all over Sweden and to the rest of the world. Domestic mail was handled by Lidén herself, who once traveled a whole day to deliver a single letter; international mail was carried by friends traveling abroad. More short-lived actions were documented in a series of three photographs accompanying S.A.D. They presented Lidén variously descending into a manhole in Berlin, climbing a lamppost in San Antonio and standing on a half-submerged pylon in the Hudson River. On a nearby table, handmade flip-books created from video frames showed the artist disappearing down three more manholes. (The final work in the exhibition was a handsome makeshift lamp made from stolen traffic cones.)

A particular focus of Lidén’s attention is the apparatus of the art world-even as the artist herself increasingly becomes one of a certain class of productive, networked, globe-trotting professionals inhabiting it. For a project room at MoMA in 2009, Lidén built an enormous white plinth that took up most of the space in one of the museum’s galleries, topping it with bales of flattened cardboard from the museum’s recycling. A play on critic Brian O’Doherty’s use of the term “white cube” to describe modern exhibition spaces, the work brought the museum’s most invisible internal systems (the flow of waste) into its most obvious (the display of art), effectively pulling the museum’s workings inside out. A 2007 solo exhibition at the Moderna Museet in Sweden included a barricade, through which visitors had to navigate, made from the entire contents of her apartment (punningly titled Unheimlich Manöver [Uncanny Maneuver], 2007), and a gallery whose door was blocked with
a stack of folded billboards.

Never overtly political, Lidén is political nevertheless, merely by bringing to the fore things that are ordinarily invisible or taken for granted. But her provocations have a poetry to them as well, none more so than S.A.D., with its eerie spectacle of death imitating life.

A clear precursor to this work was Lidén’s 2008 show at Reena Spaulings, “Heating the Crows,” which similarly brought a spectral version of nature into culture. For that exhibition, as with “Pretty Vacant,” she walled off the gallery’s exhibition space. In the earlier show, however, she created a small room within it, reached through a narrow hallway. The rest of the sealed-off area was turned over to pigeons (lured in through open windows with birdseed), whose scratching and cooing could be heard though the smaller room’s Sheetrock walls.

Exhibitions based on Lidén’s activities, subversive and often illegal, ensure her increasing commodification as a rebel, even as she exposes the art world mechanisms that would market her as such. Lidén’s true (if only temporary) escape from instrumentalization may lie less in such exposures and more in the increasingly uncanny effect of her work, in her associative methods and above all, in the immediacy of her engagements with materials and situations. Nobody, including the artist, knows exactly what she will do for her New Museum show. A small survey of works from 2003 to the present is planned, featuring a selection of videos and poster paintings, along with a slide show, a sculpture and an installation. A brand-new site-specific work is promised. An upending of some aspect of the New Museum’s operations is almost certain. But the final outlines of the exhibition will be a surprise, happily not least to Lidén.

Currently On View “Klara Lidén: Bodies of Society,” at the New Museum, New York, through July 1.
ANNE DORAN is a writer and editor living in New York.