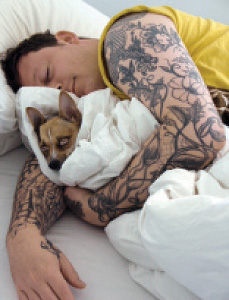 A photograph on the cover of the thick volume published in conjunction with Urs Fischer’s current exhibition at the New Museum1 shows the floridly tattooed Swiss artist sleeping, a small dog cradled in his arms. The dog is awake, but, unnervingly, it has been Photoshopped with human (Fischer’s?) eyes. Who or what is watching, and what kind of strange sights does the watcher see? In the exhibition, titled “Urs Fischer: Marguerite de Ponty,” the artist devises many subtle ways of throwing a viewer off balance. He offers a balm to those who have been disappointed with the New Museum’s digs on the Bowery, effectively dispelling the odd claustrophobia and awkwardness of the structure’s interior spaces in floor-size installations replete with visual subterfuge. Fischer’s intervention on the third floor is especially radical—not as violent, inarguably, as the giant hole he once dug into the foundations of his New York gallery (You, 2007, at Gavin Brown’s enterprise), but equally transformative.

Some critics consider Fischer’s work to be hermetic, or that of an art-world insider, but I would argue on the contrary that his practice is sociable, reaching into the history of art without succumbing to academicism, while pleasing a crowd. Clever resonances—Kippenbergian irreverence, Koonsian schlock and shape-shifting as relentless as Polke’s—do nothing to lessen Fischer’s originality. Moreover, you don’t have to recognize his hyperawareness of art past and present to enjoy the show. Watch people jump and gasp, then laugh, when startled by Noisette (2009), the human-looking tongue that darts out of a hole in the wall when a sensor detects their approach, or observe them wandering with manifest delight through a field of mirrored boxes screenprinted with blown-up, mundane objects, into whose universe they are insinuated by reflection. If neither Warhol nor Minimalism is uppermost in visitors’ minds, nor even the mirrored boxes’ unsettling implications, it hardly matters. Fischer effectively straddles worlds without detracting from the integrity of his pursuit.

Containing just four works (all 2009), the museum’s third floor is discreetly dominated by the slyest of them, Last Call Lascaux, a huge digital photograph of the walls and ceiling of the room, exact and to scale, which has been attached to those selfsame walls and ceiling. Well, not exactly: the ceiling was lowered for the occasion and papered with the image of the now hidden ceiling, and the dropped ceiling fitted with new lighting that mimics the system above. The walls, meanwhile, are completely sheathed in giant shadowy images of themselves after removal of the previous exhibition, complete with scratches and other imperfections. The visitor, stepping into this doppelgänger of a room, is optically bathed in a purplish meltdown of process colors, which modulate almost imperceptibly, so that some areas are more yellow, and others more magenta. (The wallpaper is actually a photograph of fluorescent light reflected off the walls in colors the human eye normally does not perceive.) The result is a subtly living, breathing space, an effect only enhanced by the tongue piece, which operates at head level from within the longest wall. One is reminded of the arm corridor in Cocteau’s Beauty and the Beast, in the sense that the space seems sentient, and of Robert Gober, who has often bestowed on rooms a creepy double life.

And of Fischer himself, who has replicated gallery walls before, most memorably in a 2008 exhibition at Tony Shafrazi Gallery in New York (a collaboration with Gavin Brown). In that show, the gallery was wallpapered with the image of an entire prior exhibition, from the works on the walls to the guards; then a new show was mounted over the wallpaper and patrolled by the same guards. While there are probably many readings of the show’s title, “Who’s Afraid of Jasper Johns?,” I was reminded of Johns’s obsessive, career-long self-reflexiveness (down to the concept of the Watchman, a metaphor of detached artistic awareness, which he famously described in his 1964 sketchbooks). Like Johns, Fischer is apt to recycle and recontextualize his own imagery, cite art history, and deploy doubling and reflection. Such practices are very much at play in the New Museum show.

At the center of the third-floor gallery is a drooping grand piano (2009) cast in aluminum and painted a matte lavender; the color is chromatically related to that of the walls. The sculpture is cartoonish, a gaudy ghost of a piano too worn-out to play, like an exhausted prop from a 1930s Max Fleischer animation. (The piano, with its Dalí-esque melting posture, is echoed on the second floor by a pair of turquoise water spouts, and on the fourth by a pink streetlamp.) Finally, a preserved croissant is suspended from a monofilament; a preserved blue butterfly has lighted upon it (Cumpadre, 2009).2 The butterfly on the croissant is reminiscent of the (live) colored parakeets that pecked at the masonry loaves comprising the house of bread installed by Fischer in New York (at Gavin Brown’s enterprise) and Milan (at Fondazione Trussardi) in 2004-05.

The fourth floor is presided over by a conclave of five hulking sculptures approximately 10 to 18 feet tall. Four of them originated as single handfuls of clay that the artist squeezed into these lumpy shapes; the enormously scaled-up pieces retain the imprint of fingers and palms, an amusing take on the “handmade” (though they are cast aluminum). Those four (2006-08), resting on the floor, bear as titles pseudonyms used by Stéphane Mallarmé (Zizi, Miss Satin, Ix and, like the show itself, Marguerite de Ponty). Their bulges and indentations resemble folds of flesh, and their overall postures are humanlike, though they are fully abstract. The fifth and largest of the group, actually the shape of the inside of a squeezed handful of clay,3 is enigmatically titled David, the Proprietor (2008-09); it has been hung from the ceiling so that a tail-like appendage at the bottom dangles a few inches above the floor.

In the show’s accompanying book, a similar hulking figure appears in digitized montages looming like some weird space invader over the (already fantastical-looking) Shanghai skyline and other city settings. (The images are excerpts from Fischer’s 2008 artist’s book Helmar Lerski.) Fischer had wanted to realize the sculptures at a larger scale;4 though monumental, they are tamed and crowded by the museum’s space. And one can only wonder about their grouping in the gallery with three additional sculptures, which feels random, though vaguely urban, if you recall the montages, and meditate upon the sculptures’ titular association with Mallarmé—flâneur, denizen of the city. The big pieces share space with the pink streetlamp (Frozen Pioneer, 2009); a piece titled Violent Cappuccino (2007), whose main component is one of Fischer’s trademark charred skeletons; and a cast polyurethane-and-steel ensemble called The Lock (2007), placed at the far end of the room against a wall. This consists of a section of seating from a city bus; just over the seat, attached to the wall, is a suitcase, and quite literally hovering, via magnets, between the suitcase and the seat, is a faux birthday cake on a plate. It is as if the seat is occupied by the spirit of a celebrant commuter.

Uncharacteristically pristine (for Fischer) and fragile (so much so that the museum limits occupancy of the gallery), is the suite of mirrored boxes, 51 altogether, on the second floor. Titled “Service à la française”(2009; the title refers to a meal whose courses arrive all at once), the work is installed throughout nearly the entirety of the room. Made of mirrored chrome steel, the boxes are of various sizes and proportions, ranging from low and flat (presenting the image of a packet of spent matches) to near-ceiling height (the Empire State Building topped by King Kong). They densely grid the space, and are meant to be walked among, like city blocks in a scale model, or gravestones. Each represents a different object or foodstuff that has been photographed from the top and four sides; each of those shots is cut out to the shape of the object and, screenprinted onto the surface, occupies the corresponding face of the box. The irregular mirrored borders around the outlines offer fragmentary reflections of the other objects, and of the people wandering through. (Michelangelo Pistoletto’s Mirror Paintings are the obvious precedent.) In a nice allusion to the installations upstairs, “Service à la française” has a single ceiling-suspended element bearing the image of a section of chain—the kind of chain that might hoist up a giant aluminum sculpture like David, the Proprietor.

In this oversize still life, Fischer plays intriguingly with scale, making decisions based on each object in turn, rather than proceeding from an a priori rule. “What determines the ultimate size of each object is based on architectural reasoning,” explains Fischer in an interview with the show’s curator, Massimiliano Gioni. “There seems to be a certain size that is ideal for each of these objects.” Most often the images are of tabletop statuettes or common things like lighters that, in the image, have been greatly enlarged but “somehow appear no bigger than they were before.”5 In a couple of cases—the miniature of an English phone booth, for example—the photographic scaling-up results in a mirrored surrogate that is just about the true size of the thing that the statuette is meant to represent. Following some basic logic of relativity, the Empire State Building is the tallest element in the room, but of course it is many times smaller than the edifice itself. The food is larger than life (bread, sausage, congealed Froot Loops and, twice, a pear, in one image freshly sliced, and in another rotting), but images of a real ladder and broken guitar are near their actual sizes.

Although the boxes are insistently physical, much like Minimalist cubes, the objects depicted are inaccessible, even spectral in feeling. Paradoxically, reconstituting the objects as images on the faces of geometric solids only enhances the quality of flatness. Seeing our own reflections in this cold, glittering environment is hardly welcoming; we are made to feel our estrangement from the utilitarian and disposable objects that fill our consumerist world. Yet, disoriented though we may feel, we lose our bearings willingly and with pleasure, stepping through the looking glass and into a museum transformed.

1 Massimiliano Gioni et al., Urs Fischer: Shovel in a Hole, New York, New Museum, and Zurich, JRP/Ringier, 2009. At 480 pages, the book fills a retrospective function (unlike the show), exhaustively illustrating installations, exhibitions, outdoor sculptures and other works from 1993 on. Though the volume is handsomely designed and the illustrations excellent, works are arranged in often vague thematic order, sections are not identified in any way and the works keep reappearing from different angles in different parts of the book. It is all rather chaotic, though navigation is aided by a checklist-type index.

2 The croissant and a collaboration with Georg Herold in the tiny stairwell gallery, involving a sausage, carrot and cucumber as “light” fixtures, rotting rather than preserved, are the sole works containing actual foodstuffs, which Fischer has often incorporated as a medium à la Dieter Roth, his compatriot.

“Urs Fischer: Marguerite de Ponty” is on view at the New Museum, New York, through January 24. The accompanying catalogue includes an interview with the show’s curator, Massimiliano Gioni, and essays by Bice Curiger and Jessica Morgan.