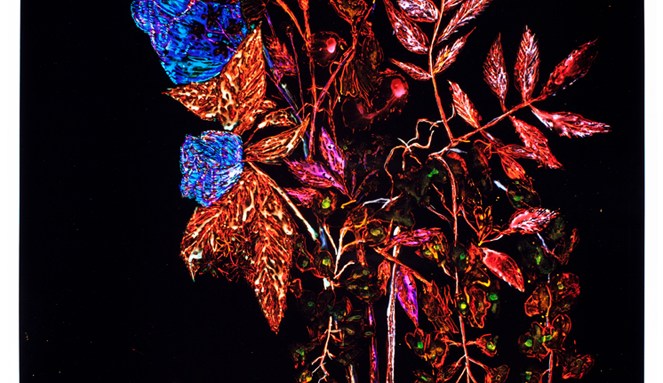 “Streaming Spirits” is the evocative title of a show of new prints by Kiki Smith and Valerie Hammond organized by curator Crista Cloutier at Galerie Pfriem at the Savannah College of Art and Design’s Lacoste, France, campus [through Sept. 1]. The exhibition, loosely based on Victorian “ghost” photography (in which spirits were putatively captured on film), is only fitfully vested in the supernatural; the artists are more concerned with human energy. Incidentally, Lacoste is the site of the chateau of the Marquis de Sade (now owned by Pierre Cardin), where ghosts are believed to linger. Hammond was raised Catholic and says she still believes in spirits and saints. “I am always interested in people who believe in illusions since as artists, we are illusionists,” she told A.i.A.

The show is more or less evenly divided between the two artists, working in a gratifying range of printmaking techniques. More will be on view in an expanded version when the show travels to SCAD Atlanta, Jan.-Mar. 2013, and then to the SCAD Museum of Art in Savannah [exact dates TBD].

“A great deal of what you make and put your energy into is about amulets or talismans in an attempt to inject the physical world with meaning,” Smith told A.i.A. “Just the act of making art can be transformative.” Color Noise (2012), an inkjet print combined with lithography on accordion-folded paper, feature slightly varied photo images of the artist’s face printed along the top section, one per fold.  They seem to move as your eye scans them, suggesting a sequence of quasi-animated apparitions above a field of softly tinted, as if exhaled, impressionistic dabs of colors. Breath (2012), a multi-plate lithograph, hand-colored in fugitive tonalities, is a sensitive, ethereal portrait of the artist’s sister, Seton Smith. Both could refer to qi, the animating breath of life.

Hammond presented a number of equally tenuous materials that invoke transformation and transitions, including a beautifully delineated bird’s wing; a lacily cutout multimedia book, Substance of a Dream (2012); and a hand-colored photogravure of Smith submerged in water that resembles a photographic negative. Apports (2012), a haunting photogravure that looks like an eerie mermaid but in fact captures Smith’s back after receiving gua sha, a Chinese massage that uses a coin or other implement to rupture superficial blood vessels. Hammond’s is a reversed image that gets beneath the skin.

Both artists depict flowers, which here double as spirits in disguise or metaphors. Hammond’s Embrace 3 (2012) is a pale red flower clustered with butterflies that recalls the controversial Cottingley Fairies, 20th century photographic hoaxes (championed at one point by Sir Arthur Conan Doyle) featuring a young girl surrounded by miniature women with butterfly wings. Smith’s C-prints of radioactive blue and red blooms emerging from a black ground, Haunted (2011), suggest something more toxic and decadent.

Hammond says she wanted to combine “death and life, all feeding back into each other.” Smith adds, “whatever spirituality means is very open, very broad with no consensus but it is a dominant part of both our work.” In the end, “Streaming Spirits” may be mostly about the artists themselves and their elective affinities.