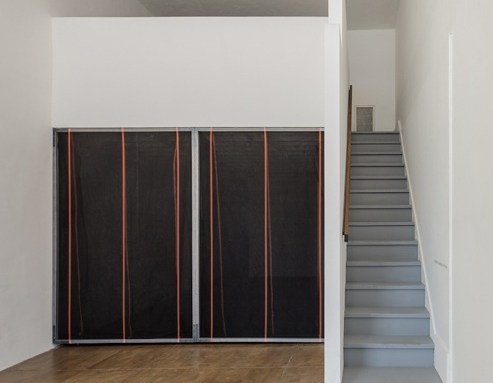 New York-based artist Valerie Snobeck’s solo show opened at Thomas Duncan Gallery in Los Angeles at the unconventional hour of 7:30 PM [through May 26]. The pitch darkness outside ensured that the objects in Snobeck’s sparse exhibition, “They Seem Removed,” would be entirely flattened under the uniform bright fluorescent lights, making the space over into a partially obscured, shadowy construction zone. During the day, the site-specific installation relaxes into a dance of material and California light.

Snobeck’s work is all about the spatial limitations on vision. The eponymous works in the show (all 2012) are semi-transparent scrims set up vertically on the ground floor and the gallery’s mezzanine. The ground floor structure, comprising a diptych of wood frames stretched  with black netting with some orange stripes, has been fitted into the main gallery entryway to create an enclosure, blocking off entry or delineating the space as a work in progress. The structure on the mezzanine is less refined, with a looser, almost gauzy application of netting.

The artist’s partitions perform very different effects depending on the light. At the opening, they were like impenetrable walls, their shiny patina reflecting the fluorescence from above, creating a visual boundary. Seen during the day, these structures are see-through textile canvases, illuminating the voluminous curves of material.

These physical interruptions intensify the gallery’s atmosphere, an affect that the artist diverts into psychological territory through a poetic text accompanying the show. “I had been studying the language origins of materials, concepts and processes I had been working with,” Snobeck told A.i.A. The artist draws connections between the installation itself to words that describe states of physical construction and completion, like “depression” and “repair,” which also evoke subjective emotional dynamics.

Behind the ground floor structure, Snobeck has included two 1930s-era glass plates that sit on the floor of the main gallery, accessible only from behind the barricade that the debris netting constitutes. “The Depression has been called the industrial revolution of the glass industry,” remarks Snobeck, alluding to advancing manufacturing practices that drove the mass distribution of plates. Snobeck also sees the circular forms as pie charts. Works like Tool Construct 5 (2012), dishes behind netting, serve as shadowy markers of the economy.

The material recalls scaffolding in New York, where it is used to protect pedestrians while buildings are erected, destroyed or refurbished. “At about the same time as I was becoming aware of debris netting in my research, I became aware that it was being used to assist in the reconstruction of a public institution outside my studio window,” Snobeck says.

The artist has used debris netting in the past, but on a smaller scale. At Le Consortium in Dijon [on view through Sept. 2], Snobeck has superimposed stretched netting onto a piece of excoriated mirrored glass. The debris netting arrests the mirror in a crystalline dispersion—it becomes never quite finished but not incomplete. The installation in Los Angeles has a similar effect on the gallery, melding the unfinished aesthetic of the architecture with the works, suspending the use of over half of the space on the ground floor, and creating a visual boundary between inside and outside on the mezzanine in the form of the window panel.

30 High-End Gift Ideas From Black-Owned Brands, From Bourbon to Bedding