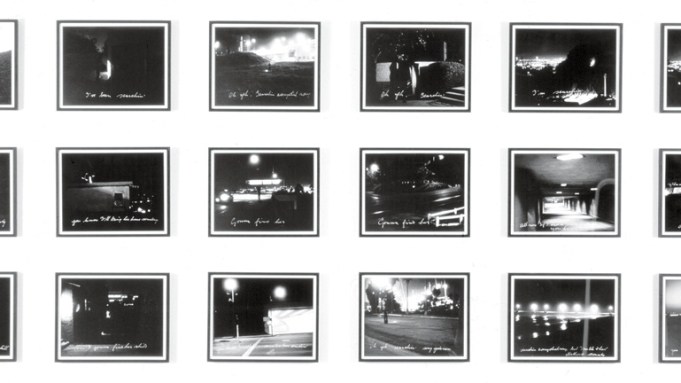 On July 9, 1975, Bas Jan Ader (Bastiaan Johan Christiaan Ader), the Dutch-born, Los Angeles-based Conceptual artist whose work encompassed photography, film and performance art, embarked from Chatham, Mass., on a solo voyage across the North Atlantic. The purpose of the trip was to continue his three-part performance project, “In Search of the Miraculous,” a quest that in hindsight grows increasingly poignant. Ader set sail in a tiny pocket cruiser, expecting to make landfall in Falmouth, England, in two to three months. The 33-year-old artist was never seen again, although his boat was found approximately nine months later, to the south of the Irish coast. Towed to La Coruña in Spain, it mysteriously disappeared soon there-after. Speculations about his death were rife, ranging from a tragic accident to suicide to a secret vanishing into another identity. It was a departure so narratively seductive that it seemed scripted, destined for myth.

Ader’s reputation declined during the 1980s but in recent years, his work (perhaps the most widely known is the silent film I’m Too Sad to Tell You [1971], in which Ader, a latter-day Man of Sorrows, cries inconsolably) has been included in a succession of exhibitions, publications and documentaries, reviving interest in this charismatic artist of tantalizingly elusive intent. One of the best of these appreciations is the recently published book Death Is Elsewhere by Alexander Dumbadze, an art historian who teaches at George Washington University. Although short, it is the most probing, most comprehensive and nuanced discussion of Ader to date. Dumbadze, in a focused, meticulously researched study, zooms in on the years Ader spent in Los Angeles, from 1963 to 1975, when the city was still considered by many to be a cultural outlier. Intertwining the histories of Ader and his milieu, Dumdadze persistently explores—like the artist himself—some of the broadest aesthetic questions: What is the relationship between art and life? What is the nature of representation?

The author tells his tale with sensitivity and insight, his considerable erudition deployed lightly, conveying complex concepts in prose that is clear, elegant and engaging. And to his credit, while the elephant in the room is always Ader’s untimely death, Dumbadze refuses to mythologize his subject. Pathos is unavoidable, but the author rightly shuns sentimental clichés and the sensational. Instead, he fixes on Ader’s small, idiosyncratic but riveting body of work, distinguishing it from other avant-garde art in Los Angeles and elsewhere. Many of the artists Dumbadze discusses showed at the influential Art & Project gallery in Amsterdam, Ader’s principal gallery during his lifetime. It was the city’s leading venue for Conceptual, Minimalist and Land art from the late 1960s through the ’80s, its stable including the likes of Daniel Buren, Robert Barry, Ger van Elk, Gilbert & George, Joseph Kosuth, Allen
Ruppersberg and Lawrence Weiner.

Ader was born in 1942 in Winschoten, the Netherlands, and spent much of his childhood in nearby Drieborg, raised by his mother. His life was disrupted early on. His father, for whom he was named, was a Dutch Reform minister and resistance member, executed in 1944 by the occupying Germans for sheltering Jews. Dumbadze recounts these events, but without overly psychologizing the emotional trauma, although he states that the elder Ader’s heroism haunted his son all his life, as did his parents’ spiritual beliefs. He examines the Calvinist tendencies in Ader’s work, even though Ader himself said nothing about them and, indeed, renounced institutionalized religion, more taken with existential writers like Camus and philosophers such as Wittgenstein, Kant and Hegel. As a teenager, Ader attended classes at the Gerrit Rietveld Academie in Amsterdam and participated in a study abroad program in Washington, D.C., in 1960. America appealed to him, and, returning, he arrived with a flourish in Los Angeles in 1963, after a harrowing, months-long, 11,000-mile journey from Morocco on a small sailboat with one shipmate, proving, Dumbadze argues, that Ader was an able seaman, his later decision to sail alone risky but not suicidal.

Ader went to the then-named Otis Art Institute, where he became interested in photography, graduating with a BFA in 1965. That same year, he married Mary Sue Andersen, a fellow student whose father was the Otis director. Ader enrolled at Claremont Graduate School, interested in philosophy as much as in studio courses, earning an MFA in 1967. Afterward, he taught at several institutions, including Mount San Antonio College, Immaculate Heart College and the University of California, Irvine, where his students awaited his return in the autumn of 1975.

Dumbadze bases much of his information about Ader on Dutch critic and gallerist Paul Andriesse’s extensive archive, compiled for a catalogue raisonné published in 1988. Additionally, he talked to the artist’s widow, his younger brother, Erik Ader, and close friends and fellow artists, including van Elk, Ruppersberg and William Leavitt. Ader’s own writings and notes are scant, and he disliked formal interviews, giving very few. Nonetheless, his individualism comes through from his few letters, notebooks and, of course, his singular work. Dumbadze divides his book into five concentrated sections: “Falling,” “Representing,” “Trading,” “Sailing,” “Dying,” the active mode of the titles emblematic of Ader’s inexorable trajectory.

Falling, or gravity, the subject of Ader’s early work, was inspired by his philosophical readings and his increasing need, Dumbazde conjectures, for an “intellectual core” to his work. The films Fall 1, Los Angeles and Fall 2, Amsterdam, both from 1970, are short—24 and 19 seconds, respectively—slight but compelling works that Dumbadze analyzes for their investigation of free will and the lack of it, a theme he pursues throughout his book. Appearing blithe—he was always a prankster and charming—Ader courts danger in a way that seems portentous only in retrospect. Fall 1 shows the artist precariously seated on a chair atop the pitched roof of his house. Slowly, he tips himself over and rolls down the incline, falling off the edge and hitting the ground; hidden mattresses break the fall. In the Amsterdam version, he rides a bicycle into a canal, with nothing to lessen the impact. In both, there is a visible moment of hesitancy that Dumbadze finds critical. Ader once famously proclaimed to Willoughby Sharp, cofounder of Avalanche magazine, “When I fell off the roof of my house, or into a canal, it was because gravity made itself master over me.”

Comparing Ader and Chris Burden, Dumbadze states that the essential difference between them is their relation to representation, observing that “Ader performed for the camera and posterity” while Burden had “several layers of audience.” He closes the book’s second section with The Boy Who Fell Over Niagara Falls (1972), a performance Ader gave at Art & Project and Kabinett für Aktuelle Kunst in Bremerhaven. It essentially consisted of him reading the Reader’s Digest story of seven-year-old Roger Woodward, who miraculously survived the plunge over the falls. An exception in his practice, the live performance was his most public piece; in it, Dumbadze says, Ader had shifted far, making himself the site of his art. He was finding his way toward “an art that could communicate without recourse to representation.”

That lack of representation Ader found in futures trading, which he became interested in when he returned from Europe after the Niagara Falls performance. Declaring his buying and selling to be art further blurred the boundaries of art and life for Ader. It didn’t matter that there was only an audience of one; in fact, it was preferable. Ader wanted to bring art into the world, rather than the reverse, without aestheticizing life or altering the nature of art.

“In Search of the Miraculous (One Night in Los Angeles),” 1973, is a series of intensely romantic, intensely moving photographs of Ader that his wife took as they walked through various parts of the city. The artist is pictured in the distance, engulfed by shadows, barely visible. Each photo is hand-inscribed by Ader with lyrics from “Searchin’,” the 1957 song sung by the Coasters, with its plangent refrain, “Gonna find her.”  The final image shows the artist on the beach, a nearly effaced figure of isolation, the lights of the metropolis far away. Poised between the quotidian and the sublime, the image is ambiguous but not ironic. “In Search” has much in common with Ader’s trading project, Dumbadze observes. Ader had devised a way to represent the intangible and elusive. Dumbadze does not define Ader’s fateful voyage as a performance. His art by then rested in his person, in his physical being, in his “aura.” The trip emphasized life instead of the representation of life, the invisible made visible, the logical—perhaps even inevitable—next step in his evolution.

Dumbadze interprets Ader’s unclassifiable, uncanny, prescient art and his all too brief life with an empathy, intelligence and objectivity that make this book rewarding to read, lingering long afterward. It is not a criticism to say that even more would have been welcome. In a 1972 interview with journalist Betty van Garrel, the artist (who later disowned the statement) confessed, “I have always been fascinated by the tragic. That is also contained in the act of falling; the fall is failure.” Dumbadze, quoting it, says the self-revelation rings true.

LILLY WEI is a critic and curator who lives in New York.