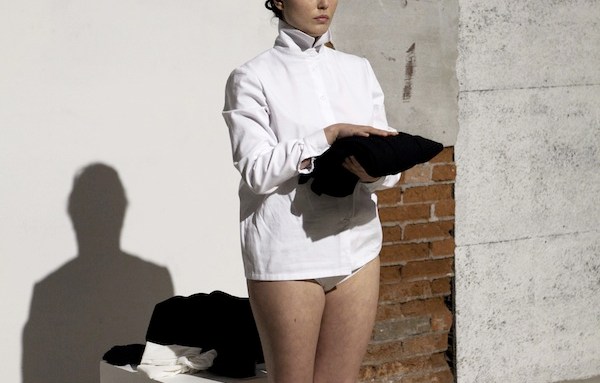 In contrast to Massimiliano Gioni’s intentionally overwhelming “Encyclopedic Palace,” the main exhibition at the Venice Biennale, it is something of a relief to turn to the more modest show “vice versa,” housed nearby in the Italian Pavilion in the Arsenale and curated by Bartolomeo Pietromarchi. Rather than attempting the encyclopedic, “vice versa” focuses on a series of seven paired concepts and often pursues them through live performance. Though in all instances these works shy away from spoken text, they are an effort to create a dialogue in a landscape conceived of in theatrical terms.

The dichotomy of body/history frames the discussion in the first room. Towers clad in wood and braced with steel rise up from low concrete platforms in Francesco Arena’s Massa Sepolta (2013). One must read the wall text to discover that the towers contain dirt-an amount that, in Arena’s calculation, equals the displaced earth from mass graves in several 20th-century conflicts: from Burgos, Spain during 1930s Spanish Civil War; from Benedicta, Italy during Mussolini’s dictatorship; from Batajnica, Serbia during the civil war and ethnic cleansing; and from Ivan Polje, Kosovo, during the conflict there in the 1990s. The looming towers shield the soil from view, but the knowledge of what they contain lends their presence a solemn dignity.

This monumental piece is paired with Fabio Mauri’s Ideologia e Natura (1973), a quiet live performance by a young woman, standing in front of a stark white background. Completely expressionless, she avoids eye contact and seems to take no notice of the bevy of photographers snapping away. Her performance consists of removing her clothes and putting them back on. She presents each of the pieces of her costume to her viewers as she removes them. Then she makes one quarter turn, then another, places the item on the white cube behind her, makes another quarter turn again toward the side, and then another so that she faces forward, pauses, and removes the next piece. There is nothing erotic about the striptease. The explanatory text identifies the modest outfit (long black skirt, high-collared white shirt, white stockings, Mary Janes) as belonging to the Fascist youth group under Mussolini. This is not the body of the artist as performer, but rather the vulnerable, malleable body of an anonymous young woman. On the wall there is a picture of her seated on the ground with her legs raised up, revealing the crotch of her white panties.

The pairing is extremely astute. It elicits contemplation of the body and history, of death and its origin in ideology, of the exuberance of belief and the trauma of mourning. It is a formal composition whose silence draws our respect.

The theatricalization of art and thought continues in the next room, where the paired ideas are perspective and surface. In Giulio Paolini’s Quadri di un’esposizione (2013), the lines of perspective drawn in graphite on an immense white surface create the illusion of theatrical space. The recession of geometric forms, some of them marked by an x or built up into a drawing of a picture frame, recede as in the stage of a Palladian theater. In the center of this wall-size drawing, where the outline of a cube creates the focal point, the plane acquires the effect of a relief as frames, a white canvas and Plexiglas boxes rise from the otherwise unadorned surface. Placed several feet in front of it, as a sort of apotheosis of perspective, another larger Plexiglas cube contains a jumbled pile of Plexiglas squares—the drama having crashed.

Paolini’s perspectival model is paired with Marco Tirelli’s Senza Titulo (“untitled”), 2013. In this work, a constructed white room within the exhibition space is covered in drawings and models which look very much like stage sets. Indeed, the explanatory wall text references the “theater of memory”—the concept that knowledge can be imagined as a theater, enacted into space, and organized. The various drawings and small platforms invite narration and the action of drama. In the most interesting of these, a group of mirrors is placed in a circle, a clever arrangement that raises very neatly the ideas of representation and reception, of how we see ourselves in what we view.

Outside the pavilion is the dichotomy of tragedy and comedy, like the ancient masks that symbolize theater. Sislej Xhafa’s performance piece Parallel Paradox (2013) invokes the quasi-psychoanalytic relationship between the barber and the barbered, a paid relationship whose physical intimacy can induce a kind of confessional conversation. The barber, in a white coat, sits on a tree branch, and his customers are pulled up on a rope to meet him. A barber pole attached to the tree twirls. The hair gathers in a hirsute field on the ground below. Here, somewhat disappointingly, the barbered person exchanged comments only with the crew on the ground, not with the barber. Perhaps because the customer is secured through an excessive body rigging in order to make the ascent without the risk of serious injury during the haircut, there is less freedom of conversation.

Nearby stands an approximately three-meter-high cube made of cement and pure gold by Piero Golia, called Untitled (My gold is yours), 2013. Golia has embedded a kilogram of gold in the cement, and visitors are invited to chip away at the block. The idea of art presented is ironic; something overvalued, misunderstood in regard to its permanence, questionable in its usual, distancing relationship to the viewer.

Back inside, the pairing of familiar/strange underlies the visual conversation between an emblematic architectural form and a performance that relies on impermanence and the illogical.

Flavio Favelli’s La Cupola (2013) is designed to remind one of the dome of the basilica of St. Peter’s in Rome, an architectural reference also known from its use in secular contexts, such as outdoor pavilions. This is rendered in a fairly large scale in sheet metal, wood and glass, and filling one side of the airy hall in which it is shown. It is so familiar that it almost does not invite examination, especially as seen paired with Marcello Maloberti’s La voglia matta (the craving), 2013. In this piece, atop a marble monolith at center, four young people in everyday clothing solemnly raise and lower beach towels with a gaudy sunset printed on them. They also display the towel’s reverse, covered in a shimmering silver. Around them a few dozen other young people, also casually dressed, hold up peculiar one-legged tables, to which they are connected by studded black belts. They are apparently allowed to take breaks, as a few of the tables lie on the ground. Some of the tables are mirrored, and some have melons on top of them. Many are also mounted with simple, geometric wooden sculptural forms. The performers are quiet: staring, sometimes yawning, sometimes revealing the physical strain of turning humans into living sculpture.

The following room is marked by the pairing of sound and silence. Neither is in fact silent. In Massimo Bartolini’s Due (2013), a bronze casting of rubble atop an existing ramp, designed by Franco Purini, visitors are invited to climb the uneven path; they giggle and slip on the rocky pavement. Next door, definitely the louder of the two, Francesca Grilli’s Fe2O3, Ossido ferrica (2013) consists of a large slab of iron on which water drips from the ceiling. The pace of the drip can be determined by a performer, who sings into a microphone, suspended from the ceiling; her voice triggers an increase in the rapidity of the flow. A reddish-orange stain appears on the iron slab as it decays, almost suggestively figurative. The rust glistens, alive.

The show’s pairings create a fruitful symbiosis, a theater for thought, or, as Pietromarchi says in his curatorial essay, art in which “landscape becomes the stage, historic performance, opera theater and well-known imaginary history.”

From Woolrich to Prada, the Most Luxurious Discounts Online This Week