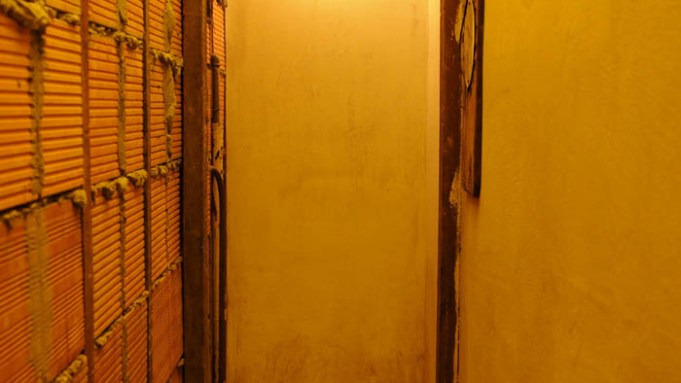 It’s a far cry from the slap-in-your-face irony of the YBA years. Forming something of a golden triangle at the Biennale, which opens to the public tomorrow, the U.K. offers a trio of thoughtful installations, all well worth the trek: Mike Nelson at the British Pavilion in the Giardini, officially representing the nation; Karla Black at the Palazzo Pisani in Cannareggio, representing Scotland; and Tim Davies at the Ludoteca Santa Maria Ausiliatrice, Castello, representing Wales.

At the Giardini, Nelson has skillfully transformed the pavilion into what feels like an endless series of small rooms, airless and abandoned but for human traces here and there: makeshift bedding, dusty tools, an empty water bottle. Lighting is dim. Along one stretch a large group of photos hangs as if having just been developed in a darkroom. One gets the feeling of a creepy habitation in which the outside world is registered from a very great psychological distance. I was glad to see it before the crowds arrived; the queues are now long, and the claustrophobic interior cannot be fun in the company of many.

In fact, the Venice warren, pretentiously titled I, Imposter, harks back to an earlier, similar installation of connecting rooms that Nelson created in a 17th-century building at the 2003 Istanbul Biennial, though he has constructed this piece from memory rather than any kind of literal plan. I, for one, was reminded of Gregor Schneider’s chilling 2004 London installation Die Familie Schneider, minus the theatrics.

Supremely light by contrast-in a good way-is the Glaswegian Black’s installation of a group of sculptures, most new. The Palazzo Pisani has proven to be an auspicious site for Scotland in both the last biennial and this one. Last time it was Martin Boyce who effectively echoed in his works the angular architectural details of this elegant 15th-century palace. Black, by contrast, throws a party. Her assemblages, pastel-colored confections made of colored plaster powder, sugar paper, string and cosmetics, among many other materials, occupy the rooms just as emphatically, though with a more throwaway feel. A big clear-plastic bow is suspended from the ceiling; a layered stack of pulverized plaster (I think) looks something like a giant cake, though abstract. Pale green paper trapezoids are strung from the ceiling, and large assemblages of irregular contour stretch from wall to wall.

Though supremely pleasurable (one room was perfumed with lemongrass), Black’s assemblages are formally canny, some lying just on the edge of representation, others settling comfortably into the “unmonumental” zeitgeist-though without a trace of that loose movement’s collagist sensibility.

Swansea-based Tim Davies contributes a degree of passion to the mix in a group of videos and a wall of altered postcards installed in the rooms of a 16th-century former convent (a new venue for Wales), not far from the Giardini. The installation opens with a work from 2010, one of a series of videos based on the national Remembrance Day services throughout the U.K. In Cardiff, troops parade before a war memorial, a priest delivers his service beside a fidgety young female cadet, and Davies frantically pans the memorial with his hand-held camera. Further on is a grid of postcards in which Davies scratches out all but a section of famous bridges around the world, leaving fragments floating in a palimpsest.

Best are the final two videos. Having arranged with the authorities to make a video of himself swimming in a Venice canal, Davies promptly injured himself on broken glass. But what he settled for-an image of his hand stroking the water from a boat-offers a lyrical moment of calm in the storm of his more agitated camerawork elsewhere. For in the next room, he races up the stairs of the Frari as bells chime louder and louder, though he winds up quietly panning over a panorama thickly shrouded in mist. Davies spent six months in Venice creating these works, and one feels his deep engagement with the place. That sense of interiority, which feels sincere and particular, seems a far cry from the Gothic subjectivity of Nelson.