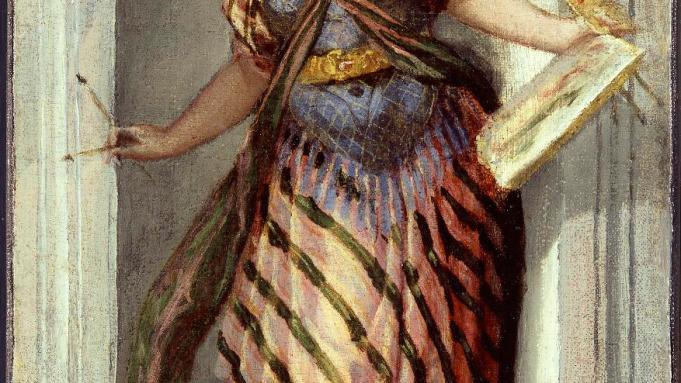 The 2009 exhibition “Titian, Tintoretto, Veronese” at the Louvre and Boston’s Museum of Fine Arts cast Venice’s Big Three Renaissance painters as, respectively, “gold, silver, and bronze,” according to Virginia Brilliant, curator of European art at the John and Mable Ringling Museum of Art in Sarasota, Fla. Her show, “Paolo Veronese: A Master and His Workshop in Renaissance Venice,” at the Ringling through Apr. 14, makes a case for Veronese’s claim to a golden crown.

There couldn’t be a more felicitous venue in North America for the exhibition. The circus entrepreneur John Ringling (1866-1936) and his wife Mabel loved Venice and built a Venetian Gothic mansion (Ca’ d’Zan, or House of John) on Sarasota Bay. In 1931 they commissioned a museum in Italian Renaissance style for their art collection and later donated house, museum and collection to the state of Florida.

Brilliant calls the 1926 mansion, which is a knockoff of the Doge’s Palace, “a little kitsch but still pretty cool.” Ringling not only scooped up Old Master canvases by Rubens, El Greco and Van Dyck; he also shipped European architectural fragments and sculptures to Florida to adorn the museum, some of which ended up in a pile on the estate that museum staff irreverently called the “boneyard.”

Corinthian marble columns excavated from these leftovers now dress up handsome galleries for the run of the exhibition, and are perfect accessories given how important classical, Palladian architecture was as a stage for Veronese’s compositions. The lush museum grounds, sunlight playing on the bay, and Veronese-blue skies with wispy mare’s-tail clouds create a Venetian ambience. One almost expects a gondolier to drift by crooning an operatic air.

Paolo Caliari (1528–88), known as Veronese because he hailed from Verona, is best known for huge, high-colored paintings of Biblical feasts and stunning ceiling and wall paintings in church and civic buildings in Venice. His busy canvases teem with miscellaneous figures in elaborate costumes-“a cast of thousands,” Brilliant says, “like a Cecil B. DeMille movie.”

Of more than 50 paintings and drawings on display from American collections, many are masterpieces by any reckoning. “It’s the most ambitious show the Ringling has done,” Brilliant says, adding, “probably ever.”

The Ringling installation is as extravagant as the painter’s style, featuring not just salvaged columns but sparkling vitrines of vintage textiles, like a length of burgundy-colored damask shot with gold embroidery and a velvet-and-silk cloak. “Veronese’s draperies are some of the most remarkable things you notice as an important element in his paintings,” Brilliant says. Showing the role textiles played in Venice’s material culture and what they express in the painting highlights Veronese’s illusionistic skill. Wall texts include sidebars on fashion and fabrics, discussing how he achieved the shimmering effects of satin and silk.

Ironically, it’s his bravura brushwork and tactile textiles that are grounds for disparaging Veronese as a lightweight. “He’s often dismissed as a decorative, elegant painter on the basis of these splendid draperies,” Brilliant says, an assessment that implies that “He spent all his time painting pretty clothes instead of applying himself to more noble ends.”

The show is a fashionista’s dream. In The Allegory of Venice Adoring the Virgin and Child (late 1570s), the female personification of La Serenissima wears an embroidered silk gown with lace cuffs and a gold brocade mantle, trimmed with ropes of pearls, diamonds, rubies and sapphires. The Virgin’s blue satin robe glistens with celestial light, a costume of which Ringling, pioneer of “The Greatest Show on Earth,” would have approved.

Besides such enjoyable frippery, the show offers new ideas about this old master. First, Brilliant speculates that Veronese’s plush, hedonistic style is a purposeful contrast to Titian and Tintoretto’s moody, intense scenes, which were designed to appeal to worldly tastes and lure sophisticated patrons.

Secondly, she notes “pictorial dissonance” in a painting like The Martyrdom and Last Communion of Saint Lucy (c. 1585), which Brilliant describes as “so pretty, with gorgeous architecture, fabulous fabrics, elegant poses and gestures.” The figures’ secular trappings—a stylish frame for a sacred subject—dazzle the eye. Veronese’s religiosity is highly urbane and technically virtuosic—perhaps superficial, one at first thinks.

Only when a viewer realizes the exquisitely attired Lucy is being stabbed in the breast while taking her last communion-a moment of sacrifice but hope of salvation—does a jolt of surprise strike. The tension between seductive splendor and shocking message “heightens the drama,” Brilliant argues, “making the moment of realization jarring and more upsetting.” In this reading, opulence and chromatic luminosity are aspects of Veronese’s strategy to engage the viewer before sticking in the shiv of tragic import.

Yet the smiling aspects of Veronese’s art will always outshine the shadows. Even in his late paintings of Christ’s crucifixion, where his palette darkens, he eschews Tintoretto’s gloom and Titian’s melancholy. “Never was a painter more nobly joyous,” the novelist Henry James wrote, summing up: “He was the happiest of painters.”

Brilliant agrees but insists: “That doesn’t mean there isn’t depth and substance and a lot to explore.”